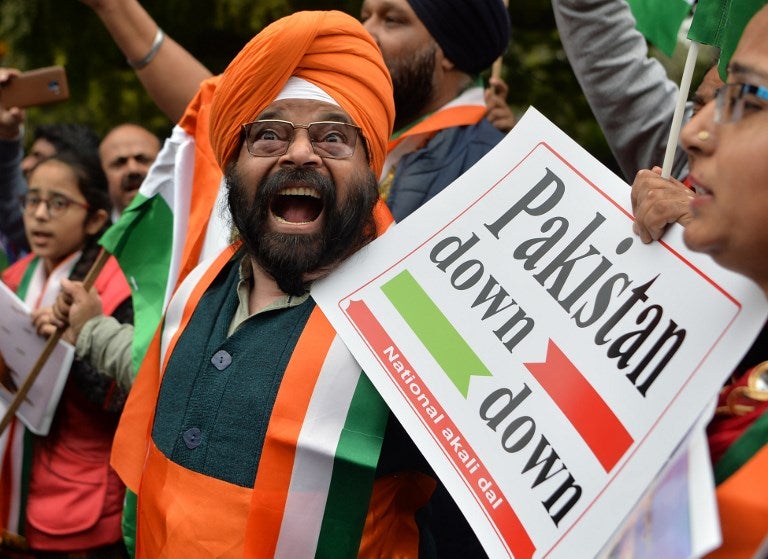 President of the National Akali Dal party Paramjeet Singh Pamma (center) holds a placard while shouting anti-Pakistan slogans during a demonstration in New Delhi on February 26, 2019, as they celebrate the Indian Air Force (IAF) strike launched on a Jaish-e-Mohammad (JeM) camp in Balakot. India said its warplanes attacked a militant camp where Pakistan-backed fighters were preparing suicide attacks on its cities, sending tensions between the arch-rivals to a new peak. AFP

Pakistan denied India’s claim that the attack inflicted major damage and casualties on militants responsible for a suicide bombing in Kashmir earlier this month as “reckless and fictitious,” and said it would respond in due course.

The attack, if confirmed, would be India’s first use of air strikes against Pakistan since 1971 when the two went to war over Bangladesh’s independence.

The incursion across the ceasefire line that divides Kashmir came after India threatened retaliation over the February 14 suicide bombing, claimed by the Pakistan-based Jaish-e-Mohammad (JeM) group, that killed 40 Indian troops.

The escalation has triggered international alarm, with China and the European Union calling for both sides to show restraint.

Pakistan said it scrambled its fighters to push back the intruders, condemning the “uncalled-for aggression” and denying a militant camp was targeted.

Foreign Minister Shah Mehmood Qureshi said Islamabad would “respond at the time and place of its choosing”.

Pakistan military spokesman Major General Asif Ghafoor tweeted that the Indian jets had crossed the Line of Control that divides Indian- and Pakistani-administered Kashmir and that they had merely released a “payload in haste while escaping” near Balakot.

He did not say what was meant by a “payload”.

India’s foreign ministry also said the camp was at Balakot, but gave no further detail and the exact location remained unclear.

Balakot is in Pakistan’s northwestern Khyber-Pakhtunkhwa province, a few kilometers outside of the portion of Kashmir it controls.

A strike inside undisputed Pakistani territory would be a serious heightening of the bitter rivalry between the two countries.

Residents in Balakot described hearing at least four explosions overnight, but said the damage was minimal.

“There is one house near the place whose wall has collapsed, and one person got minor injuries,” said 25-year-old Zubari Afzal.

The Pakistani military escorted journalists to the site where it said the payload had been dropped.

An AFP reporter could see a crater roughly six feet deep and equally wide, and two trees snapped in half, but the only nearby buildings were three mud houses, one with a collapsed wall.

In a separate incident in Pakistani Kashmir, four civilians were killed and ten others injured in cross-border firing Tuesday, officials said.

Khan also convened a meeting for Wednesday of the National Command Authority, which oversees command and control of the country’s nuclear arsenal, the military said.

Modi, who is expected to call an election in April, had threatened a “jaw-breaking” response to the February 14 attack.

But at a rally on Tuesday, the Indian leader did not directly mention the strike. He paid tribute to the military and said: “I assure the nation that the country is in safe hands.”

Other officials said the strike displayed India’s determination to act against Pakistan.

“They say they want India to bleed with a 1,000 cuts. We say that each time you attack us, be certain we will get back at you, harder and stronger,” said foreign affairs minister of state, Vijay Kumar Singh, a former head of the Indian army.

While India has consistently accused its neighbor of supporting extremist groups, Pakistan has equally vehemently denied any role in attacks in India and its only Muslim-majority state, Kashmir.

This is the biggest crisis between the neighbors since 2016, when Pakistan-based militants attacked an Indian army camp in Kashmir, killing 19 soldiers.

In response, India launched what it called “surgical strikes” in Pakistani Kashmir. Islamabad denied the strikes ever took place.

“If such actions continue, it can escalate into major conflict, which will not serve any purpose but to plunge the region into serious crisis,” he said.

However, Samir Saran, president of the Observer Research Foundation think tank in New Delhi, said the fact that India remained vague over the exact spot targeted was a sign it did not want an all-out conflict.

“This is to take the pressure off Pakistanis. We are still telling them that we don’t want an escalation. Which is why we have said that we have taken a preemptive measure. You don’t have to make this into a war, if you don’t want to,” he said. /cbb