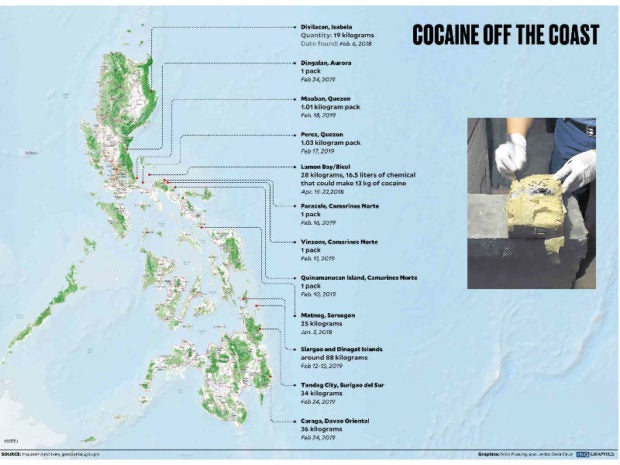 COCAINE OFF THE COAST At least 230 kilograms of cocaine with an estimated value of P1.32 billion have been recovered on the eastern shores and waters of the country from January last year to Feb. 24 this year.

President Rodrigo Duterte has warned that the country was “in danger” following the entry of an international drug syndicate dealing in cocaine from clear across the Pacific.

“We are facing a serious problem,” he said in remarks at the national assembly of the Liga ng mga Barangay sa Pilipinas in Pasay City on Monday night. “The Medellin Cartel of Colombia has entered the country so we will be seeing a lot of cocaine.”

“We are in danger because on the right side, Mexico and even Medellin of Colombia is bringing cocaine in,” the President said.

Bricks of cocaine in waterproof wrappers have been recovered from some areas along the country’s eastern coastline, from Aurora province to Samar, down to Surigao del Sur and Davao Oriental.

The President earlier claimed that illegal drugs were being manufactured in fishing boats and then thrown overboard to be recovered by drug traffickers guided to their locations by GPS devices.

The President said the government was having a hard time guarding the country’s long coastlines due to a lack of patrol vessels.

The Philippine Drug Enforcement Agency (PDEA) said the phenomenon of drugs floating on coastal waters or washed ashore in the eastern parts of the country was unique to the Philippines.

“So far, [based on] our coordinations with other countries, it seems it is only in our country that this happens. They have not experienced anything similar to the ‘floating cocaine’ here,” PDEA Director General Aaron Aquino said in a radio interview on Tuesday.

A chemical examination of the cocaine recovered from the sea in the past indicated that they came from Colombia. But since the South American country is too far from the Philippines, the PDEA was looking at the Golden Triangle syndicates as the source because they also deal in cocaine and opium.

Aquino noted that there was only a small market for cocaine in the Philippines where the “drugs of choice” were still “shabu” (crystal meth), ecstasy and marijuana. 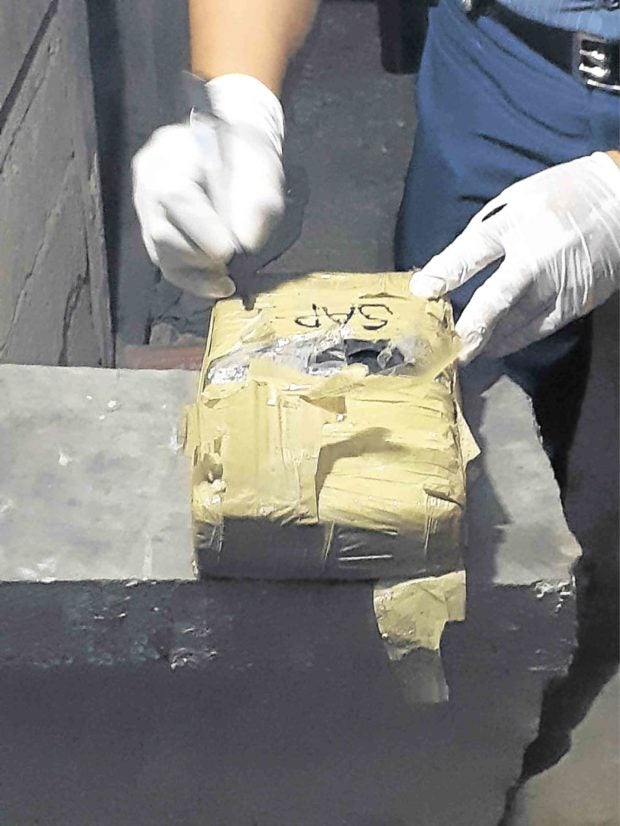 TRACING THE SOURCE Chemical analysis of the cocaine bricks recently found in Philippine waters and coastal areas indicates that the drug was manufactured in Colombia, but Golden Triangle drug traffickers make them the same way as the Colombians, according to the Philippine Drug Enforcement Agency. —PHOTO FROM QUEZON POLICE

This would suggest, he said, that the cocaine that was recovered was likely intended for the Chinese, Hong Kong and Australian markets and the Philippines was only a transshipment point, or it could have been intentionally left as “decoy” to divert attention from a possible larger narcotics shipment through other poorly guarded coastal areas.

“Because the question is, if they had GPS, why has nobody retrieved them? That’s why the diversionary tactic angle floated up. Like they’re letting go of a small amount while a bigger amount is smuggled,” Aquino said.

He added that some of the cocaine bricks had been at sea for several months before they were discovered as shown by barnacles that had grown on them.

He said the blocks of cocaine recovered from different parts of the eastern seaboard totaled 165 kilograms and estimated to be worth P871.6 million.

War to be ‘harsher’

Based on Inquirer reports, the cocaine recovered was at least 230 kg, valued at P1.32 billion.

The President last week said his war on drugs would be “harsher” as he expressed alarm over the entry of international drug syndicates, including the Sinaloa cartel of Mexico and the Asian Bamboo Triad.

He promised he would make the last three years of his term “very dangerous to live in” for those involved in illegal drugs.

“If you’re a drug lord, I don’t care if you’re from China, Taiwan, Malaysia. If you go here, I will kill you,” he said.

Sen. Panfilo “Ping” Lacson said Filipinos should expect another bloody period after the President issued the warning because the chief executive “is racing against what is left of his six-year term.”

“We should therefore brace ourselves for a repeat of the first one and a half years of his presidency when Filipinos witnessed the bloodiest campaign against illegal drugs ever experienced in this part of the world,” he told reporters in a text message.

The PNP and the PDEA reported that more than 5,000 had been killed in police antidrug operations since July 2016, but human rights groups said the number was multiple times higher.

Sen. Antonio Trillanes IV, one of the President’s most strident critics, said only the poor would bear the brunt of the campaign as the government had failed to go after top-level drug lords.

Sen. Sherwin Gatchalian said he could not blame the President for declaring a more violent drug war.

“However, this harsher campaign should be focused on the drug lords—identify the heads of the drug cartels who bring in illegal drugs to our country so that the full force of the law can be imposed upon them,” he said.

Senate President Vicente Sotto III said the discovery of the floating cocaine bricks underscored the need to activate the Barangay Anti-Drug Abuse Council as spelled out in Republic Act No. 9165, or the Comprehensive Dangerous Drugs Act of 2002. —Reports from Julie M. Aurelio, Marlon Ramos and Jaymee T. Gamil