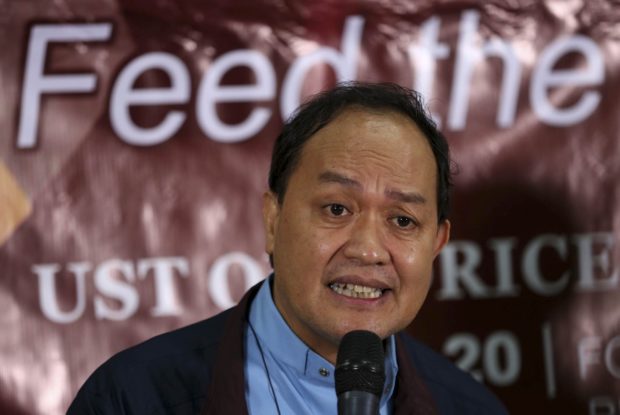 On Tuesday, David said his life was in danger so he decided to skip the Ka Pepe Diokno Human Rights Awards in De La Salle University (DLSU) Manila.

“For over a week now my mobile phone has been buzzing with text messages written in screaming and capital letters telling me that I was next in line for execution,” David said through a letter read by his brother Randy.

“Well-meaning friends who are worried for my personal safety have advised me not to take this threat lightly. I am begging off from today’s event,” David added.

“What is paramount is I don’t want to endanger the lives of those who would accompany me to this venue.”

Standing up to President

At the height of the bloody war on drugs in 2017, David was one of the few bishops who took a stand against the killing of drug suspects.

He gave a Mass for Raymart Siapo, the 19-year-old boy from Navotas, who was killed by 14 armed men after a neighbor accused him of peddling marijuana in front of barangay officials.

Since then, David has never stopped speaking against the police and extrajudicial killings. For serving as the bishop overseeing Caloocan, Malabon and Navotas, he was merely doing his job, he said.

These cities have the highest number of people killed in Mr. Duterte’s war on drugs.

In these areas, David put up mission stations so that the people, especially those in slums, had a place to run to for help.

Threat from the President

Last November, the President threatened to kill him.

“David! I’m beginning to suspect why you’re frequently roaming around at night. You could be into drugs,” said the President at the groundbreaking of a water supply project in Davao City.

In the same speech, the President threatened to have the head of a bishop cut if he was found to be buying drugs, without naming anyone in particular.

David, vice president of the Catholic Bishops’ Conference of the Philippines, didn’t take this sitting down.

He immediately responded to the President’s threats through a Facebook post: “Into drugs? No, Sir, I’m not into drugs of any sort, whether legal or illegal. Never been.”

In recognizing David, DLSU law school dean Chel Diokno, a son of Pepe Diokno, a former senator imprisoned by dictator Ferdinand Marcos, said the bishop affirmed the value of human life “when it is increasingly devalued.”

“The foundation recognized Bishop David’s unwavering commitment to human dignity and the right of all, most especially of the poor,” Diokno said.

The younger Diokno, a senatorial candidate and a human rights defender, called on the President to be responsible for the things that he says.

David was supposed to attend the Tuesday ceremony, where he and Maria Ressa, CEO of Rappler, an online news site critical of the President, were recipients of the awards.

Former President Benigno Aquino III and Vice President Leni Robredo attended the event. Both called on the public to do what was right.

In his letter, David said he had sent confirmation for his attendance but had to change his mind at the last minute, especially since uniformed policemen have been posted outside his residence in Caloocan.

“In the past 48 hours, high-ranking officials of the PNP have been trying to reach me to inquire about these threats to verify them and to offer me protection,” he said.

“Indeed, the other day, a detachment of uniformed police officers was posted just outside the cathedral grounds. I truly appreciate their concern. But I honestly don’t know what to make of all of these,” the bishop added.

According to David, the head of the Caloocan police had offered help. But he found this ironic.

“His superiors wished to provide me security services. I found this ironic and I let him know how I felt,” David said.

For the bishop, the “ultimate superior” of the Caloocan police was none other than Mr. Duterte.

“I recall he [Duterte] was the first to pose a grave threat against my life,” the bishop said.

He refused the Caloocan police chief’s offer and reminded him that after the President threatened his life last year, no one from the police rushed to offer help.

The bishop said other members of the clergy were also receiving death threats.

The President has apparently changed his tune after he told “tambay” (loiterers) to rob and kill bishops.

The President warned that those who would carry out violent attacks on bishops would end up being his enemy.

“You addicts should not take it seriously when I said you should hit bishops and cardinals,” he said on Monday night in Pasay in a speech at the national assembly of the Liga ng mga Barangay.

The President said that his earlier call against prelates should not be taken seriously.

He added that he had nothing to gain from ordering priests killed.

“What will I get if I have a priest killed? Many will become widows, who knows, the fool might have three girlfriends,”

Presidential spokesperson Salvador Panelo said the opposition was to blame for taking seriously the President’s instructions to idlers to rob and kill bishops.