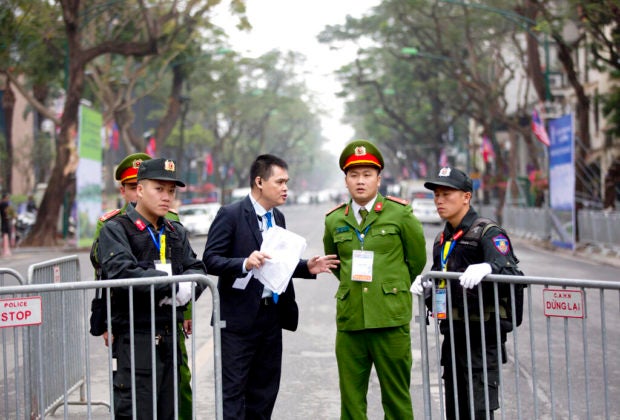 They were among the crowd of people and journalists gathered near a Hanoi hotel where Kim was staying following his arrival Tuesday.

One of the defectors, Shin Eun Ha, said she hopes the Kim-Trump summit would help achieve peace so that she’s allowed to return her hometown in the North’s northeastern town of Musan, which she fled in 2003.

“For defectors, North Korea isn’t a country of hatred but a place that we are desperate to go back even in our dreams,” Shin told The Associated Press. “I hope to see a day when we can go back to North Korea by taking a train that Kim Jong Un used to come here.”

She and her fellow defector came as part of a popular South Korean TV program featuring North Korean defectors. Shin, a 30-year nurse in Seoul, has been a regular guest on the program, titled “Now On My Way to Meet You.”

About 30,000 North Koreans have fled to South Korea since the end of the 1950-53 Korean War to avoid political oppression and economic difficulties. Shin said she left the North with her parents, who feared heavy punishment after they were caught making money from missionaries by passing out cassette tapes containing religious sermons and hymns to fellow North Koreans.

When Shin left, Kim’s father, Kim Jong Il, was North Korea’s leader, the second in a dynastic line that started with Kim Jong Un’s grandfather, Kim Il Sung, who is the country’s founder.

Shin said both Kim Jong Il and Kim Il Sung were “god-like figures” that she couldn’t even dare to publicly call their names when she was in North Korea. She said Tuesday was the first time for her to be in the same neighborhood with a North Korean leader.

Nam Hee Seok, a popular South Korean comedian who works on the TV program, said North Korean defectors appearing on the show hope to see peace established on the Korean Peninsula so that they can exchange letters with their relatives left in the North.

He said Vietnam is one the countries that some of the defectors had gone through before reaching South Korea./gsg