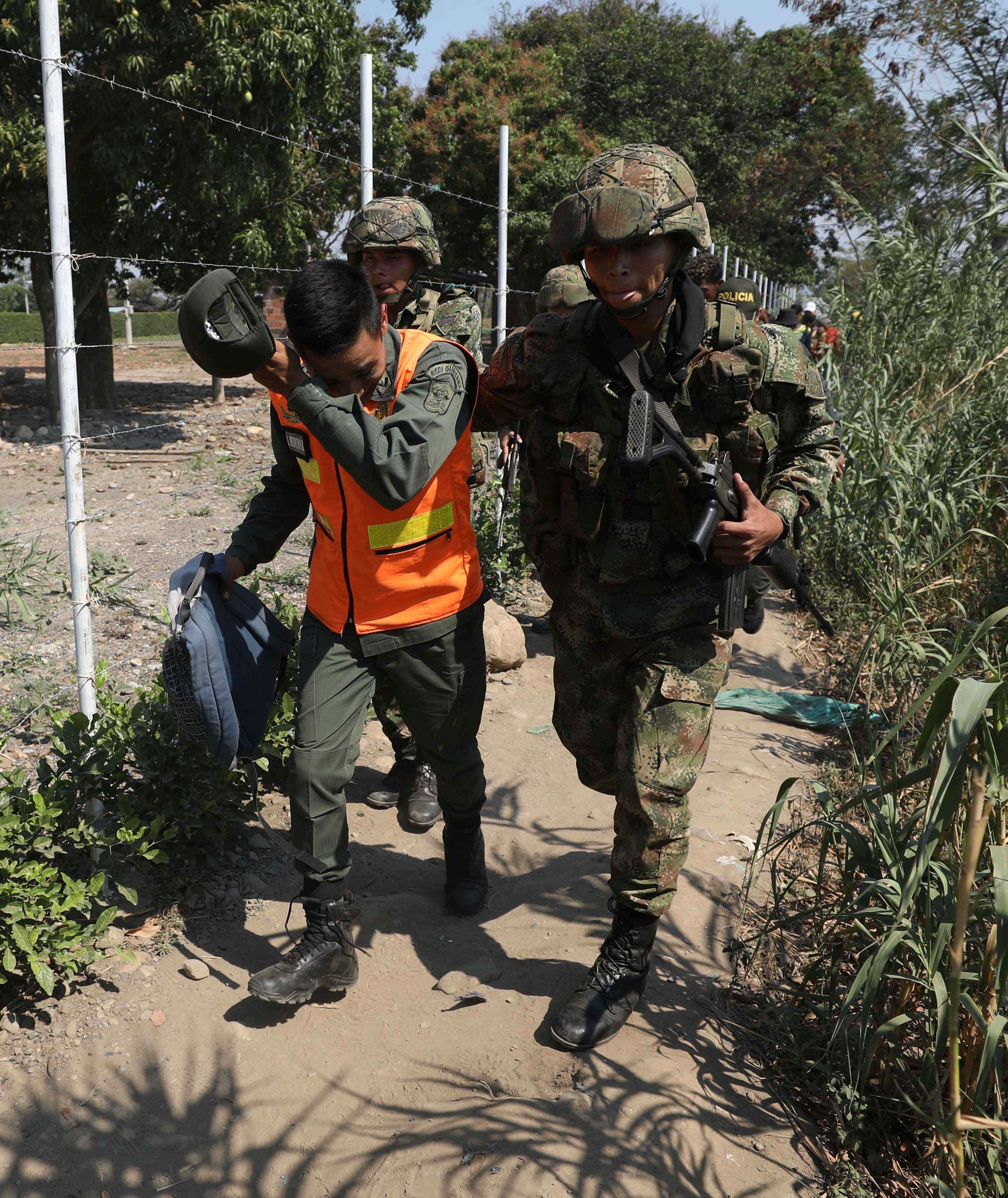 CUCUTA, Colombia  — The simple house on a street ridden with potholes in this town on Colombia’s restive border with Venezuela has become a refuge for the newly homeless — 40 Venezuelan soldiers who abandoned their posts and ran for their lives.

The young National Guard troops sleep on thin mats on the floor. In one room, several flak jackets rest along a wall. On a balcony, boots that got wet crossing the muddy Tachira River are set out to dry.

“I was tired of people seeing me as just one more of them,” Sgt. Jorge Torres said, referring to President Nicolas Maduro’s socialist government. “I’m not.”

A high-stakes plan by the Venezuelan opposition to bring humanitarian aid into the country floundered Saturday when troops loyal to Maduro refused to let the trucks carrying food and medical supplies cross, but it did set off a wave of military defections unlike any seen yet amid the country’s mounting crisis. Over 270 mostly low-ranking soldiers fled in a span of three days, Colombian immigration officials said Monday.

With no relatives in Colombia, several dozen have ended up in a shelter run by a priest. The home on a street with low-hanging electrical wires is where they are nervously keeping track of relatives left behind, figuring out how to apply for asylum and deciding what should come next.

“The only way for this government to leave, unfortunately, and all of Venezuela knows it, is for there to be a direct intervention,” said Sgt. Jose Gomez, a father of two. “The only one with that power is the international community.”

In interviews with The Associated Press, nine National Guard soldiers described the day that they were ordered by commanders to stop the humanitarian aid from entering Venezuela.

Fearful of being jailed, many complied with orders and admitted to launching tear gas at protesters. Two said they were part of a failed plot to get the aid in. All fled after making unplanned, split-second decisions with only the uniform on their backs.

“Son, if this decision is to save your life and so that there is change, do it,” Gomez said his father told him in a brief phone call before he sprinted across the border.

The defections come as the Venezuelan opposition puts pressure on the military to recognize congress leader Juan Guaido as the nation’s rightful president. Venezuela’s military has served as the traditional arbiter of political disputes, forcing out dictator Marcos Perez Jimenez in 1958. But the top military brass has stood fast with Maduro, who has shown no sign that he intends to relinquish power.

While Guaido has proposed amnesty to military officers who back him, the low-ranking soldiers who have defected say breaking ranks with Maduro is all but impossible.

Anyone who shows the slightest hint of disapproval risks arrest, they said, and jail has become increasingly synonymous with torture. Even those like Gomez, who wanted to see the aid brought in, followed orders to repress citizens. As Saturday grew increasingly tense, protesters threw rocks and gasoline bombs at him. He said he responded by throwing tear gas at them to protect himself.

Others at the home also had evidence of the resistance they faced that day: Torres still had blood caked beneath the skin on his nose from protesters kicking him on the ground after he surrendered to Colombian authorities. A young woman had a scratch across her cheek that she said came from a rock thrown by protesters.

During the clashes, armed pro-Maduro groups known as “colectivos” fired indiscriminately, and several of the soldiers said they feared being shot themselves. National Guard troops are equipped with crowd-control devices like rubber bullets and tear gas but do not carry any regular firearms.

Like the rest of the population struggling against hyperinflation expected to reach an eye-boggling 10 million percent this year, the soldiers also knew the indignities of life in Venezuela, where severe shortages of food and medicine have led to more than 3 million people leaving the country in recent years.

“You know that in your own home you don’t even have a kilo of rice,” said the female soldier, who requested anonymity, fearing for the safety of the children she left back home. “And I’m supposed to stay here fighting, why?”

Two months ago, Gomez watched as his newborn son died within 15 minutes because the hospital where his wife delivered did not have oxygen to pump into his failing lungs. Torres said an aunt died of cancer and an uncle succumbed to a curable stomach infection.

“That’s what pushed me to make this decision,” Torres said.

When Guaido first announced the aid push, Torres said that he and three soldiers in his barracks huddled and quietly discussed their options. As National Guard drivers, they had access to armored trucks. They hatched a plan to drive the vehicles across the Simon Bolivar International Bridge, breaking down the barricades that stood in the way and allowing opposition trucks to carry the aid in.

Saturday morning, Torres climb into one of the white-painted trucks and charged it across the bridge. Though he broke through several barricades, he also hit a woman trying to enter Colombia. She escaped serious injury, but he was forced to stop.

Getting out with his rifle in hand, Torres raised his arms in surrender and helped the woman toward an ambulance.

As one of the first deserters, he was quickly taken in and presented to Guaido, who had sneaked across the border into Colombia to oversee the aid launch.

Torres said he stood at attention and pledged his loyalty to the 35-year-old lawmaker recognized as Venezuela’s interim president by over 50 nations, including the United States and many Latin American countries.

“We’re still in time to change history,” he said Guaido told him.

For Gomez, the breaking point came when he saw another National Guardsman hit in the face by a fire bomb. Even though he was badly injured, commanders wouldn’t call an ambulance to take him to the hospital, Gomez said. Fearing what might happen if he himself was struck by protesters, he decided to flee.

“They wouldn’t have done anything for me,” Gomez said.

As he darted into one of the hundreds of illegal dirt paths snaking across Venezuela’s porous border with Colombia, Gomez said “colectivo” gunmen shot in his direction. He crossed the river and ran through the brush, about a 20-minute trek. When he reached Colombian territory and spotted the military, he put his hands up in a sign of peace.

“I’m coming to surrender!” he cried out.

Many said they worry their wives and children will face repercussions and they are concerned about how they will make ends meet. Many soldiers who have fled in the last year have had difficulty getting work, winding up making a meager living selling food on the streets.

Asked about who he left behind, Torres said, “My wife,” and burst into tears. Too choked up to speak about his daughter, he could only hold up fingers to show how old she is: Six.

Nearly all the defectors would support a foreign intervention in Venezuela and join in the fight.

Guaido called on the international community Saturday evening to consider “all options” to resolve Venezuela’s crisis after the clashes over the aid shipments resulted in four deaths and 300 people injured.

In a visit Monday to Colombia’s capital for a meeting of regional leaders, U.S. Vice President Mike Pence echoed Donald Trump’s warning that “all options are on the table,” but he gingerly avoided talking about the potential for military action.

Floating ideas among each other, several of the defectors said they believe the best way forward is for more troops to desert and help form a resistance from abroad. Some envisioned an intervention led solely by Venezuelans, while others are convinced it can only be done with the help of an international coalition.

All said they don’t see themselves as traitors, but rather as troops intent on restoring Venezuela’s democracy.