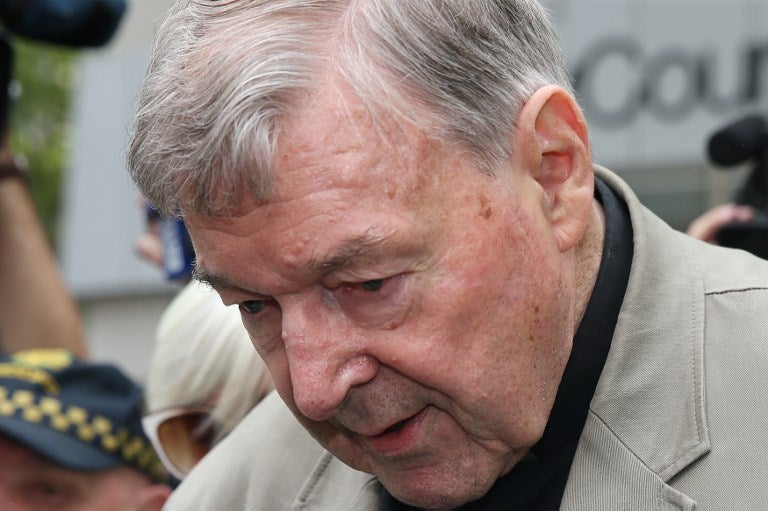 Cardinal George Pell leaves the County Court of Victoria court after prosecutors decided not to proceed with a second trial on alleged historical child sexual offenses in Melbourne on February 26, 2019. Australian Pell, who helped elect popes and ran the Vatican’s finances, has been found guilty of sexually assaulting two choirboys, becoming the most senior Catholic cleric ever convicted of child sex crimes. AFP

An Australian court found Pell guilty by a trial jury on one count of sexual abuse and four counts of indecent assault of two boys at Saint Patrick’s Cathedral in Melbourne in the 1990s.

Pell, now aged 77, was accused of cornering the boys — then aged 12 and 13 — in the cathedral’s sacristy and forcing them to perform a sex act on him.

The cleric, who has remained free on bail, denied all the charges and an initial trial ended with a hung jury in September, but he was convicted on retrial on December 11.

A wide-ranging gag order from the presiding judge had prevented the media from reporting even the existence of court proceedings and the ensuing trials since May.

The suppression order was lifted during a court hearing on Tuesday when prosecutors decided against proceeding with a planned second trial dealing with separate allegations against Pell.

Pell has steadfastly denied all the allegations against him and has lodged an appeal.

Child abuse survivor advocates yelled “monster” and “rot in hell” as Pell, walking slowly with the aid of a cane, left the County Court of Victoria and entered a car.

“It is a miracle. It is unbelievable,” one survivor who only gave his name as Michael, told reporters outside the court, adding that he wanted to see the cleric excommunicated from the Church and in jail.

Of the two choirboys that Pell was found to have assaulted, one died in 2014 and the second said in a statement issued by his lawyer Tuesday that the ongoing legal process was stressful and “not over yet”.

“At some point we realize that we trusted someone we should have feared and we fear those genuine relationships that we should trust.”

A pre-sentencing hearing is scheduled for Wednesday, when Pell is expected to be remanded in custody.

His conviction is another hammer blow to the Church, which has struggled to convince the world it is serious about tackling widespread child abuse and pedophilia.

“We are dealing with abominable crimes that must be erased from the face of the earth,” Francis said in closing remarks to the summit on Sunday, vowing to deal with every case of abuse “with the utmost seriousness”.

But critics say the institution is still moving too slowly in dealing with a problem that is global in scale and, at minimum, spans decades.

Days after Pell was convicted in secret, the Church announced he had been pulled off a panel of cardinals that make up the Pope’s cabinet and closest advisors.

But he has remained in his position as Vatican treasurer, effectively the church’s third-ranking official, although he has been on extended leave since his indictment.

Pell’s case has caused consternation in Australia, where he had once been praised by luminaries from a prime minister down and was a leading conservative voice on issues ranging from gay marriage to climate change.

He was named in 2003 to the Vatican’s powerful College of Cardinals, a position that allowed him to vote in the conclaves that elected popes Benedict and Francis.

In 2014, he was handpicked by Pope Francis to make the church’s finances more transparent.

For decades, Pell denied being an abuser or covering up sex abuse, but he did admit he “mucked up” in dealing with pedophile priests in the state of Victoria.

Australia’s media has strongly protested the gag order imposed on the case, which forbade them from even mentioning the existence of the trial or the order itself.

Following Pell’s December conviction, some international media reported the verdict, while local newspapers published front-page stories informing readers that a prominent Australian had been found guilty of serious crimes, but they were not allowed to reveal what or who.

Australian media said Tuesday that they subsequently received “show cause” letters from the court explaining why they should not face contempt charges for their reporting on the case.

Around one in five Australians are Catholic, roughly five million people.

A five-year royal commission inquiry into child abuse said in a report issued last year that tens of thousands of children had been sexually abused in Australian churches, orphanages, sporting clubs, youth groups and schools in a “national tragedy” over many generations.

Before Pell, the most high-profile case in Australia concerning sex abuse in the Church was the conviction earlier last year of the former archbishop of Adelaide, Philip Wilson, on charges of concealing crimes by a pedophile priest in the 1970s.