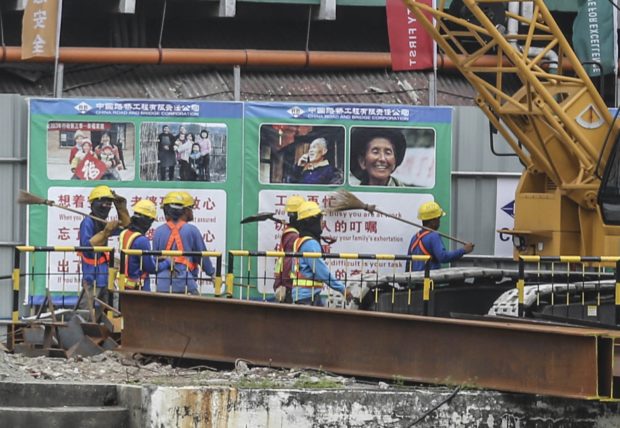 AT HOME IN MANILA Chinese workers walk past posters showing images of home as they begin the day’s work on the China-funded Binondo-Intramuros Bridge in Manila. —JOAN BONDOC

Senators, including those who support the administration, on Monday rejected President Rodrigo Duterte’s suggestion to allow Chinese illegally working in the Philippines to stay and keep their jobs to avoid a diplomatic controversy that could lead to the expulsion of thousands of Filipinos from China.

The Department of Labor and Employment (Dole) also rejected the President’s suggestion, saying if the Chinese would want to work here, they should secure all the legal requirements like all other foreigners working in the country.

“Dura lex, sed lex,” Senate President Vicente Sotto III said, using the Latin legal maxim that means “the law is harsh, but it is the law.”

“Deportation is a consequence if [domestic] laws are violated by foreigners,” Sotto said.

Speaking at a campaign rally of his administration’s senatorial candidates in Biñan City, Laguna province, on Sunday, the President said: “The Chinese here, just let them work here. Just let them. Why? We have 300,000 Filipinos in China.”

The President explained that he could not just order the deportation of Chinese illegally working in the Philippines because China might respond in kind.

Speaking in Cebu City later on Sunday, the President said there were 400,000 Filipinos in China.

“While there are senators who want to have the Chinese nationals deported, I said, ‘Why will I do that? There are 400,000 Filipinos there in China,’” he said.

Malacañang issued a clarification on Monday night, saying the President would enforce immigration laws on the illegal Chinese workers.

“We wish to clarify that the President’s policy on Chinese workers who are illegally staying in the country remains the same, which is the enforcement of immigration laws against violators,” presidential spokesperson Salvador Panelo said in a statement.

“Our laws will be applied with full force and effect equally to all foreign nationals who violate them,” he said.

Panelo added, however, that enforcement of immigration laws doesn’t mean “we shall act recklessly on perceived violations of Chinese citizens.”

“To do so would be a dangerous policy as we have, as the President stressed in his campaign rally speech, thousands of Filipinos in China and its government might enforce a policy of tit for tat to the detriment of our countrymen in China,” Panelo said.

The President’s remarks came a week after the Senate Committee on Labor, Employment and Human Resources, chaired by Sen. Joel Villanueva, resumed its inquiry into the influx of undocumented Chinese workers into the country.

During the hearing, Villanueva found that most of the Chinese tourists were unlawfully employed by Chinese-owned offshore gaming and business process outsourcing companies.

On Monday, Sen. Panfilo Lacson said the country’s immigration laws should be strictly enforced on all foreigners staying in the country.

“No exception, please—Chinese, Japanese, Americans. Even [those] from planet Mars,” Lacson said.

“Whatever the President says, I would rather that we give premium to Filipino workers by deporting foreign nationals illegally working here, and, worse, taking away scarce job opportunities from our own countrymen,” he added.

For Villanueva, the President might have been given “wrong data” about the number of Filipinos illegally working in China.

While it is true that many Filipinos are illegally working in other countries, he said, the issue should be centered on the proper implementation of domestic immigration policies.

Sen. Francis Pangilinan said unscrupulous officials of the Dole and the Bureau of Immigration should be sacked for consenting to the entry of undocumented Chinese workers.

“File criminal cases against them. Uphold the rule of law and without fanfare. Deport these illegals,” Pangilinan said in a statement.

According to Dominique Tutay, head of the Dole’s Bureau of Local Employment, it is important that Chinese nationals legally enter the Philippines as workers if they intend to work here.

“What we are seeing are those who come in as tourists but eventually become workers. The emphasis here is you have to really be documented [as a foreign worker],” Tutay told reporters on Monday.

The Nagkaisa labor coalition called Mr. Duterte’s stand on the issue “dereliction of [his] duty” to protect the rights of Filipino workers.

“It is incumbent upon the President to enforce the country’s laws on employing foreign nationals, be it Chinese or otherwise. If such foreigners violate our laws, they should be dealt with accordingly,” Nagkaisa spokesperson Rene Magtubo said.

“Making an unfounded fear as an argument of not implementing our laws on employing foreign nationals is a dereliction of duty on the part of the President and his labor secretary,” he added. —With reports from Jovic Yee and Christine O. Avendaño