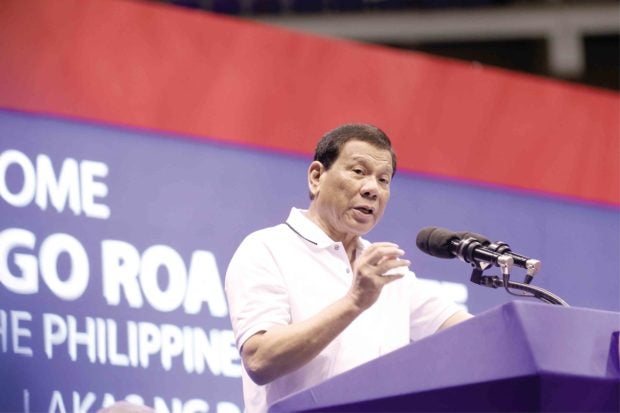 BIÑAN CITY — President Rodrigo Duterte would rather allow illegal Chinese workers here to stay, as deporting them might trigger tit for tat that could affect 300,000 Filipinos in China.

“The Chinese here, just let them work here. Just let them. Why? We have 300,000 Filipinos in China,” the President said during a campaign rally of the ruling Partido Demokratiko Pilipino-Lakas ng Bayan (PDP-Laban) in Biñan City, Laguna province, on Sunday.

The President’s remarks came after the Bureau of Immigration called in all foreigners working in the Philippines for a head count following reports that thousands of Chinese are entering the country as tourists but are disappearing in Chinese-controlled industries as illegal workers.

Last week, the Senate committee on labor, employment and human resources resumed an inquiry into the proliferation of illegal Chinese workers in the Philippines.

The inquiry began last year after Sen. Franklin Drilon, during a hearing on the budget of the Department of Labor and Employment (Dole) in September, expressed alarm over the mass arrivals of Chinese workers in the Philippines who were depriving Filipinos of jobs.

Drilon said he had learned from “industry people” that there were 400,000 foreign workers in Metro Manila alone, a third of them working in offshore gaming operations and business process outsourcing offices in Parañaque City.

At a hearing called by the Senate labor committee in November last year, immigration and labor officials admitted that more than 119,000 “tourists,” most of them from China, were able to skirt regulations and gained temporary employment in the country.

The Dole issues alien employment permits to foreigners to work at certain jobs here that no Filipinos are willing to take.

But Labor Undersecretary Ciriaco Lagunzad III told the Senate panel that the Chinese workers got jobs without alien employment permits by securing special work permits from the immigration bureau.

Lagunzad said more than 119,000 special work permits were issued by the immigration bureau from 2017 to 2018, but the actual number could be bigger, considering 1.6 million tourist visas were issued to Chinese citizens by the Department of Foreign Affairs in 2018 alone, and only 18 preemployment visas.

The President said at the time that Chinese nationals who entered the country on tourist visas but ended up working in online gaming companies here “should be deported.”

He cautioned, however, that “when you point to the Chinese, you also point at us,” the first indication that he was willing to go soft on Chinese illegals here for the sake of Filipinos working in China.

Mr. Duterte has come under criticism for his pivot to China for loans and grants to finance his ambitious infrastructure program, even putting aside a ruling in favor of the Philippines by the UN Permanent Court of Arbitration in a challenge to China’s claim to nearly all of the South China Sea, including waters within the country’s exclusive economic zone.

Earlier, labor groups also raised concerns over the increasing Chinese workers traffic into the Philippines. —WITH REPORTS FROM INQUIRER RESEARCH