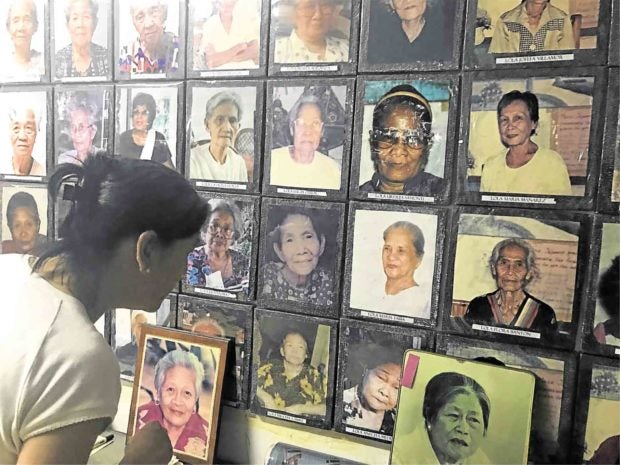 VICTIMS OF WAR ATROCITIES Sharon Cabusao-Silva, executive director of Lila Pilipina, says her group is chronicling the stories of comfort women and their descendants as a legacy to prevent the blurring of memory and to counter Philippine society’s “blunted rage against these atrocities.” —PHOTO COURTESY OF LILA PILIPINA RESOURCE CENTER

But death and old age have prevailed, and nowadays younger voices fill the quarters of the former “comfort women.”

Lila Pilipina is chronicling the stories of comfort women and their descendants as a form of “pamana” (legacy) to prevent the blurring of memory and to counter Philippine society’s “blunted rage against these atrocities.”

“What we’re trying to do now is gather the descendants of our members and chronicle their stories—how they discovered their mother’s or lola’s secret and how they coped with it,” said Lila Pilipina executive director Sharon Cabusao-Silva.

One of them is Eric, who now volunteers as the house’s caretaker.

“Eric feels a certain degree of responsibility for his mother’s legacy. Most of our volunteers here are students and former comfort women’s descendants,” Silva said.

But for advocates of the cause of Filipino comfort women, continuing the battle remains daunting in the face of unfavorable legal, political and social climates for justice and memorializing.

Rape of a community

A telling example is the case of the Malaya Lolas (Free Grandmothers) of Mapanique, Pampanga province.

“They do not fall under the technical definition of comfort women, so it is more difficult to ask for reparation and recognition,” said lawyer Virginia Suarez of the women’s group Kaisa Ka. “They were raped on Nov. 23, 1944, when over 800 Japanese soldiers invaded their town to crush the Filipino resistance movement, the Hukbalahap (Hukbo Laban sa Hapon).”

Suarez pointed out that the rape of the entire community was part of the strategy of war: defeating the enemy by demoralizing and terrorizing its population.

In 2004, the women through Centerlaw petitioned the Supreme Court to compel the Philippine government to represent all the victims of wartime military sexual slavery in seeking the accountability of the Japanese government for this “crime against humanity.”

But the Supreme Court dismissed the case.

Similar cases have been filed at the Supreme Court of Japan and in the United States, but many of these cases were also dismissed.

“Because allegedly, victims do not have the legal personality to file the case,” Suarez said, adding: “Several decisions declared that the case has to be initiated by the state—but our government won’t do that for us.”

While it may be true that taking up the petitioners’ case is not within the Supreme Court’s power, it can urge the executive branch to do so, Suarez said.

“The Supreme Court is the last bastion of justice, but it said it can’t do anything,” she said. “So where else can we run to?”

The Malaya Lolas and other survivors of military sexual slavery have been actively requesting the government for assistance in filing a claim for reparations against Japan since 1996.

But their song speaks of a sad truth: “Our history has borne us the bitter fruit.”

There’s a poignant line from one of the Malaya Lolas’ testimonies that Suarez, who has been leading their fight for justice, can never forget.

The woman’s husband had left her after discovering her past. He said he could not bear to live with the leftovers of a mad dog (“Hindi ko kayang kumain ng laman na tinira ng ulol na aso”).

“The pain and the shame were all over her,” Suarez said. “I kept on telling her: You shouldn’t be ashamed, Lola. It is the perpetrator who should be ashamed.”

For human rights lawyers like Suarez, the fight continues “even if it means a lost battle for some people.”

In Suarez’s view, this fight means redeeming the Filipino people’s integrity and dignity that were ravaged by centuries of colonization and subservience to global superpowers.

Both on the local and foreign fronts, Japan has consistently argued that compensation for comfort women have been fully satisfied by its government’s compliance with peace treaties and international agreements, including the San Francisco peace treaty of 1951 and bilateral agreements of 1956.

It has also become the official government line since the women came out to testify, Suarez said.

But advocates say that not even the National Fund for Peace in Asia for Women in 1995, said to be donated by Japanese civilians to survivors of military sexual slavery, could be considered a form of “national compensation.”

“At the time when the Reparation Act was entered into, our government was not aware of the existence of comfort women until 1991. How can an act signed in the 1950s ever cover something that has yet to be discovered?” Suarez said.

She said atonement for the women’s personal pain and agony had certainly not been covered by the agreements.

So what is limiting the government from fully supporting the cause of former comfort women?

For Suarez and Silva, the Philippines is being held hostage economically through debts and foreign aid and investments.

“The irony here is because we are not economically empowered, some of the lolas’ descendants eventually went on to become a Japayuki (an entertainer in Japan) because life here is hard. And poverty is almost always being used to further deny them justice,” Suarez said.

The Malaya Lolas continue to be voices in the wilderness: “We’re getting older and our hope has been depleted. Maybe our stories would just be buried in our graves. But the battle goes on.”

Said Suarez: “It may be frustrating now, but the lolas’ frustration because of this continuous refusal of the justice they’re seeking does not erase the fact that coming out has liberated them. It has somehow lessened the pain and agony.”

For the women and their advocates, a formal and public apology requires: an official acknowledgment of the wartime military sexual slavery committed by Japan, reparations for the injury and damage done to the victims, and historical inclusion and education, especially among the young.

She said the atrocities done in South Korea were so terrible that its people were being moved by patriotic fervor to seek justice for all victims.

But in the Philippines, the patriotic movement has to go beyond recognizing the “Pinoy identity,” she said.

“To understand our history is to know the facts and to understand the suffering that we underwent as a people and which continue to shape our current society,” Silva said. “The Philippine government and our politicians have a very big role to play.”