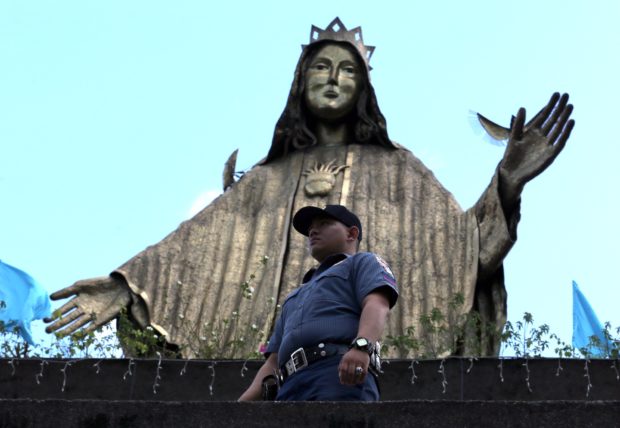 A police officer stands guard at the EDSA Shrine on the eve of the 30th anniversary celebration of EDSA People Power in 2016. (File photo by RAFFY LERMA / Philippine Daily Inquirer)

MANILA, Philippines — The Eastern Police District (EPD) will tighten security around the EDSA Shrine on Monday to ensure a peaceful celebration of the 33rd anniversary of People Power.

“Thus, the District Headquarters Red Team will be conducting surprise inspections in all PADs [Police Assistance Desks] and other posts where policemen are on duty to make sure 100% attendance of the more or less 1,100 deployed and reserve personnel,” he added.

According to Balba, members of the Civil Disturbance Management will already be in place in the early hours of Feb. 25 to secure the area.

These police officers, he said, would be on guard for any criminal activities that might be committed by militants.

The EPD will also coordinate with private and business establishments in Metro East near places of convergence.

Members of the Metro East Coordinating Council and the local government unit are also urged to implement security measures.

Balba encouraged the public to report to authorities any untoward incidents they might encounter during the event.

“The public can call us at 641-0877 / 09177283790; or they can also send us a message to our Facebook account at EPD Ang Pamamarisan and our Twitter account at @epdpio, and we are more than willing to assist everyone,“ Balba said. /atm