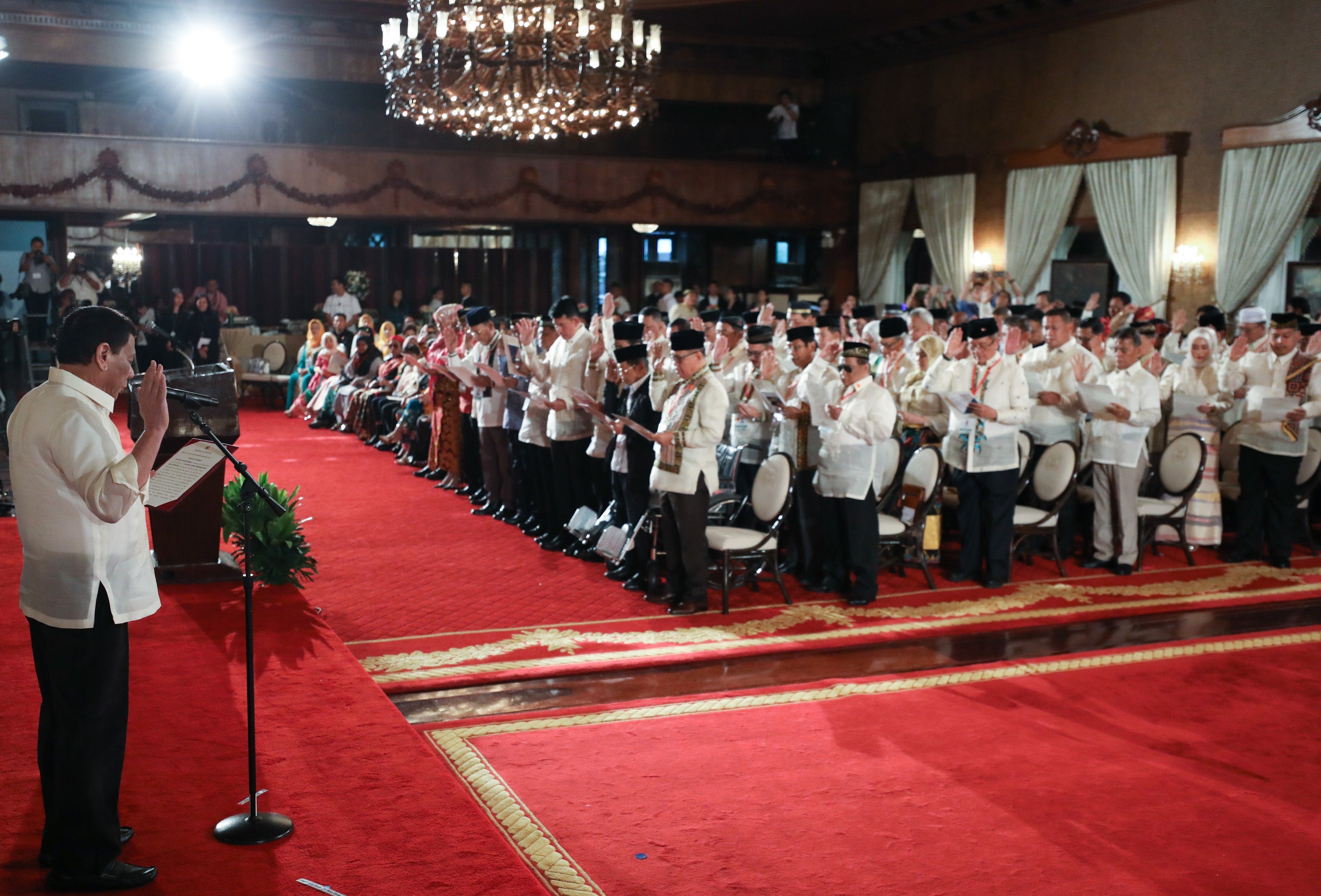 INTERIM GOVERNMENT President Duterte urged members of the interim government of the new Muslim autonomous region in Mindanao sworn into office on Friday to work for the best interest and welfare not only of the Bangsamoro but of all Filipinos in the region. —MALACAÑANG PHOTO

Even before members of the interim government of the new Muslim autonomous region could take their seats, some complaints are already emerging against the composition of the 80-member Bangsamoro Transition Authority (BTA).

Datu Ali Montaha Babao, speaker of the Bangsamoro People’s National Congress of the Moro National Liberation Front (MNLF), on Saturday expressed dissatisfaction over the mere five seats given to the MNLF in the BTA.

Babao said the MNLF central committee in Sulu under Yusop Jikiri nominated 22 members but only five were chosen. He appealed to the government to give more seats in  the BTA to the MNLF.

He lamented the small MNLF representation, saying in Filipino that “those who had prepared the food were not allowed to eat.”

‘They’ve been fooling us’

“The government, I don’t want to use harsh words here, but time and again, since Marcos, and until now, they have been fooling us,” Babao said, referring to the 1976 Tripoli Agreement between dictator Ferdinand Marcos and MNLF founder Nur Misuari.

“Hopefully, this Duterte administration will fulfill (its) promises. The government is bound to fulfill its commitment to the MNLF, to give the remaining 39 seats to the MNLF,” he said.

Going by the names plastered on the seats for the people who were to take their oaths as BTA members, there were only 68 who came to be sworn in by the President.

The President, however, said he had filled up all 80 seats.

“That’s why I was late (to the ceremonies). They had made late additions. There were some exchanges,” he told reporters after the rites on Friday.

One of the MNLF nominees who went to Malacañang but whose name was not called, Medzar Awali, deputy director general of the MNLF in Tawi-Tawi, said he felt something was not right in the selection process.

“I don’t mind my being not included in the BTA list but it is disturbing to note that only a handful were included, when there was an agreement to give more than 30 slots to the MNLF,” he added.

Khadafeh is one of the brothers of Maguindanao Gov. Esmael “Toto” Mangudadatu while Burahan is the secretary general of the League of Mayors of the Philippines who had pushed for the senatorial candidacy of the President’s former special assistant, Bong Go.

“We submitted a complete list and there was no politician in that list. But the last three minutes, it’s the most crucial when it comes to negotiations. If you don’t keep a close watch, anyone can just get in, there will be insertions,” he said.

“But it is already a government discretion. They will decide whoever they want to include in the BTA,” Iqbal said.

The five MNLF members in the BTA are Adzfar Usman and Udjah Sahie of Sulu, Punduma Sani of Marawi City, Romeo Sema of Maguindanao and Muslimin Jakilan of Basilan, according to Babao.

In addition to the 80 members of the BTA, the interim government also “automatically” includes the elected members of the ARMM, but they will serve only until June 30, according to the organic law.

The law says the BTA also should have representatives from non-Moro indigenous communities, youth, women, settler communities, traditional leaders and “other sectors,” but it isn’t clear on whether they will be in addition to or among the 80 to be appointed by the President. —With a report from Christine O. Avendaño and Sheila Mae dela Cruz