BOC to probe cause of fire in its Port Area building 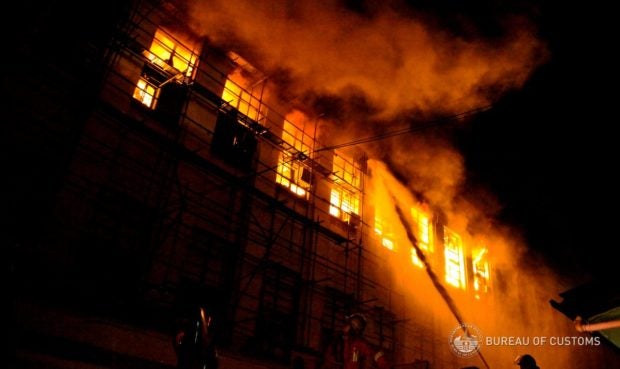 MANILA, Philippines — The Bureau of Customs (BOC) will conduct its own investigation of a fire that razed its building in Port Area, Manila.

“We have our Enforcement and Security Service securing the affected offices, and our Intelligence Group and the Customs Intelligence and Investigation Service have been tasked to identify the cause of the flame,” Customs Commissioner Rey Guerrero said in a statement on Saturday.

The fire which lasted for almost 10 hours started at about 9 p.m. at the part of the building near Gate 3 of the South Harbor on Friday.

The blaze was only put out at about 7 a.m. on Saturday.

The BOC also assured the public that its operations would not be affected by the fire.

“BOC’s fast recovery from this tragedy will be done. Now more than ever is the time for us to work together,” Guerrero said.

The BOC also confirmed that its Central Office and the Port of Manila would coordinate in restoring systems and facilities damaged by the fire.

“The situation requires that we restore and re-establish systems and facilities that were destroyed by the fire, at the soonest possible time, for us to resume normal operations,” Guerrero said. “The Port of Manila and the Central Office will be working during this long weekend in order to make this possible.” /atm