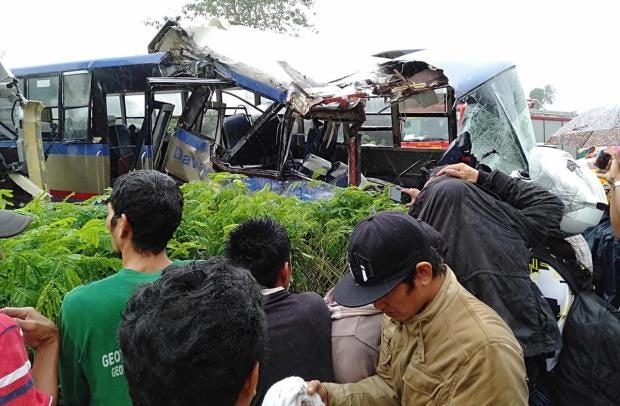 The right side of the Metro Express bus, which was headed for New Bataan in Compostela Valley, was smashed on colliding with a Bachelor Express bus headed for Davao City. The accident happened on Monday, Feb. 4, 2019, on Kilometer 91 of the Davao-Butuan highway. (Contributed photo)

MANILA, Philippines–Injured passengers and families of casualties of a road mishap involving two buses on Feb. 4 along Daang Maharlika Highway in Nabunturan, Compostela Valley received their compensation amounting to a total of P4.035 million in financial benefits.

According to the insarance company Passenger Accident Management and Insurance Agency (PAMI), it has turned over some P4.035 million of financial benefits to the nine casualties and two injured passengers of the two passenger buses that figured in a collision in Compostela Valley province.

Police reports disclosed the incident occurred at around 1:30 p.m. in the said location.

PAMI president Peaches Atayde-Buendia and PAMI operations manager and spokesman Bong Nocum personally handed over the insurance benefits to the families of the victims in Davao City.

Also present during the cash turnover were representatives from the Land Transportation and Franchising Regulatory Board (LTFRB) Region 11 office.

In a press briefing in Quezon City, Nocum said Davao Metro Shuttle Corporation whose terminal is located at Magugpo West, Tagum City paid a total of P3,635,000 to the nine casualties of its bus unit with license plate LXA-731.

Documents showed the nine casualties of the said bus firm received P400,000 except for the driver Hamber Khen Despi who was given P435,000 of insurance benefit.

Initially, Despi survived the road accident but eventually expired in the hospital as the attending physicians tried to revive him.

On the other hand, Bachelor Express Inc. the other bus company involved in the mishap paid Francisco Cabellida and Ruth Salopado P200,000 each as insurance compensation for their injuries.

Nocum said the accident insurance benefits increased from P200,000 to P400,000 effective January 1, 2019 based on the new LTFRB resolution.

He added the casualties and the injured passengers in the ill-fated vehicular crash were the first recipients of the increased accident insurance benefit of the newly approved LTFRB policy.

However, the resolution stated the insurance company is not liable to pay the driver or the conductor of the bus company if they are under the influence of alcohol or are tested positive of any prohibited substances when the accident occurred.

Also, the insurance company may not pay the driver, conductor or passengers of the said bus if it is proven that there were malicious acts or intent to gain from the incident.

In a letter sent to the Insurance Commission (IC), transport group 1-UTAK saw the need to review and re-evaluate the previous benefits under the 2016-2018 Enhanced Passenger Personal Accident Insurance Program that paved the way for the implementation of the new benefits.