Battle of the bands: Venezuela power struggle turns to music 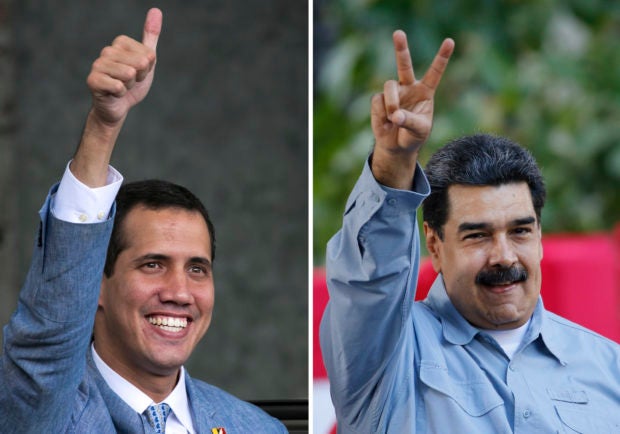 This photo combo of file photos shows opposition leader and self-proclaimed interim president of Venezuela Juan Guaido, left, on Feb. 8, 2019 and Venezuela’s President Nicolas Maduro, on Feb. 7, 2019, both in Caracas, Venezuela. Dueling concerts will literally set the stage for a showdown on Friday, Feb. 22, 2019, between Venezuela’s government and an opposition vowing to draw masses of people to push humanitarian aid into Venezuela despite Maduro’s objections. (AP Photos/Ariana Cubillos)

CUCUTA, Colombia — Venezuela’s power struggle is set to become a battle of the bands Friday when musicians demanding President Nicolas Maduro allow in humanitarian aid and those supporting his refusal sing in rival concerts being held at both sides of a border bridge where tons of donated food and medicine are stored.

The dueling concerts will literally set the stage for a showdown between Venezuela’s beleaguered government and opposition leaders who are pledging to draw masses of people to the country’s western border Saturday to try to usher in aid that Maduro has vowed not to accept into the country.

British billionaire Richard Branson is sponsoring a Live Aid-style concert featuring dozens of musicians including Latin rock star Juanes on one side of the border crossing that Colombian officials have renamed the “Unity Bridge,” while Maduro’s socialist government is promising a three-day festival deemed “Hands Off Venezuela” on the other.

“The eyes of the world will be on Venezuela,” opposition leader David Smolansky said in advance of the concert as he spoke with Venezuelan migrants at a soup kitchen in the border city of Cucuta where the aid is being stored. “We hope that everything that has happened these last few weeks is the beginning of the end.”

As Venezuela’s political turmoil drags on, allies of Juan Guaido, who is being recognized by over 50 nations as the country’s rightful president, are hoping the massive concert and aid push mark a turning point from which a transitional government is consolidated. But Maduro has shown no signs of backing down, and analysts warn that whatever happens over the next two days may not yield a conclusive victory for either side.

“I think one of the government’s aims is to confuse the whole thing, possibly to create some kind of chaos that makes the opposition look bad,” Phil Gunson, a senior analyst with the Crisis Group based in Caracas, said of Maduro’s rival concert. “It’s a propaganda war.”

Branson agreed to back a concert in early February after being approached by Guaido, Leopoldo Lopez, an opposition leader under house arrest, and others including Colombian entrepreneur Bruno Ocampo, who said the magnate is now so committed to getting humanitarian aid into Venezuela that he will personally stay until Saturday to help ensure that food and medical supplies make it across the border.

Similar to the original 1985 Live Aid concert, which raised funds to relieve the Ethiopian famine, Branson has set a goal to raise $100 million within 60 days.

“We didn’t know what we were getting into at the time,” Ocampo said Thursday. “But in less than 24 hours we are going to witness something historic.”

Friday’s concert won’t be the first time artists have used music to try and simmer tensions at the restive Colombia-Venezuela border. A concert known as Paz Sin Fronteras — Peace Without Borders — was held in 2008 after a diplomatic flare-up that drew Venezuelan troops to the Colombia border. That event was held on the Simon Bolivar International Bridge, which 33,000 people now use to enter Colombia each day. /gsg