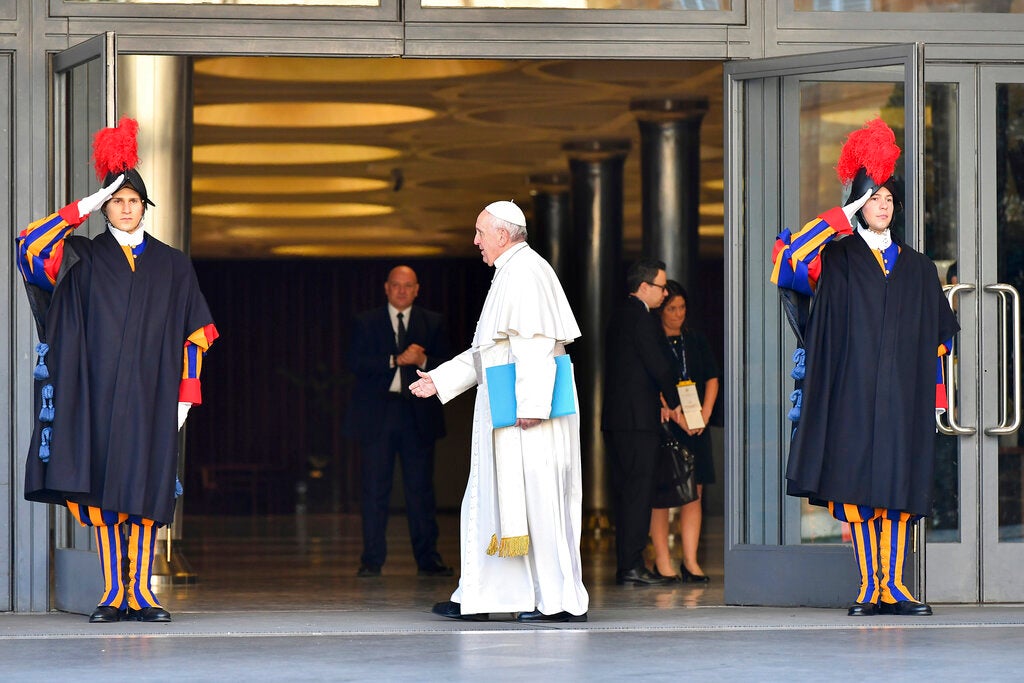 Pope Francis goes to greet a Vatican Swiss guard as he arrives for the opening of a sex abuse prevention summit, at the Vatican, Thursday, Feb. 21, 2019. The gathering of church leaders from around the globe is taking place amid intense scrutiny of the Catholic Church’s record after new allegations of abuse and cover-up last year sparked a credibility crisis for the hierarchy. (Vincenzo Pinto/Pool Photo via AP)

VATICAN CITY—Pope Francis opened a landmark Vatican conference on the sexual abuse of children by priests on Thursday by saying the Church would “listen to the cry of the little ones seeking justice.”

Victims expected “concrete and efficient measures” to deal with the abuse and scandal and not mere condemnations, Francis said in a short opening statement.

The “evil” of sexual abuse of children by priests had to be transformed into a “purification” of the Roman Catholic Church, he said.

After the Pope spoke, Cardinal Luis Antonio Tagle of the Philippines, who broke into tears as he read a keynote speech, acknowledged that “wounds have been inflicted by us, the bishops, on the victims.”

Tagle told the 190 heads of bishops’ conferences and religious orders that the wounds the clergy abuse scandal had caused among the faithful recalled the wounds of Christ on the cross.

How to deal with abuse

He demanded Church leaders no longer run in fear or turn a blind eye to the harm caused by abuses and their cover-ups.

“Faith that would like to close its eyes to people’s suffering is just an illusion,” Tagle said.

The Pope has set aside three and a half days to convince Catholic bishops to tackle pedophilia in a bid to contain a scandal that hit an already beleaguered Church again in 2018, from Chile to Germany and the United States.

“The holy people of God are watching and waiting not for simple and obvious condemnations but concrete and efficient measures,” Francis said.

“Let us listen to the cry of the young ones who ask us for justice,” he said.

The 82-year-old Pontiff hopes to raise awareness through prayers, speeches, working groups and testimonies from victims.

The idea is that the Church leaders will return home with clear ideas on how to spot and deal with abuse.

“My hope would be that people see this as a turning point,” said American Cardinal Blase Cupich, one of the Pope’s trusted allies in the United States and one of the summit’s four organizers.

The US Catholic Church has been shaken by one of the gravest crises in its history, with the defrocking last week by Pope Francis of a former cardinal,  American Theodore McCarrick, over accusations he sexually abused a teenager 50 years ago.

“It’s not the end game, no one can ever say that … [but] we’re going to do everything possible so people are held responsible, accountable and that there is going to be transparency,” Cupich told journalists ahead of the meeting.

These three themes—responsibility, accountability and transparency—will form the backbone of the summit and provide its 190 participants with the keys to ensuring child safety, he said.

There are reforms in the pipeline, such as the “tweaking” of certain canon laws, according to another of the organizers, Maltese Archbishop Charles Scicluna.

But the suggestion that Church laws need only fine-tuning has angered many, including Anne Barrett Doyle, the co-director of BishopAccountability.org, a public database that documents cases of proven or suspected cleric sex crimes.

“Canon law has to be changed: not tweaked, not modified, but fundamentally changed, so that it stops prioritizing the priesthood … over the lives of children, and vulnerable adults who are sexually assaulted by them,” she said. —REPORTS FROM AFP AND AP