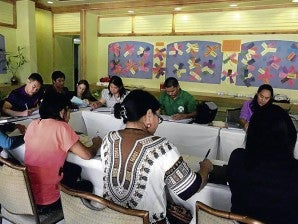 THE TEACHERS at work in a training session through which they hoped to improve their English communication and computer skills to pass on the knowledge to their students in conflict areas in Mindanao. TONETTE T. OREJAS / INQUIRER CENTRAL LUZON

Saralyn Sakilan says those roles are easier said than done.

Midway into the weeklong “Tudlo Mindanao” learning camp at the Clark Freeport in Pampanga last month, the 30-year-old Sakilan was monitoring how her parents were evacuating her children, aged 6 and 12, out of Maluso, a coastal town in Basilan, to Zamboanga City.

Sakilan was firm that she would stay and continue teaching Grade 6 pupils in Port Holland Elementary School in Maluso. “I can’t leave Maluso. I have no choice. If we teachers leave, what will happen to our students?” Sakilan said. “It’s important to teach peace.”

Peace, to her, is not merely the absence of war or fire fights. Among its forms, she says, is a situation where poverty is eased or ended, the rights of people, especially children, are respected, and people of different religion and culture can live together in harmony.

On top of these values and learning conflict management skills, Sakilan says it is important to be competent in writing, reading and listening in English, and in using the Internet and basic computer programs so students can learn the language and tools, and use these to increase their chances to get out of poverty. 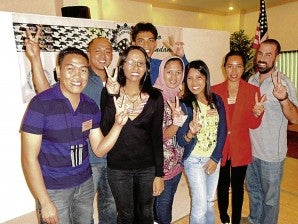 TEACHERS on a peace mission flash the peace sign during a break in their work. They hope to help solve conflicts in their communities through better communication skills, among others. TONETTE T. OREJAS / INQUIRER CENTRAL LUZON

Tudlo Mindanao is a project by the US Peace Corps and funded by the US Agency for International Development (USAID). Began in 2004 in cooperation with the Department of Education, it aims to enhance the basic education program in Mindanao.

The program has trained 2,200 teachers, supervisors and school administrators, says Monette Santos, manager of the US Peace Corps education sector.

For 2011 and 2012, the project is supported by $650,000 from the USAID, says Charlie Enciso, US Peace Corps director for programming and training. The Clark camp was planned in September before the outbreak of clashes in parts of Mindanao.

The trainers are US Peace Corps volunteers who, like Santos and Enciso, give time and talent to contribute to the development of the Philippines where it has been present for 50 years.

Teachers are highly valued in Lamitan’s Parang Basak National High School. Michael Rebollos and 15 of his colleagues go to and leave school on a van secured by two Army soldiers. Lamitan was the site of several kidnappings by the Abu Sayyaf in 2002.

“As the [school] intramurals were going on, we heard bombings. Our students stopped to listen but quickly proceeded with what they were doing,” Rebollos, 27, says.

“I’m not leaving. The Yakans are already neglected. They need to be helped,” he says.

Vilma Velasco, 42, says it is peaceful in Dipolog City, the capital of Zamboanga del Norte, but poverty is an enemy.

She helps develop peace in communities around St. John Elementary School by mobilizing parents in, among other things, sandbagging the cliff on which the school stands.

In the Tudlo Mindanao camp, Velasco says one of the teachers felt helpless after a student told her that his uncle used him to deliver ransom money.

“My student did not want me to report the incident to authorities because his uncle’s safety would be compromised. But his classmates were teasing him to part some money as commissions,” Velasco quotes the teacher as saying.

Marissa Pangal says that while Parang, Maguindanao, is very peaceful, soldiers are seen securing their town.

Carlito Dionedas of South Cotabato says he is worried because of the high dropout rate among his students in Lamba National High School in Banga town. Most of them leave school to farm but lands are few since most are rented to a multinational company. “Poverty is serious,” he says.

Florida Sajor of Koronadal City says the agrarian reform program didn’t work because the parents of most of her students remain tenants in large landholdings or landless.

Ezekiel Blan says his students at Sta. Lucia National High School in Pagadian City appeared to accept each other although they are a mix of Christians, Muslims and Subanens.

“One of them, a Muslim, volunteered to pray the ‘Our Father’ [of the Catholics]. No one protested. There was respect,” Blan says.

Velasco, a mentor for 20 years, said teachers take on the role of peacemakers because it is a “moral obligation.”