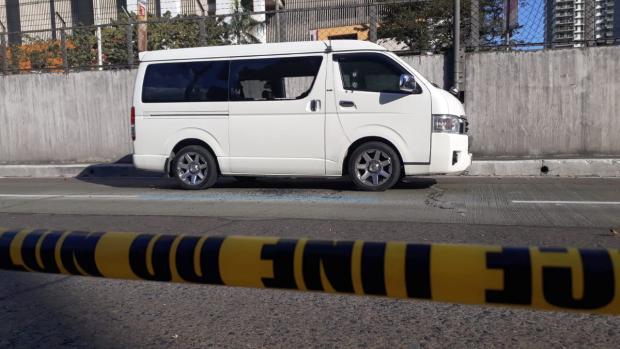 The bullet-riddled van where businessman Jose Luis Yulo and his driver were shot sits on Edsa near Reliance Street and the VRP Medical Center after the incident on Feb. 17, 2019. (Photo by RICHARD A. REYES / Philippine Daily Inquirer)

MANILA, Philippines — The businessman ambushed with his driver in broad daylight along Edsa had 31 firearms registered under his name, including 17 guns with expired permits, police said Thursday.

Jose Luis Yulo and his driver Allan Nomer Santos were on a Toyota Grandia when they were shot by motorcycle-riding gunmen in front of VRP Medical Center in Mandaluyong City on Sunday, Feb. 17, 2019.

Chief Supt. Bernabe Balba, director of the Eastern Police District, disclosed the gun ownership of Yulo as he clarified that the businessman was the respondent, not the complainant, in a grave threat case previously reported.

Fourteen complaints in relation to bouncing checks were also filed against him.

According to Balba, the grave threat case was apparently filed against Yulo by a woman in 1985.

Police have also secured footage of closed-circuit television cameras related to the murder.

Investigators earlier said they suspect that the ambush was related to Yulo’s businesses.

The victim is a namesake of Jose Luis U. Yulo Jr., president of the Chamber of Commerce of the Philippine Islands. /cbb