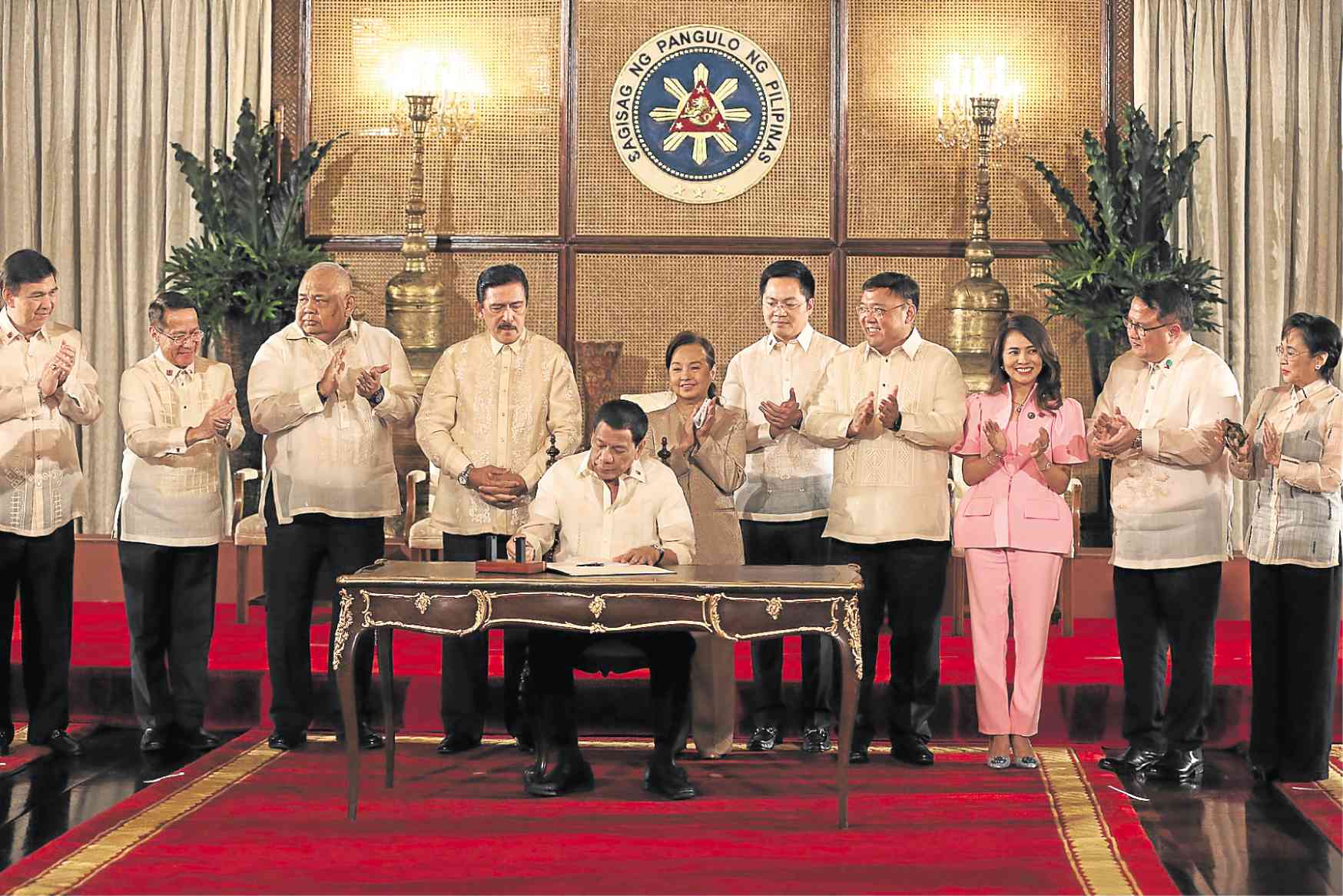 The Universal Health Care Act expands PhilHealth coverage to include all citizens of the Philippines, and its services to provide members free medical consultation, laboratory tests, and other diagnostic requirements.

The President hailed the new law, saying it “guarantee[s] equitable access to quality and affordable health care services for all Filipinos.”

The President also signed the Revised Corporation Code during an event in Malacañang that was attended by Senate President Vicente Sotto III, Speaker Gloria Macapagal-Arroyo and the legislators who wrote the two laws.

All are PhilHealth members

Under the new law, all Filipinos may seek primary health services even without PhilHealth identification cards.

The law also requires all graduates of health-related courses whose studies were funded through government scholarships to serve for at least three years in public hospitals.

Implementation of the law requires P257 billion in the first year, but it is given only P217 billion in the proposed P2019 national budget that the President has yet to sign.

Health Secretary Francisco Duque III earlier said the funding gap of P40 billion meant that not all the hospitals or health centers planned under the new law would be built.

Priority would be given to building village health centers so that residents would not need to go to hospitals for treatment of minor illnesses, Duque said.

Funds for implementation of the new law would come from taxes on sin products, Philippine Charity Sweepstakes Office, Philippine Amusement and Gaming Corp., Department of Health (DOH), government subsidy to PhilHealth and contributions of PhilHealth members.

In a statement released in Malacañang on Wednesday, the DOH said it was “actively working” for higher excise on tobacco and alcohol to ensure funds for the implementation of universal health care.

Presidential spokesperson Salvador Panelo said gradual implementation of the new law was likely due to the funding gap.

“But there are many ways to augment the resources. I’m sure the government will know how to source funds in accordance with the Constitution,” Panelo told reporters.

Describing the other newly signed laws, the President said the Revised Corporation Code “simplif[ies] corporate governance standards and establish[es] a more business friendly environment that will enable corporations and other judicial entities to thrive.”

During the ceremony, the President also oversaw the turnover of a check for P4 billion in BSP dividends to the National Treasury. —With a report from Daphne Galvez