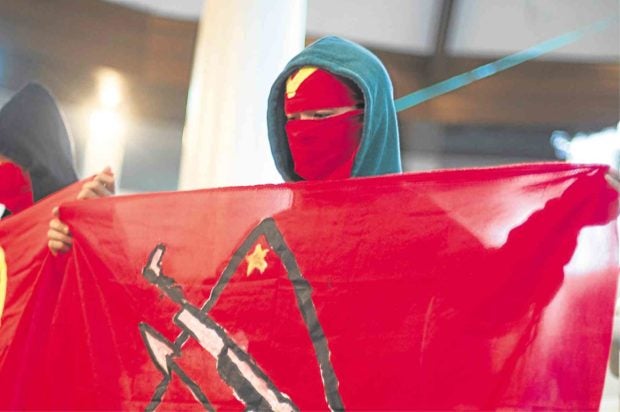 INCOGNITO A member of the New People’s Army visits the wake of UPLB student John Carlo Alberto, who was killed in a clash with the military in Laguna province. —CONTRIBUTED PHOTO

SAN PEDRO CITY—Student activists at the University of the Philippines Los Baños (UPLB) hailed as a martyr John Carlo Alberto, who was killed in a recent clash between New People’s Army (NPA) rebels and the Philippine Army in Laguna province.

Alberto, 22, and an undergraduate student of the College of Veterinary Medicine at UPLB, was the lone fatality in the Feb. 14 clash in Luisiana town.

Government soldiers were pursuing a group of rebels, responsible for burning construction equipment in Infanta, Quezon, last week, until they ran into an NPA camp in the village of San Buenaventura, Luisiana.

Alberto, who entered UPLB in 2013, was a graduate of the Pandan School of Arts and Trades in Pandan, a fourth class and remote town in Catanduanes province.

In 2015, he was arrested along with fellow youth activists in a rally staged during the Independence Day rites in Kawit, Cavite.

“Let’s pay homage to our martyr John Carlo “Ka Inocencio” Alberto,” read a message sent out by a youth sector alliance at UPLB.

It said a march and a tribute were being readied for Alberto.

Parayno said two more female rebels were believed to be heavily wounded from the clash citing blood trail found in the encounter site.

The women guerrillas, too, were described as young by residents near the clash site, Parayno said.

The Army said soldiers recovered at the clash site two improvised explosives, detonators, magazines, 10 tents, eight mobile phones and a computer tablet, which were believed to be rebels’ training materials.

Parayno said the Army believed there had been a “massive recruitment” by the NPA, particularly, at UPLB in recent years.

Parayno said documents found by soldiers in the NPA camps and clash sites pointed to UPLB as recruitment ground for rebels.

He said the military planned to discuss the matter with university officials soon.

He said he believed Alberto and those involved in the latest clash were on a tour of duty for the NPA, which could be a brief immersion period for new recruits in guerilla zones.

One indication that Alberto’s group was just on immersion was that it fired a “few shots but did not really engage the soldiers.”