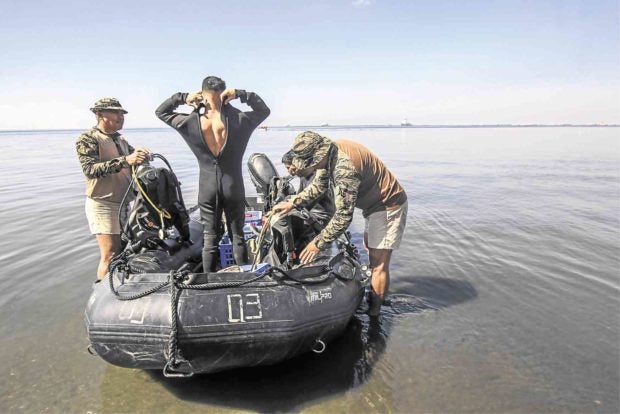 UNDERWATER INSPECTION A frogman from the Philippine Navy prepares to dive into Manila Bay to check on illegal pipelines as part of the government’s ongoing rehabilitation efforts. —EARVIN PERIAS

Several food establishments, including a popular fast-food chain and a well-known Filipino restaurant, have been slapped with cease-and-desist orders (CDOs) by the Laguna Lake Development Authority (LLDA), adding to the growing number of companies found to be polluting Manila Bay.

On Tuesday, LLDA teams served the order to the Jollibee branch on Macapagal Boulevard in Pasay City, and Max’s Restaurant on Maria Orosa Street in Ermita, Manila.

This was far above the standard of 200 mpn per 100 ml set by the Department of Environment and Natural Resources.

The Jollibee branch, however, was already closed as its management had earlier informed the LLDA that it would temporarily stop operating to allow the repair of its broken-down sewerage treatment plant.

On the other hand, the crew members and diners at the nearly-full Max’s Restaurant were caught by surprise when the LLDA personnel arrived around noon to serve the cease-and-desist order.

The establishment’s faucets, kitchen sinks, toilets, sewer lines and other sources of wastewater were subsequently shut.

Other establishments that were also issued cease-and-desist orders were HengFeng Kitchenette on F.B. Harrison Street in Pasay City, and Lamer Catering and Nihon Bashitei Japanese Food in Malate, Manila.

A total of 15 other firms were cited for environmental violations.

Issued ex-parte or show cause orders requiring them to explain why they should not be closed were Aloha Hostel, Sarmiti Food Corp. (Shawarma Snack Center) and Orix Auto Leasing Philippines Corp.

On the other hand, two buildings of the Cultural Center of the Philippines and a building belonging to the Overseas Workers Welfare Administration — all located in Pasay City — were tagged as polluters. They were given notices of violation for water pollution cases.

In Manila, the Heritage Condominium Corp., Ma. Natividad Building and Hyatt Hotel and Casino Manila were given similar notices.

A total of 63 establishments have been issued various orders and notices in connection with the government’s rehabilitation of Manila Bay, according to Emil Hernandez, LLDA environmental regulation department manager.

In a statement, Max’s Group Inc., the operator of Max’s Restaurant, said that since 2005, its Orosa branch had been discharging wastewater through the sewerage treatment plant of Maynilad.

It added that the restaurant had always been compliant with regulations on the proper discharge of wastewater. —With a report from Doris Dumlao-Abadilla