MMDA to utility firms: Remove wires from footbridge, or else…

MANILA, Philippines — The Metropolitan Manila Development Authority (MMDA) on Tuesday warned public utility companies that their firm’s service running through a pedestrian footbridge in Quezon City will be severed if they refuse to take action this week.

Reiterating its warning, MMDA said the concerned public utility firms have until Thursday to respond and remove the cables / wires going through a footbridge along Congressional Avenue.

MMDA, however did not identify the utility firms.

The agency said the utility companies have been given notices since July last year but have not responded.

“Please be informed that the matter was brought to the attention of concerned utility companies as early as July last year,” the agency said in a message sent to reporters.

“The MMDA has repeatedly asked utility companies to remove and relocate facilities that obstruct the walkway,” it added.

According to the agency, it already submitted notices to the utility companies last July 26 and August 2, 2018 and January 11 and February 14 this year.

A video by Pio Fortuno Jr. of the footbridge went viral on social media over the weekend due to the cable wire issue.

I don't know which is more dangerous – crossing the busy Mindanao Ave/Congressional Ave intersection below or the newly built elevated pedestrian walk that has utility wires on the path that force you to dance tinikling.

MMDA General Manager Jojo Garcia said that the footbridge in the video is not yet open to the public.

He also noted that there was a huge sign and barrier  stating that the footbridge is not yet open to the public.

Fortuno however, told INQUIRER.net in a message that there were no barriers at the entrance of the footbridge when he shot the viral video. / gsg

Below are the four notices sent by the MMDA to utility companies. 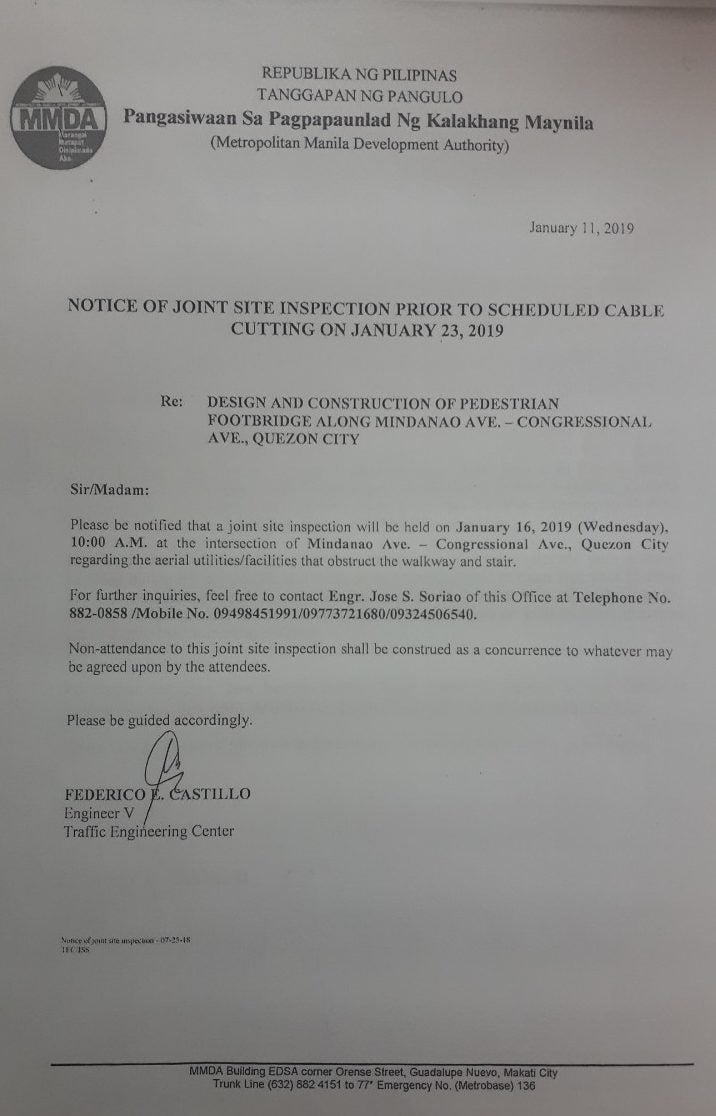 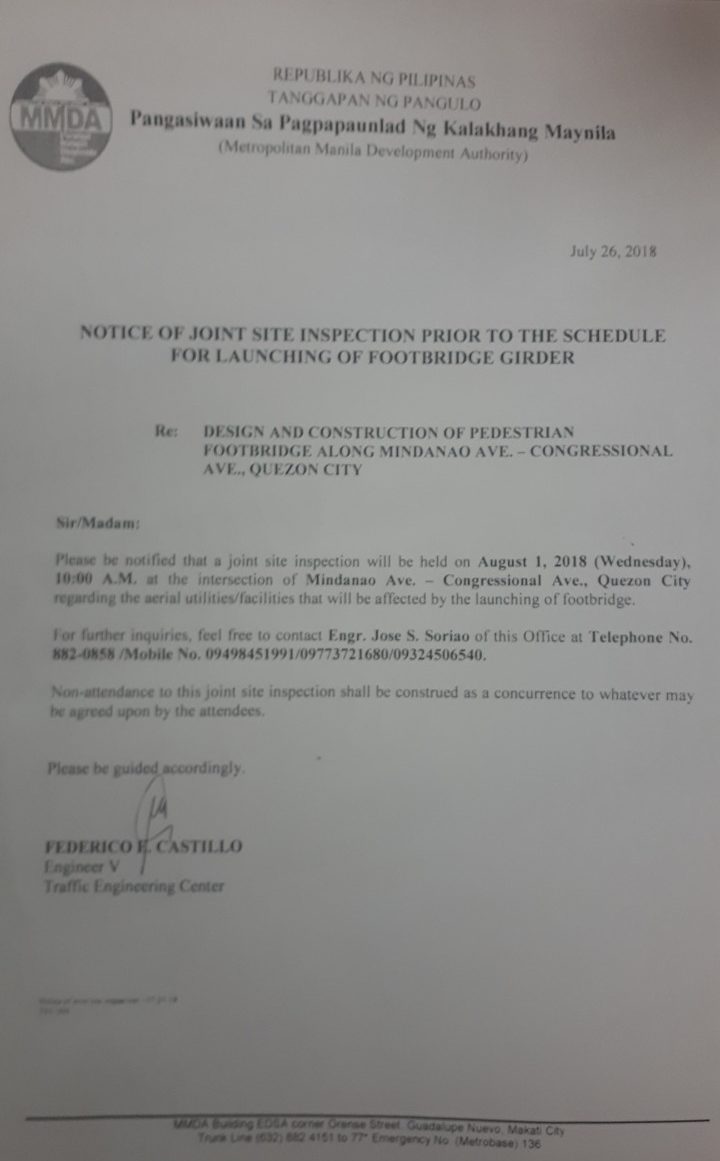 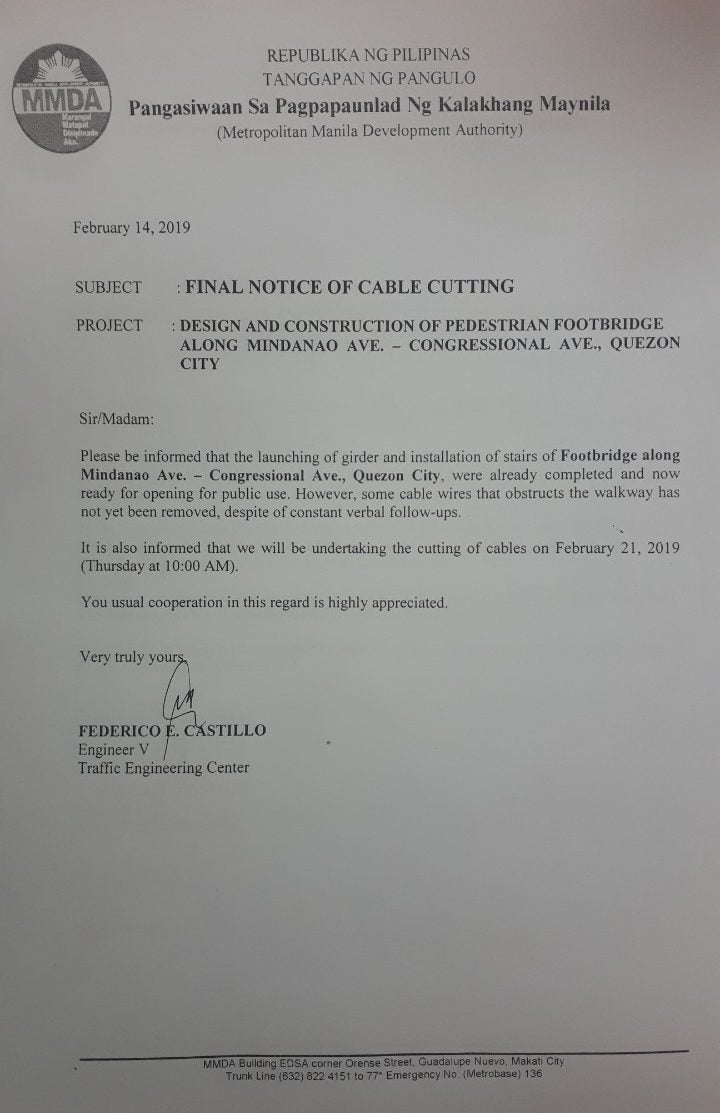 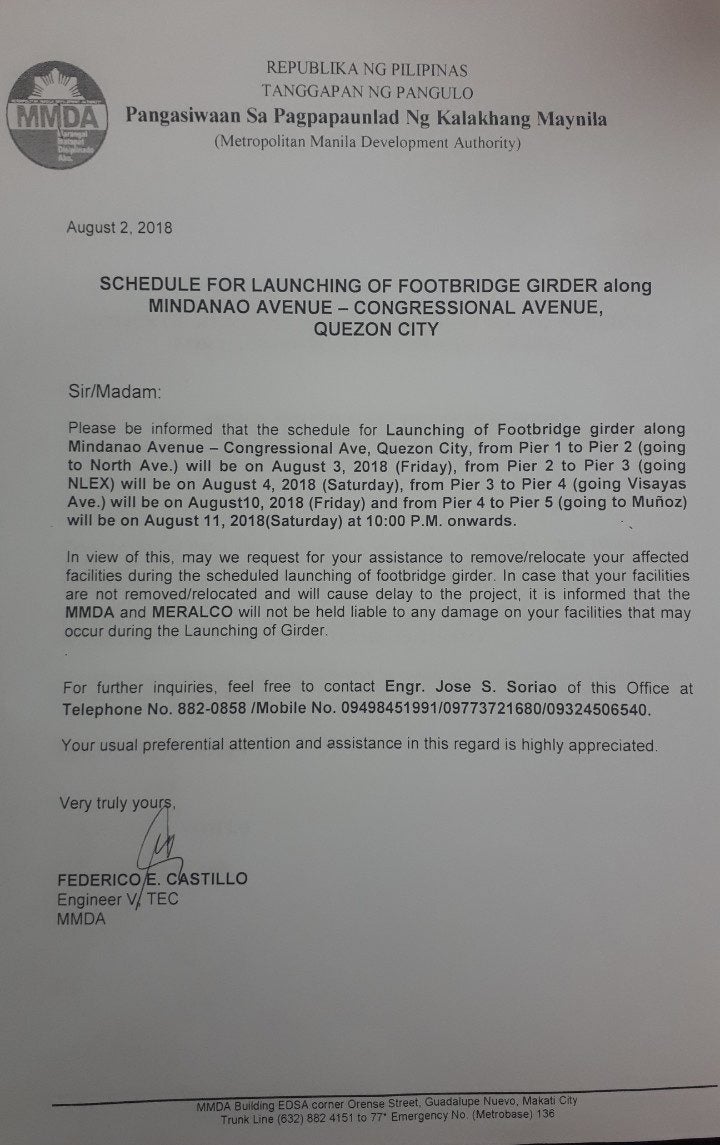 Read Next
Immigration nabs 276 foreign nationals in Makati
EDITORS' PICK
Omicron: What science knows so far about latest Greek-lettered COVID variant
Legarda: Ending Violence Against Women, a cause for all
This new condo in the South will make you want to turn a new leaf
Smart offers wireless fiber-like speeds to Filipino homes with country’s first 5G Prepaid Home WiFi
DOH: Booster doses for fully vaxxed adults to start December 3
NGCP transmission tower in Lanao del Sur bombed
MOST READ
‘Maski na hindi ‘yung mga bright’: Duterte urges public to elect new leaders
Pacquiao to voters: If you can’t vote for me, then don’t vote for a corrupt candidate
Roque defends Bongbong Marcos: ‘He was only 15 years old in 1972’
Another disqualification petition filed against Bongbong Marcos
Don't miss out on the latest news and information.