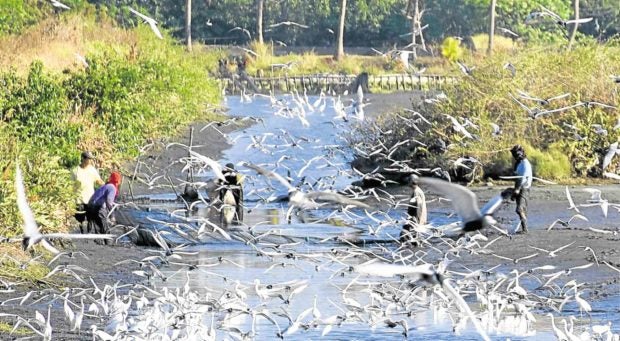 FEAST FOR BIRDS Migratory birds flock to a fishpond in Binmaley town, Pangasinan province, to catch fish as workers drain its water and clean the surrounding area. —WILLIE LOMIBAO

BINMALEY, Pangasinan — More migratory birds are seeking food and warm temporary habitats in this town’s wetlands, although local environment officials have noted other bird species are shying away from their usual abode.

“Some birds come and go every year, but this year other species have arrived while some old ones are gone or have yet to arrive,” said Angelica Esteban, ecosystem management specialist of the Community Environment and Natural Resources Office in Dagupan City.

Climate change might have altered the migration schedule of these birds, which come from China and Japan, Esteban said.

“While in the past years, they start coming here in September, now their migration starts in November. They even invited new species to the Biec wetlands here,” she said.

Among these species, more than 200 barn swallows were seen in the area, based on the latest count of local environment personnel.

Esteban said they had yet to see two bird species that were normally spotted here. “Missing this year are the plover and the green shank. Last year, we recorded 20 plovers and 600 green shanks,” she said.

More egrets have found a new home at Barangay Nibaliw in San Fabian town, she said.

While there were 800 intermediate egrets and 120 great egrets spotted in Biec last year, the number dropped to only three and seven, respectively, this year.

“Perhaps this is because most of the fishponds were already back-filled that [the egrets] could hardly find food there,” Esteban said.

While migratory birds are a sight to behold, these dive for fish and prey on fingerlings, threatening the harvest of fishpond operators.

“Some fishpond operators put up nets to protect their cultured fish,” said Marlyn Banda of the Department of Environment and Natural Resources’ Protected Areas and Wildlife Bureau in Pangasinan.

But Esteban said the migratory birds preyed only on “weak fish” and pests in the fishponds.

For rice farmers, the migratory birds could be considered boon as these species eat snails, especially the golden ones that damage rice plants, Esteban said.

“While they come in droves, the migratory birds are not hunted down for their meat, because they have little flesh, which is not palatable,” Banda said.

She said residents around the wetlands avoided catching the migratory birds for fear that they could catch the bird flu virus.