LAOAG CITY, Philippines — Two of the powerful clans in the Ilocos Region vouched for Senate slate of Hugpong ng Pagbabago (HNP) for the May 2019 elections.

The HNP, Davao City Mayor Sara Duterte-Carpio’s regional party, started the second week of the campaign period by wooing the votes of the northerners in its back-to-back campaign sorties in the cities of Vigan and Laoag on Monday.

Singson called the HNP senatorial bets one-by-one, touting that he was able to gather local officials from 34 towns and two cities to show support for the 13-man lineup.

The lineup includes the sons of former President Joseph Estrada — Sen. JV Ejercito and former Sen. Jinggoy Estrada — although it was Chavit Singson who testified about corruption during their father’s presidency, leading to the latter’s ouster just after two years in Malacañang.

Singson, a former Ilocos Sur governor, asked some 10,000 supporters in Vigan City to vote straight for the HNP senatorial slate.

[Give the love that you will give us to our senatorial candidates.] 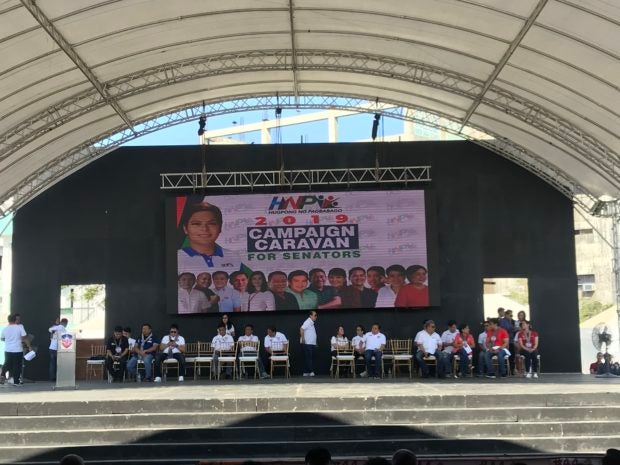 After the Vigan sortie, the HNP slate traveled to Ilocos Norte, the bailiwick of the Marcos clan.

Ilocos Norte Gov. Imee Marcos, who is also included in the HNP lineup, hosted the campaign rally at the Centennial Arena here.

The host political family pulled out all the stops in welcoming the party, providing a well-decorated stage and preparing grand productions showcasing Ilocano culture.

Also present during the Ilocos Norte leg was Imee’s son, Matthew Marcos Manotoc, who is running for governor.

In 2016, Sen. Grace Poe topped the presidential race in three of four provinces in the Ilocos Region: Ilocos Sur, La Union, and Pangasinan.

Meanwhile, Ilocos Norte gave the most number of votes to the eventual winner, President Rodrigo Duterte.

In his public speeches, the President has said that Marcos was instrumental in his bid for the country’s top executive post. /atm