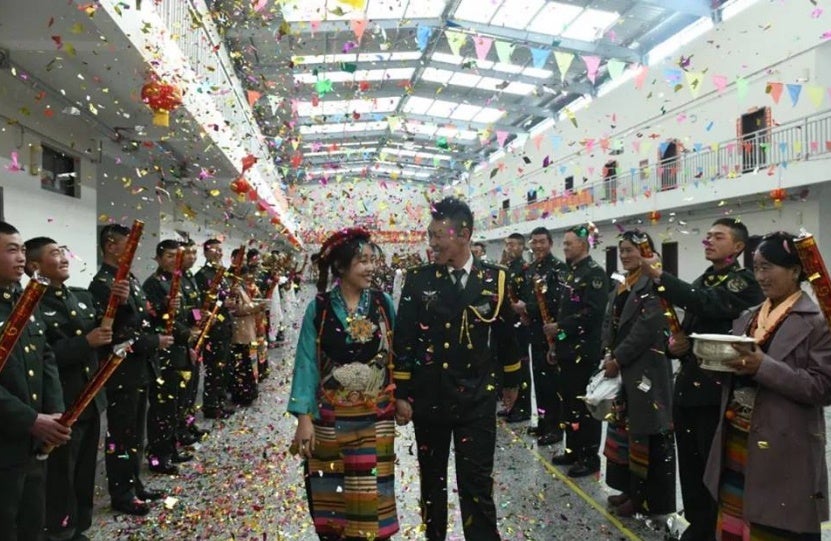 MANILA, Philippines – This Chinese couple did not allow a long distance relationship, work schedules and imposing, snowy mountains to get in the way of their wedding plans and  sealed their love and union with a special ceremony in the high altitude region of Tibet.

Yan Xiaoning has traveled far and wide to the camp of soldier Zhao Wei to marry him despite the cold weather and the thin air given the region’s high altitude.

Yan, who lives 4,000 kilometers away in the coastal city of Yantai in East China’s Shandong province, rarely sees Zhao in person as the latter is assigned to safeguard the border in Southwest China’s Tibet Autonomous Region, China’s People Daily reported on Monday, citing a report from Tibet Daily.

The report explained that Zhao’s unit is “responsible for the border security of hundreds of miles of border spanning across several snow-covered mountains—each with an altitude of over 5,000 meters.”

As the distance made their hearts grow fonder for each other, the two decided to get married in the Spring Festival.

But since Zhao would have to fulfill his duty during the said festival, Yan opted to bring the wedding to him instead.

Zhao’s camp, the report noted, traditionally celebrates the Spring Festival with the locals.

“When the locals learnt about the couple’s story, they decided to make this year’s celebration even more special by arranging a Tibetan-style wedding ceremony for them,” the report added.

During the ceremony, they were offered with “chemar,” which is “a specialty for the Tibetan New Year.”

They were also presented with a long, scarf-like white piece of silk used by Tibetans for blessings, known as  “hada.”

“They’re my children’s age, but they’ve sacrificed so much to safeguard our safety. For that, I’m most grateful,” a senior local, who helped with the couple’s wedding, was quoted in the report as saying.

The odds seemed to be in their favor as the local registration office, which does not operate during the said holiday, provided a special working hour to help the couple secure a marriage certificate.

Yan expressed hope that their “special certificate,” written in both Mandarin and Tibetan, will serve as the “best witness of their love.”  / gsg