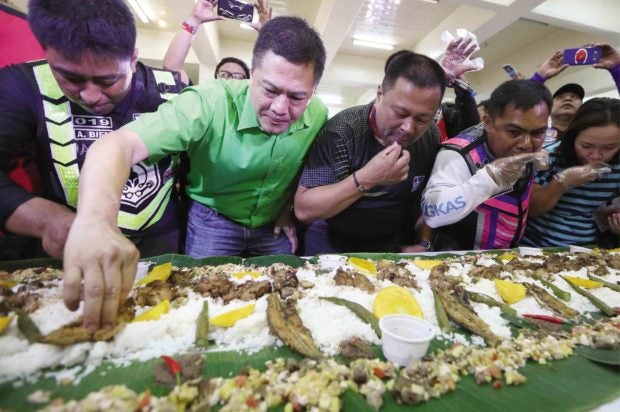 Several candidates signed a covenant on Sunday dubbed the “Rider’s Agenda” that included, among other demands, a vow to legalize motorcycle taxis — a thorny issue with a slim chance of being resolved by the current Congress despite widespread public support.

A set of reforms meant to give motorcycle riders an emphatic role in policy creation, the Rider’s Agenda was endorsed in a ceremony held at San Juan City by an eclectic mix of senatorial candidates — Chel Diokno, Florin Hilbay and Erin Tañada of the opposition, JV Ejercito of the Nationalist People’s Coalition and Leody de Guzman of Partido Lakas ng Masa.

Congressional bets Ruffy Biazon and Cristal Bagatsing, and the Partido Manggagawa party-list also signed the covenant that was crafted by Riders of the Philippines, an alliance of thousands of riders who attended Sunday’s assembly.

The covenant also signaled a decisive effort by motorcycle group leaders to organize their members into a cohesive community for politicians to court.

“Like pedestrians, we are one of the most vulnerable to road abuses,” said Toix Cerna of Move Metro Manila.

Aside from the promise to legalize and regulate motorcycle taxis, which the document recognizes as part of riders’ right to earn a living, the covenant also mandates the formation of a “Riders’ Consultative Assembly” that must be consulted before the passage of any bill concerning them.

Likewise included is a demand for legislators to support a “Motorcycle Road Safety Act” that will create national standards for governing motorcycle use, as well as a call to oppose any measure that will prevent riders from wearing safety gear like face masks.

Eric Lazarte of Philippine Advocates for Road Safety lamented that projects often prioritized car owners at their expense, such as road widening works that led to decreased space for those on motorcycles or bicycles.

The covenant and endorsements it netted on Sunday were a victory for the riders, who had been aggrieved by decades of policies that hampered their livelihood or profiled them as criminals, such as a ban imposed by some cities on pillion or tandem riding.

Their grievances reached a fever pitch in 2018 when the Supreme Court issued a temporary restraining order that halted the operations of popular motorcycle-hailing app Angkas.

But public support for the riders has run up against government gridlock, as Congress and the transportation department have placed the onus on the other to legalize motorcycles for public transport.

Hoping to put riders’ issues front and center during the campaign period, speakers at the assembly framed the covenant and the law it called for as answers to both worsening urban congestion and rampant road crashes, thus benefiting a broad swath of Filipinos.

“We are offering a solution to our government,” Cerna said.  “Especially with traffic now affecting not just the productivity of each person, but also the time they spend with their families.”