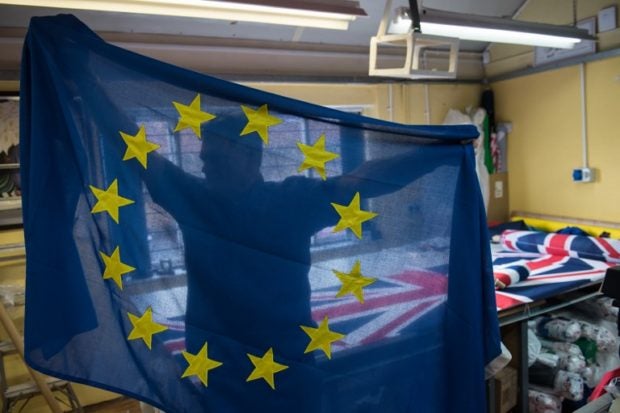 KNARESBOROUGH, UK — At a flag-making workshop in northern England, orders for Union Jacks are flying off the production line while the EU’s blue-and-yellow standard is proving less and less popular.

Flying Colors, which makes flags for Britain’s royal palaces, has seen EU flag orders drop by 90 percent since the country voted to leave the bloc in 2016.

Britain’s union flag is proving more popular than ever, with orders up roughly 75 percent since last summer.

“People are getting a little bit more passionate, I personally think, in being British,” said Ormrod, who voted for Brexit because he is “sick and tired” of Brussels.

“I have a feeling that we are wanting more of our identity within the UK,” the flag-maker added.

Britain has a long and complicated history with flags, according to Graham Bartram, chief vexillologist at the Flag Institute, a research centre in London.

Until the last decade, the country has been reticent about displaying even its own national flag, he said.

The union flag is currently only flown from government buildings on 21 days each year, including royal birthdays and anniversaries and saints’ days.

Bartram puts the trend down to various factors, including Britons wanting to downplay latent displays of patriotism and the country’s imperial past.

“We were standoffish about all flags,” he said, noting this extended to the European flag.

“It’s not a flag you would tend to see around Britain.”

In fact, prior to 2007, it was technically illegal to fly the EU and other national flags in Britain without planning permission, because they were considered advertising.

Following a change in the law, the bloc’s flag began to be seen more, flying outside the Scottish parliament, the Welsh and London assemblies and some other civic sites.

Hotels, organisations that have received significant funding from the bloc and EU member states’ embassies are also among those to fly the European flag.

A petition lodged with parliament in the aftermath of the 2016 referendum — signed by nearly 20,000 people — called for all EU “flags, emblems and logos” to be removed immediately from public buildings in Britain.

The government dismissed the calls, noting that “while the UK is a member of the EU it is in order for EU flags and symbols to be used in UK government buildings.”

All that could change once Britain has left the EU.

A spokesperson for the mayor of London said the emblem would be taken down from outside City Hall.

However, spokespeople for the Welsh Assembly and Scottish Parliament, said no decisions have been taken.

“We’ll take stock when the time is appropriate,” said the spokesman in Scotland, where voters overwhelmingly backed remaining in the bloc in the 2016 referendum.

The European flag was first created by the Council of Europe and only later adopted by the EU.

Bartram said its continued use by the Council, which Britain will remain a member of after Brexit, could provide cover for those who want to keep flying it after March 29.

Could it become a symbol of Brexit resistance? “Possibly,” he added. “And that would be interesting.”