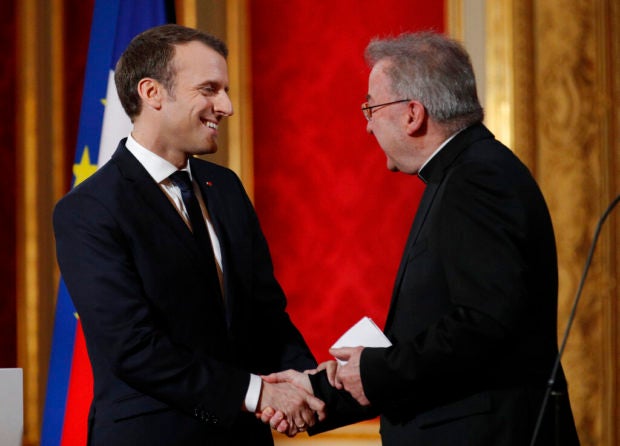 In this Jan.4, 2018 file photo, French President Emmanuel Macron greets Apostolic Nuncio to France Luigi Ventura during his New Year address to diplomats at the Elysee Palace in Paris. AP

PARIS  — The Paris prosecutor’s office has opened an investigation into alleged “sexual aggression” by Catholic archbishop Luigi Ventura, the Vatican’s envoy to France, according to French officials.

Confirming a report published by Le Monde newspaper on Friday, a judicial official and a spokesman at the Paris mayor’s office said the police investigation targeting the apostolic nuncio came after a young male city employee claimed he was sexually molested inside the French capital’s town hall.

Both officials spoke on condition of anonymity because they weren’t authorized to be named in media reports.

The Vatican said it found out about the investigation from media reports, adding that “the Holy See is awaiting the conclusions of the inquiry.”

Ventura, who has been holding the post within the Holy See’s global diplomatic corps since 2009, is suspected of having groped the buttocks of a young male employee at the Paris City Hall three times during a ceremony on Jan. 17.

Paris City Hall’s press office told The Associated Press that the victim is a man in his 30s working for the town hall’s international relations department. He was in charge of welcoming guests at the ceremony.

“He caressed and fondled his buttocks several times in front of witnesses,” a spokesman at the City Hall told The Associated Press. “Our employee was very surprised and did not know what to do.”

According to the spokesman, Ventura touched the employee three times over a period of about an hour before the young man left the ceremony after reporting the incidents to his superiors. The spokesman said Ventura didn’t apologize.

Ventura, who was born in northern Italy near the city of Brescia, turned 74 in December. He was ordained in June 1969 and elevated to bishop’s rank in March 1995. He was appointed nuncio to France in September 2009 by Pope Benedict XVI, a position regarded as the crowning achievement of a Vatican diplomatic career.

After serving as nuncio to Ivory Coast, Burkina Faso and Niger, he then held the position in Chile and Canada before landing the French post.

When he turns 75 in December 2019, he will be required, as all bishops are at that age under Vatican rules, to submit his resignation to Pope Francis, who can either accept it or let him stay on a little longer.

Ventura is the third Vatican diplomat accused of sexual wrongdoing. In June last year, the Vatican tribunal convicted Monsignor Carlo Capella of possession and distribution of child pornography and sentenced him to five years in prison. In 2013, the Vatican charged its then-ambassador to the Dominican Republic, Monsignor Jozef Wesolowski, with sexually abusing young boys. Wesolowski was defrocked by the Vatican’s church court, but he died before the Vatican’s criminal trial got underway. /ee