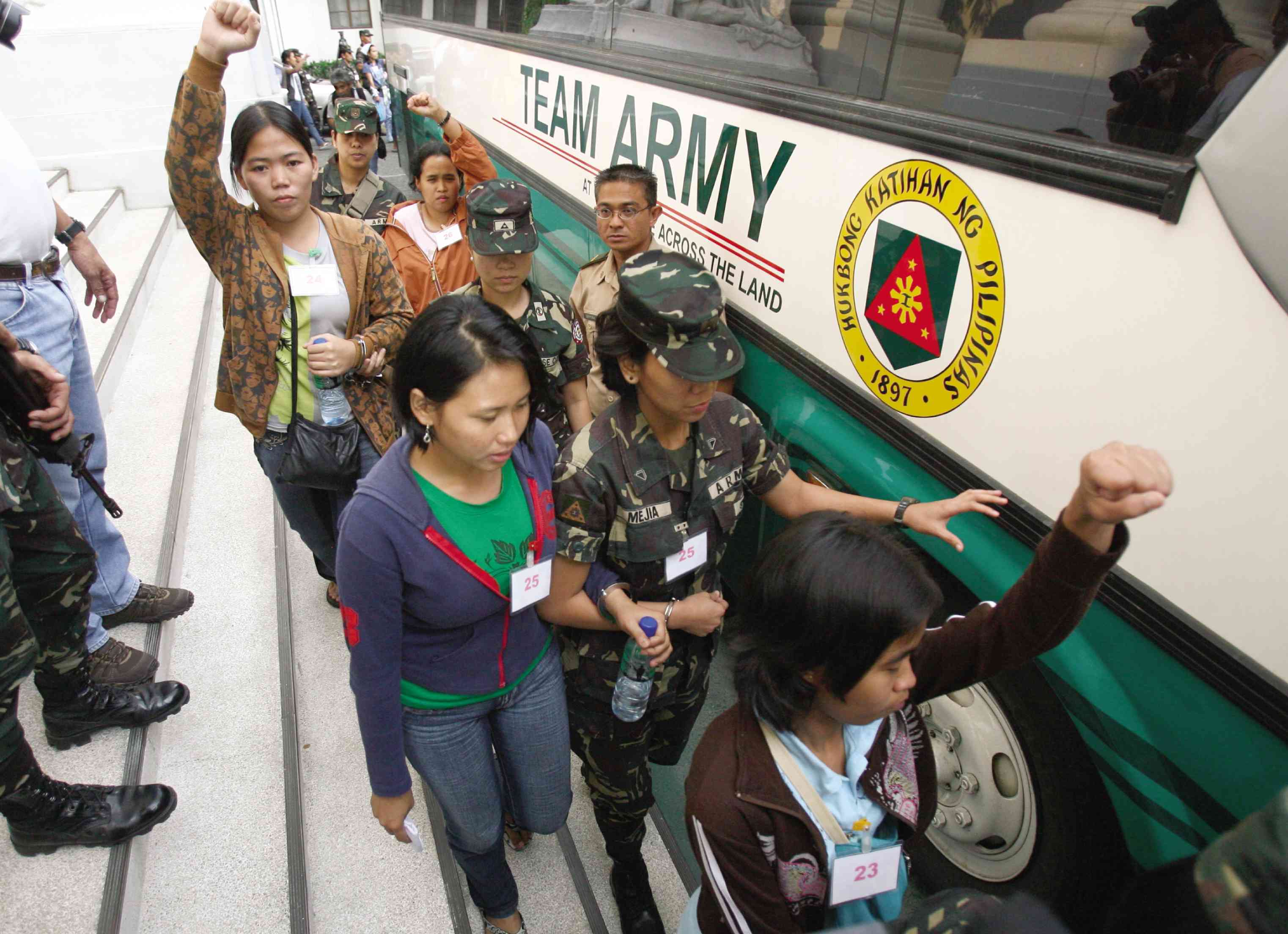 More than nine years after their ordeal, the group of doctors and health workers collectively known as “Morong 43” continue to demand accountability for their questionable arrest and detention from military and government officials, including former President  Gloria Macapagal-Arroyo.

In a court hearing on Wednesday, the health workers recounted before Judge Catherine Manodon of Quezon City Regional Trial Court (RTC) Branch 224 how they were frisked, blindfolded and handcuffed on Feb. 6, 2010, by soldiers from  the Philippine Army’s 2nd Infantry Division on suspicion that they were communist rebels.

The military had accused the group, which included 26 women, of having a training session on bomb-making at a resort in Morong, Rizal province.

The resort owner had belied the allegation and maintained that the health workers were attending a seminar organized by the private group Council for Health Development.

After the cases filed against them by the military—for illegal possession of firearms and explosives—were dismissed, the group was released on Dec. 17, 2010, according to Kat Verza, their media officer.

“[The Morong 43’s] eagerness to hold people accountable is still there. It does not waver,” said their lawyer,  Kathy Panguban of the National Union of Peoples’ Lawyers. “They can still recall the details of the atrocities they experienced during their detention,” she said.

Her clients were illegally detained and tortured at Camp Capinpin in Tanay, Rizal, were denied of their right to an attorney, and barred from seeing visitors for five days, Panguban said.

In April 2011, the Morong 43 filed a civil suit in the Quezon City RTC against Arroyo, Victor Ibrado, Delfin Bangit and former  Defense Secretary Norberto Gonzales for violating their human rights and detaining them for 10 months at Camp Capinpin and at Camp Bagong Diwa in Taguig City.

“The memory of how we were accosted, lined up, handcuffed and blindfolded for 36 hours straight while consistently being subjected to innumerable forms of torture and denied our right to counsel shall never be erased,” said Mercy Castro, one of the workers.

“Despite what we went through, we will never let this get in the way of our continuous pursuit of justice for ourselves  and all victims of human rights violations,” she added.

With Arroyo now Speaker of the House of Representatives, Castro said the Morong 43 and their supporters had reason to believe that a culture of impunity would flourish and lead to more human rights violations.

Shortly after the group’s arrest, the Supreme Court ordered the Armed Forces of the Philippines to present the health workers to the Court of Appeals, which was then hearing the Morong 43’s petition for a writ of habeas corpus. The military, however, failed to to comply, citing lack of time to coordinate security measures.

In December 2010, the detainees began a hunger strike to demand their freedom.

Before Christmas, the charges were dismissed on the instruction of then President Benigno Aquino III. Thirty-eight of the 43 detainees were released.

Five remain under military custody at Camp Capinpin. The government said they had admitted being members of the communist New People’s Army.

In September 2011, Judge Ma. Luisa Quijano-Padilla of the RTC Branch 226 ordered Arroyo and the 10 other respondents to answer the damage suit filed by the group against them.

In January 2012, Arroyo’s lawyers asked the court to dismiss the case, saying the complainants failed to state a cause of action.

The next hearing is set for March 20. —WITH A REPORT FROM INQUIRER RESEARCH