Papua New Guinea on hunt for 275 cars missing after APEC 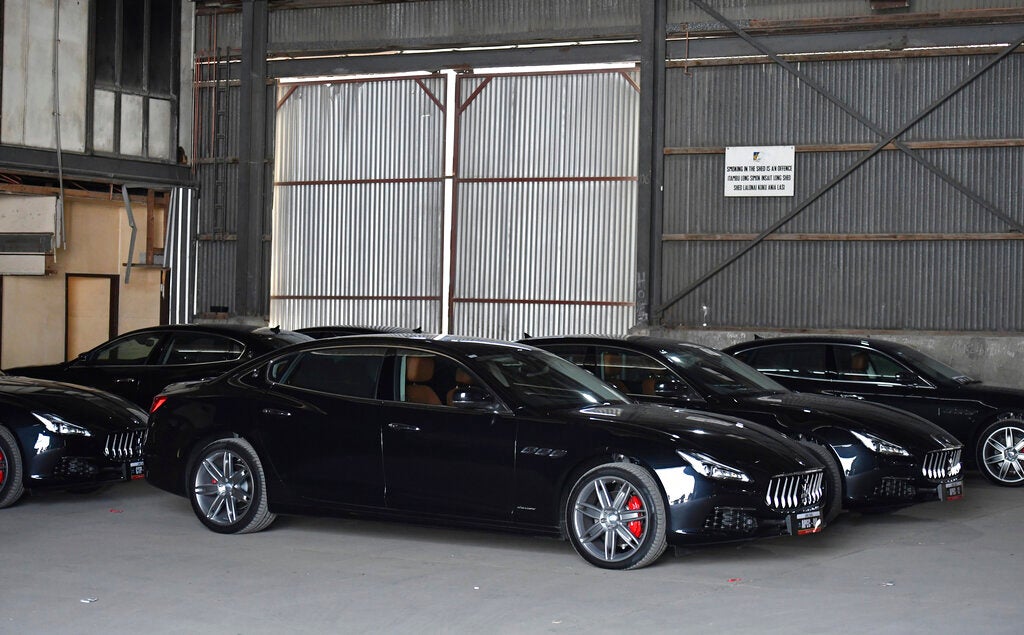 In this Nov. 17, 2018, photo, a selection of Maserati cars, part of the 2018 Asia-Pacific Economic Cooperation (APEC) forum transportation, are seen in Port Moresby, Papua New Guinea. About 270 cars are missing after the Nov. 2018 event or overdue. All 40 of the Maserati models have been accounted for. (Mick Tsikas/AAP via AP)

WELLINGTON, New Zealand — A Papua New Guinea police superintendent on Thursday was hot on the trail of one of the many high-end cars he’s trying to recover after an international summit.

About 275 cars are missing or overdue in the impoverished Pacific nation since it hosted the Asia-Pacific Economic Cooperation (APEC) summit in November. Many denounced the country at the time for buying 40 expensive Maseratis to ferry around world leaders, cars which it later planned to sell.

Although the Maseratis are accounted for, other cars are not.

When The Associated Press spoke to police superintendent Dennis Corcoran by phone, he said he was heading to pick up one of the missing cars, which somebody had tried to sell.

The thief had disappeared. “The driver absconded,” Corcoran said. “But we got the vehicle.”

Corcoran wasn’t eager to elaborate much on his operation due to the “delicate” sensitivities around his work, referring further comment to Finance Secretary Ken Ngangan, who couldn’t be immediately reached.

Since the summit finished, soldiers and police have blockaded government buildings and stormed Parliament in an ongoing pay dispute over APEC security work.

With so many pressing needs in the nation of 7 million people, many were dismayed at the amount of money spent on the summit, hosting leaders that included U.S. Vice President Mike Pence and Chinese President Xi Jinping.

Corcoran is heading a new unit in the police tasked with recovering all the state assets purchased for APEC in the three years leading up to the summit.

In a statement this week announcing the formation of the unit, Corcoran said he would address “the ongoing misuse and abuse of state assets that were bought using the people’s money.”

He said the goods had been purchased by government agencies and then “claimed by certain individuals through unlawful means.” He asked people to return the cars and other assets immediately and for the public to provide information to help the police.

Police also announced this week that they’d arrested one APEC officer who had used his position to enter the Port Moresby wharf to pry open the fuel caps of parked APEC cars and siphon gasoline from them.

Port Moresby, the capital, has been described by the World Bank as among the world’s most violent cities due to high unemployment and brazen criminal gangs known as “raskols.” Basic medicines are scarce in Papua New Guinea and polio, eliminated from most countries, has returned. /kga