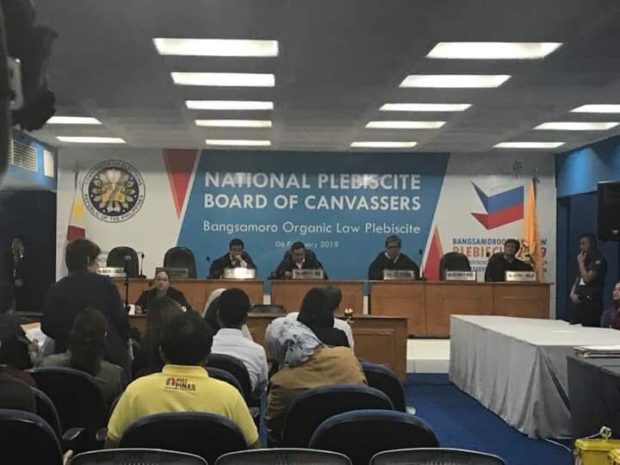 MANILA, Philippines — The Commission on Elections (Comelec) on Thursday officially announced the inclusion of 63 barangays (villages) in North Cotabato in the Bangsamoro Autonomous Region in Muslim Mindanao (BARMM).

“Let us be remind that the success of every electoral exercise depends on the active participation of the people regardless which side they will vote for,” Comelec Chairman Sheriff Abas said before the proclamation was made.

The Comelec, seating as the National Plebiscite Board of Canvassers, said that out of the 67 villages that participated in the second round of the Bangsamoro Organic Law (BOL) plebiscite, 63 have voted for inclusion in the BARMM.

Meanwhile six municipalities in Lanao del Norte which also participated in the second round of the plebiscite, will not be included in the BARMM after recording a higher number of rejection votes.

In a resolution of proclamation read by Commissioner Al Parreño, the Comelec proclaimed that “the municipalities of Baloi, Munai, Nunungan, Pantar, Tagoloan, and Tangkal, all of the province of Lanao del Norte, shall not form part of the Bangsamoro Autonomous Region in Muslim Mindanao.”

The second round of the BOL plebiscite was held last February 6.

During the second round of the plebiscite, residents in Lanao del Norte and North Cotabato where asked if they want their provinces included in the newly formed BARMM.

The BARMM will replace the Autonomous Region in Muslim Mindanao (ARMM). It will also have a broader autonomy, more power and resources, and a larger territory.

Following the end of the second round of plebiscite, the BARMM will now be composed of the following: the ARMM, Cotabato City, and the more than 60 villages in North Cotabato. This is in addition to the five provinces, three cities, and 116 towns that have already been previously included.