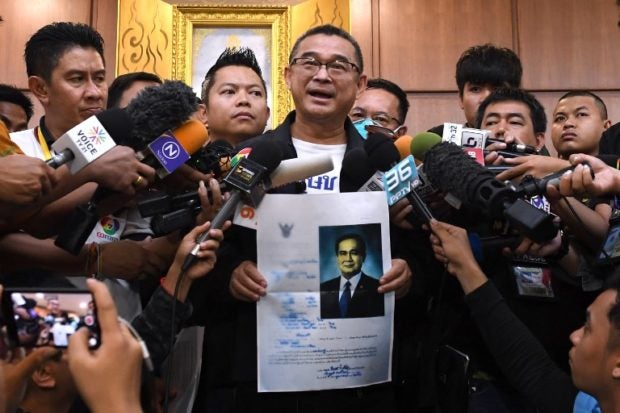 Ruengkrai Leekitwatana, an official of Pheu Thai party, holds an enlarged reproduction of the application of ruling junta leader Prayut Chan-O-Cha as candidate for prime minister by Phalang Pracharat, a pro-military party after submitting a petition to the election commission in Bangkok on February 11, 2019 to investigate Prayut’s qualification as candidate. AFP

BANGKOK, Thailand — After generals seized power in Thailand in a 2014 coup they turned to Beijing to kickstart growth and buff up their vision of an innovative, developed country steered by wise leaders and buoyed by China-backed infrastructure.

Thailand’s economy sagged in the first years after the power grab but the junta is staking its hopes for an economic turnaround on the Asian giant.

Yet concerns are mounting of an over-reliance on Beijing and the opacity of deals cemented by the generals.

Few can predict what will happen in a country known for coups and backroom political plots — uncertainty that was in focus last week after the king scuttled a bid by his sister for prime minister.

Junta chief Prayut Chan-O-Cha is looking to hold onto power and drive through the largest investment program in Thai history — with China’s help.

Tourism remains the kingdom’s banker — accounting for a fifth of the economy — and Chinese visitors are integral, making up a quarter of Thailand’s projected 41 million visitors this year.

Lavish Lunar New Year celebrations at the start of the month, including Chinese acrobats, arts, crafts and dragon dances, were expected to rake in over $300 million.

Wang Ziying was among those who took part, emerging from a mass of incense-wielding devotees at a Bangkok shrine — one of more than 11 million Chinese expected to visit Thailand this year.

“Travelling here is quite cheap,” said Wang, 27, with red bunting and lanterns festooning the streets around her.

Her husband was with her this time.

“Thailand is a country full of warm-hearted people,” she said.

Chinese investment in Bangkok condos is surging, while international schools are being filled by parents tiring of Shanghai and Beijing prices.

But junta critics say the rush for Chinese investment, carried out with virtually no public scrutiny, has left Thai markets vulnerable to price manipulation and economic shocks.

Thai rubber was hit hard by the trade war between the United States and China, while concerns abound over inducements likely to be offered to investors in special economic zones.

Approved investment deals from China in the first nine months of 2018 stood at 20 billion baht ($640 million), nearly double the amount recorded over the entire previous year, according to Thailand’s Board of Investment.

But the junta’s flagship project, the Eastern Economic Corridor, aims to dwarf that.

A mix of tech, airport and port upgrades, high-speed rail and manufacturing, the EEC is a $45 billion plan across three eastern seaboard provinces, and Thailand is courting investors from several countries.

“But without the kind of Chinese investment they are hoping to get, the Eastern Economic Corridor doesn’t get off the ground,” said Benjamin Zawacki, the author of “Thailand: Shifting Ground between the US and a Rising China”.

But junta opponents are on the lookout for any deals hustled through in the run-up to next month’s election before a new civilian administration takes power.

The generals have also spent large sums on Chinese military gear, unencumbered by oversight.
Junta number two Prawit Wongsuwan has served as the frontman, buying tanks, guns and three submarines — costing nearly $400 million each — that have yet to be delivered.

Once Southeast Asia’s most dynamic economy, Thailand has been beset by protests and political instability since an earlier coup in 2006, a period dubbed the “lost decade”.

Shortly after their last power grab, the generals imposed fresh layers of rote learning across schools, focusing on loyalty to the monarchy, discipline and national pride.

Yet junta leader Prayut has simultaneously touted a future of “Thailand 4.0” — a tech hub fed by highly-skilled, educated Thai workers.

To buttress the vision, a $320 million investment last year by e-commerce giant Alibaba was hailed by Prayut and Chinese entrepreneur Jack Ma as a sign of the bounty to come.

But critics say a woeful education system cannot feed into a pipeline of skilled workers without massive reform.

The race for Chinese cash has unsettled many Thais concerned by the warping of their markets by China’s massive economy.

A “pro-China stance” has been criticised by a wary Thai public, independent analyst Sasiwan Chingchit said, especially those affected by the government’s “poor performance”.

“A lot of people… are so sick of this government,” she said.  /ee
Agence France-Presse

Read Next
Maria Ressa to Guevarra: ‘I have the right to hold you accountable’
EDITORS' PICK
IATF to LGUs: Issue ordinances vs attacks on frontliners, COVID-19 patients
Quick chat with Nicole Andersson: ‘You really don’t need much to be happy’
Robredo spox thanks Duterte for defending VP’s efforts vs COVID-19
Diokno to Duterte: OK to make fun of buck tooth, but focus on people’s needs first
Nograles: Cabinet members to donate 75% of monthly salary to aid COVID-19 fight
10 Filipinos positive for COVID-19 in UK, 7 in Ireland — envoy
MOST READ
Coronavirus hotbed Rizal to shut borders on April 6
Sotto on Isko Moreno’s call: We do our job without the media following our every move
‘Money Heist,’ ‘Tales from the Loop,’ ‘Killing Eve,’ ‘Never Have I Ever,’ ‘After Life’: Five not-to-be missed series this April
Face coverings recommended, but Trump says he won’t wear one
Don't miss out on the latest news and information.

Face coverings recommended, but Trump says he won’t wear one