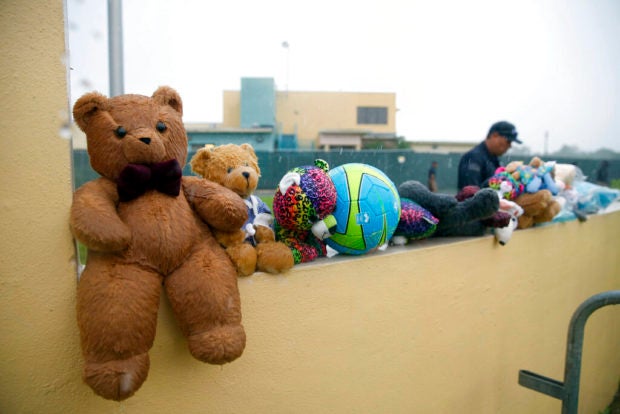 FILE – In this June 23, 2018, file photo, a guard walks by toys placed for migrant children by protesters as they march to Homestead Temporary Shelter for Unaccompanied Children, in Homestead, Florida. Journalists were given a glimpse Wednesday, Feb. 13, 2019, of a new expansion at the south-Florida detention facility where nearly 150 teenage migrants sleep in rows of bunk beds in a large windowless room and use portable toilets housed in adjacent tents. (AP Photo/Brynn Anderson, File)

HOMESTEAD, Florida—Journalists were given a glimpse Wednesday of a newly expanded south-Florida detention facility where nearly 150 teenage migrants sleep in rows of bunk beds in a large windowless room and use portable toilets housed in adjacent tents.

The sleeping area in a converted Job Corps building in Homestead, Florida, is just part of the growing detention center operated by a private company for the U.S. Department of Health and Human Services.

With a high, steel-framed ceiling and exposed ducts, the large room has an industrial feel, in contrast with smaller dorms where younger children sleep up to 12 per room that reporters saw on a similar tour of the facility last June. In the room where 17-year-old boys sleep, there are 144 bunk beds lined up in eight rows of nine. One of them had a red rosary hanging from the top bed frame.

Journalists were not permitted to interview the children Wednesday, and no cameras or recorders were allowed inside the tightly controlled compound surrounded by a chain-link fence. The children wore badges and walked in groups of 10 to 15 in single file, usually led by a uniformed employee who would frequently order them to stop so they didn’t come across other groups while trying to enter buildings. Some said “hello,” and a group of girls in pink sweatshirts offered a “good morning” in English and Spanish, but others avoided eye contact.

Comprehensive Health Services, which runs the facility, has hired 230 new employees and received 225 more children since December, when federal officials announced the expansion. Health and Human Services spokesman Mark Weber said none of the children were transferred from a controversial facility that shut down in January in Tornillo, Texas.

The Tornillo facility had opened in June in an isolated pocket of the Texas desert with capacity for 360 children. It expanded into a guarded detention camp that in mid-December held more than 2,700 largely Central American teens in rows of canvas tents. Politicians and advocates for immigrants and human rights protested at the site over the seven months it was open, with some even taking up vigils.

Since the Tornillo tent city closed, the Homestead center is the only temporary facility in use, Weber said. Lawmakers and immigrant rights advocates are fighting to shut this one down too, saying it does not comply with state child welfare laws.

Homestead is now one of the facilities with the largest number of migrant children in the U.S. Screens at the command center on Wednesday showed a population of 1,575 children, ages 13-17. Of the group, 670 are being housed in the new section.

The children in custody now are teenagers who arrived on their own, hoping to join relatives. Last summer, Homestead had taken in about 140 children who were separated from their families at the border.

New federal requirements mandating more stringent background checks on their families since last summer have slowed the children’s release to family members. The average length of stay at Homestead has gone up from 25 days last June to 67 days as of December.

The children eat three meals and also have three snacks, a program official told the media.

On Wednesday, a group of boys formed a line with trays in hand and got served white rice, red beans and fish.

Managers say there are attorneys at the facility every day and they meet privately with the children. There are four doctors and other physicians are on call.

A legal team visited the shelter last week to verify whether it complies with a 1997 agreement known as the Flores settlement, governing how migrant children are housed in custody. J.J Mulligan Sepulveda, an attorney at the Immigration Law Clinic at University of California, Davis, said they interviewed children and described a few instances in which they broke into tears describing the “military-style” conditions at the facility where they can’t hug one another.

Some feared that expressing emotion could get them referred to mental health services.

“A lot of them saw mental health services as a punishment, and thought it would affect their immigration case,” Mulligan Sepulveda said. The attorney also said he met a boy who was separated from his brother when the center began its expansion. He said they are only allowed to see each other once a week.

The Florida Department of Children and Families said in an emailed statement last month that because it is a federal facility the state agency “does not have any jurisdiction or involvement with children placed there.”

Comprehensive Health Services, which is part of Virginia-based Caliburn, isn’t able to use Florida records to screen the staff for child abuse and neglect because Florida law bans any outside employer from reviewing information in its child welfare system. Child abuse and neglect checks were waived because of these limitations, officials say. /jpv