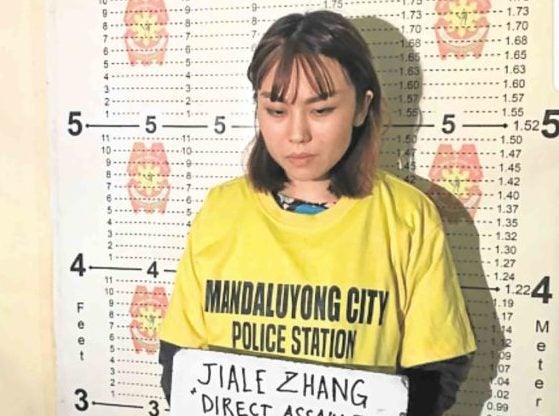 Just hours after being released on bail, the Chinese woman who threw “taho” (sweetened soya curd) on a policeman at a train station in Mandaluyong City on Saturday was arrested on Tuesday night, this time for processing for deportation.

Zhang Jiale, 23, was taken to  a Bureau of Immigration jail at Camp Bagong Diwa, Taguig City.

She will be held there until her processing for removal is completed or the Mandaluyong City Regional Trial Court resolves the direct assault and other charges brought against her by the Philippine National Police.

The PNP had brought charges of direct assault, disobedience to an agent of a person in authority and unjust vexation against Zhang after she threw taho on PO1 William Cristobal at the MRT Boni Avenue station on Saturday.

Cristobal stopped Zhang at a turnstile because she was carrying a cup of taho.

Liquids have been prohibited at train stations in Metro Manila as part of security measures after twin blasts at a Catholic church in Jolo, Sulu province, killed more than 20 people and injured nearly 100 others on Jan. 27.

Cristobal told Zhang to finish her taho first or throw it away before seeking access to the platform.

Instead of obeying, Zhang threw the taho on Cristobal then turned around to leave the station, but was stopped by security personnel.

Pictures of the encounter lit up the internet, generating public anger at the insolence shown by the Chinese student, who is staying in the Philippines on a special resident retiree’s visa.

The PNP arrested Zhang and clamped her in jail, while the immigration bureau, not waiting for a complaint to be brought, recommended her for deportation, as “the incident showed her disrespect toward persons of authority, which in turn shows her disrespect to the country.”

On Tuesday, Sandoval said Zhang could be deported for posing a risk to public safety, a violation of immigration laws.

Apart from being deported, Zhang will also be blacklisted, preventing her from returning to the Philippines.

“If found deportable, we will wait for the resolution of her court case before implementing the deportation,” she said.

When she will be deported depends on the length of her sentence if she is convicted, likely years rather than months.