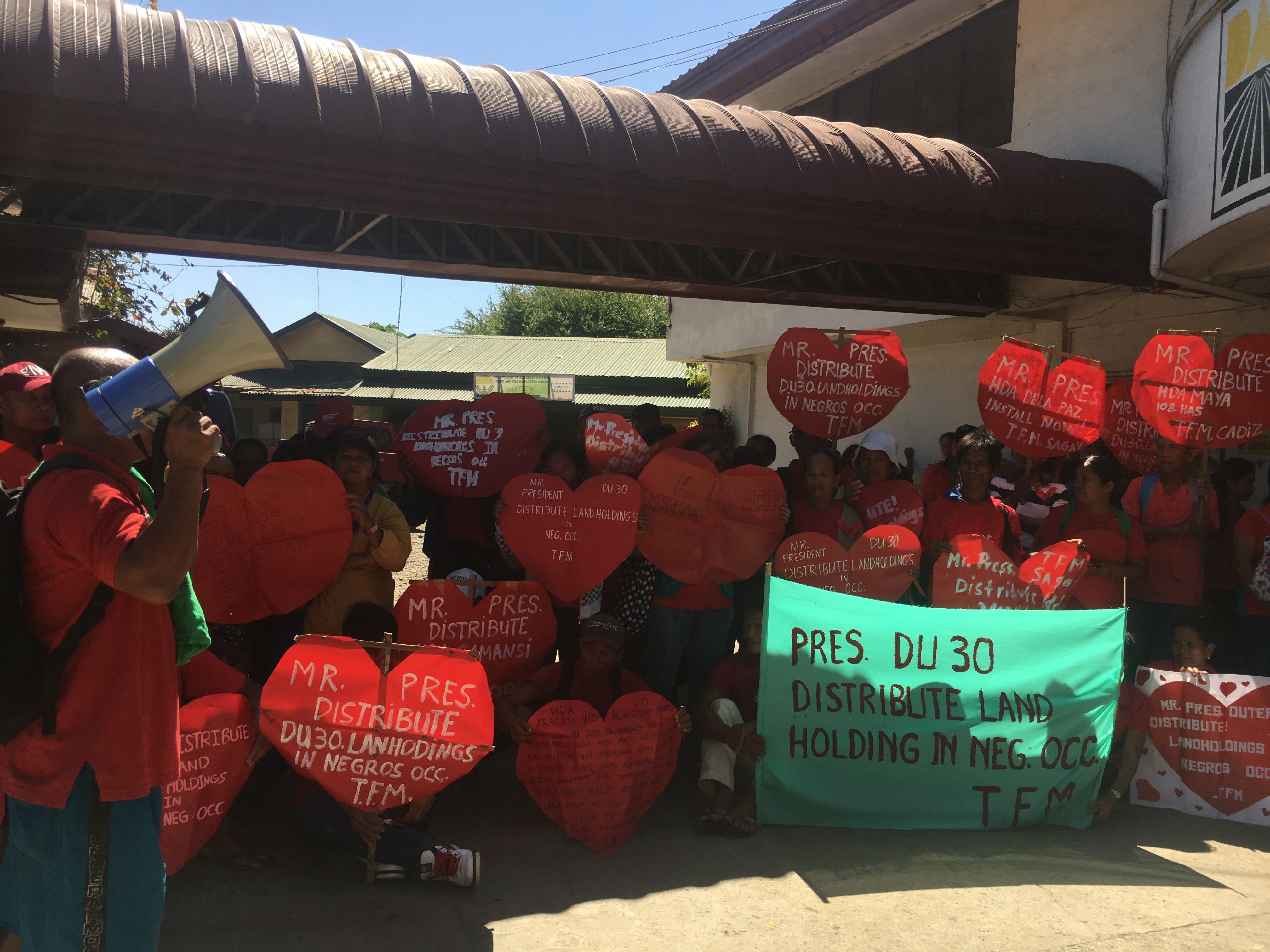 BACOLOD CITY – About 100 landless farmers carrying red hearts bearing their demands gathered in front of the Department of Agrarian Reform (DAR) provincial office in Bacolod City on Wednesday morning to call on President Duterte to order the distribution of land to beneficiaries.

Carrying heart-shaped placards on the eve of Valentine’s Day, farm workers converged at the DAR office in San Sebastian St., Dawis, where speakers aired their complaints about the non-movement of land distribution claims in the province.

“Listen to your heart, start completing the Comprehensive Agrarian Reform Program in Negros,” the protestors urged the president amid a sea of red hearts.

They urged the president to dismantle haciendas in Negros Occidental and distribute the land to them as well as plantation workers cultivating sugar cane for decades.

Negros Occidental has been a thorn on the side of previous administrations as hacienda owners continued to oppose land acquisitions and distribution by DAR, which is mandated to implement CARP, said TFM Negros Panay president Terry Tarlac.

“Listen to your heart of hearts. Get to the heart of the land reform problem, which is in Negros Occidental,” she said.

“You promised farmers last year that there will be a rebirth of agrarian reform in the country and your administration will be more aggressive in its implementation of the program. We are still pinning our hope on your promise. We also hope that you will start that ‘rebirth’ in Negros Occidental by ending the land monopoly and the rule of powerful hacienderos here,” she added.

TFM said the Duterte administration, through DAR, could complete the CARP in Negros Occidental by starting to distribute 30 landholdings in the province that are already in the pipeline.

The process to acquire and distribute these 30 landholdings, covering around 900 hectares, is almost complete and only await issuance of certificates of land ownership award (CLOA) to about 1,000 farmer-beneficiaries.

But these landholdings, the TFM said, remain stuck in the DAR or are pending at the Registry of Deeds (ROD) despite the absence of any bottlenecks to their distribution, the organization said.

“There is no more reason to slow down or impede CLOA issuance in these landholdings. But the landlords’ grip over these estates remain tight amid DAR’s lack of political will to award these to their tillers,” said Tarlac.

Among the biggest properties included in the 30 Negros Occidental landholdings that are already ripe for CLOA issuance but remained “parked” at the ROD are the following:

Section 9, paragraph 2 of Republic Act 9700 or the CARPER Law states that the ROD has this ‘ministerial duty’ to ripen the tillers’ right over a CARP-covered land by registering the CLOA and issuing the same to the farmer-beneficiaries.

“In fact, there is no more stumbling block such as landlords’ stiff resistance to the awarding of these 30 landholdings to farmers. The estates are already in the hands of the government. All it needs to do is to hand over the farms to their tillers through CLOAs. So why is this being stalled?” said Tarlac.

Data from DAR show that the Duterte administration, in its first two years in office, had the lowest CARP land distribution accomplishment since the Cory Aquino administration started CARP in 1986.

A total of 63,202 hectares of CARP-covered agricultural landholdings was distributed to farmers under the present administration from 2016 to 2017.

The highest land distribution accomplishment was recorded in the first two years of the Ramos administration. It was able to distribute to CARP beneficiaries a total of 679,341 hectares in 1992 and 1993.

The second highest accomplishment was during the first two years of the Estrada administration wherein a total of 269,427 hectares was distributed.