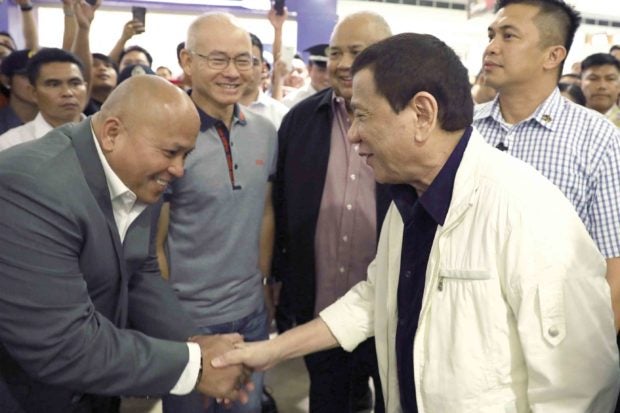 It’s more of a presidential slate than an administration ticket for the senatorial elections in May.

On the eve of the start of the campaign for national candidates, the Duterte administration still had no full slate for the 12 Senate seats up for grabs in the midterm elections.

President Rodrigo Duterte told reporters on Jan. 23 that he would have his own personal ticket because it was “the right thing to do.”

So far, the President has endorsed 11 senatorial aspirants — four of the five candidates of his Partido Demokratiko Pilipino-Lakas ng Bayan (PDP-Laban), which makes it the administration party, and seven others.

The President said he would support Villar, Cayetano, Angara and Marcos because they supported him in the 2016 presidential race.

He also said he would endorse Estrada whom he called a “friend,” and one of the 15 candidates of Hugpong ng Pagbabago (HNP), the political party of his daughter, Davao City Mayor Sara Duterte-Carpio.

On two occasions, the President said Aguilar was his candidate because he was a “nationalist” and had composed relevant songs.

On Monday night, the President called Mangudadatu a senator in a speech he delivered in Buluan, Maguindanao province.

The President called out Mangudadatu’s name while he was speaking about the possibility of Maguindanao finding oil in Liguasan Marsh.

“So if you become rich, do not forget us,” the President said.

Also in his speech, the President thanked Marcos for supporting his presidential bid in 2016.

Presidential spokesperson Salvador Panelo on Monday noted that the President had said he would campaign for his “preferred candidates.”

Asked whether the President’s endorsement of practically three slates would affect the chances of administration candidates, Panelo said: “Well, you know in the ultimate analysis, it will be the electorate who will decide.”

The three slates consisted of those from PDP-Laban, his supposed senatorial slate and HNP.

Panelo said the President had come up with his own senatorial slate although he was chair of PDP-Laban because it was his personal preference. “So, I don’t think we can stop him.”

He added that the President was presenting certain candidates that he thought would be good material for the Senate.

If the President is supporting three slates it means he has a deep bench of senatorial hopefuls, according to Panelo.

He said not all candidates on the slate that previous Presidents had endorsed had won. “There is always somebody outside of the slate that gets the approbation of the people.”

Panelo defended the inclusion of Marcos and Estrada among the preferred candidates of the President when asked about Mr. Duterte’s strong stand against corruption.

Marcos is a daughter of the late dictator Ferdinand Marcos, who had been accused of amassing ill-gotten wealth of up to $5 billion during his 20-year rule.

Estrada is facing plunder charges in the Sandiganbayan, but is out on bail.

Panelo said the President was helping Marcos because he was “indebted to her because she is one of only two governors who helped him in the [2016 presidential] campaign. His reason was because he owed her a debt of gratitude.”

Panelo noted that Imee Marcos had not yet been charged of any crime.

In the case of Estrada, Panelo said the son of former President Joseph Estrada had not yet been convicted of plunder.

Estrada is accused of plunder and 11 counts of graft for allegedly pocketing P183.79 million from his Priority Development Assistance Fund (PDAF) allocation from 2004 to 2010 in the scheme allegedly masterminded by businesswoman Janet Lim-Napoles in collusion with lawmakers.

“And the Constitution says, unless you are convicted by final judgment, you are presumed to be innocent. So the presumption is Estrada is innocent,” he said.

Panelo also said Estrada was given provisional liberty from the plunder case, showing that “the evidence of guilt is not strong.” —With a report from Inquirer Research