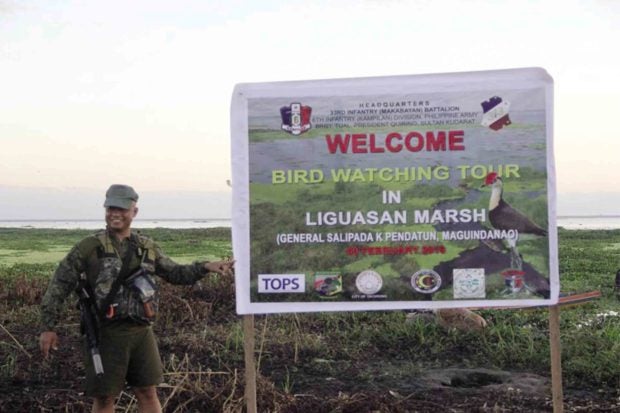 LIBERATED BIRD PARADISE Bird watchers, accompanied by soldiers and policemen, ride on motorized boats for a tour of the former rebel stronghold at Liguasan Marsh in the South. —PHOTO FROM 33RD IB

GEN. SK PENDATUN, Maguindanao — Soldiers, former Moro rebels and bird enthusiasts went to a former lair of terrorists in Maguindanao province not to attack bandits but to watch birds.

The camera-wielding bird watchers, headed by Emily Jamorabon of the Tacurong City tourism office, were backed by soldiers and policemen as they stalked their targets on motorized boats operated by former members of the Bangsamoro Islamic Freedom Fighters (BIFF).

The ex-BIFF rebels surrendered to the government early this year.

The group was part of the first bird watching tour at Liguasan Marsh, which was jointly organized by the 33rd Infantry Battalion (IB) and the municipal government of General Salipada K. Pendatun, Maguindanao.

The 220,000-hectare Liguasan Marsh has great potential for eco-tourism because of the presence of rare species of water birds.

“Some of the birds like the comb-crested Jacana can only be found here,’’ Jamorabon said. “Foreign tourists would be very interested to see them here.”

Jamorabon was among 15 civilians, accompanied by soldiers and policemen, who dared to see the birds at their feeding grounds in the newly “liberated” southern area of Liguasan Marsh.

Seeing the potential of the area where the BIFF used to operate, Cabunoc hatched a peace program that lured Moro rebels to embrace peace. That program led to the surrender of about 40 BIFF members.

Cabunoc said he wanted to support the government in providing sustainable livelihood for rebels who surrendered in the past two years.

“Let us support the peace by boosting the tourism industry in Maguindanao,” he said in a statement.