More parents having their kids vaccinated for measles – Duque 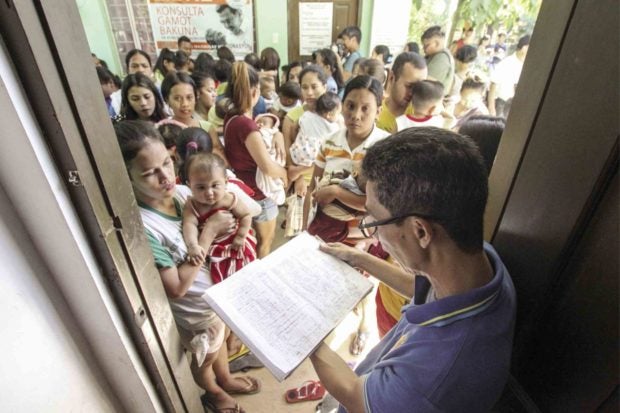 IMPROVED AWARENESS Parents wait for the names of their children to be called for inoculation at Corazon Aquino Health Center in Tondo, Manila. —EARVIN PERIAS

While the measles outbreak has yet to be controlled, the Department of Health (DOH) is slowly regaining the trust of parents who are having their children vaccinated for the preventable disease.

Health Secretary Francisco Duque III said this on Monday as he made his rounds in Metro Manila and noticed that the number of children being inoculated with the measles vaccine had increased “quite substantially,” especially after the DOH declared an outbreak last week.

At Baseco Compound in Tondo, for instance, Duque said at least 500 children were vaccinated, a far cry from the previous weeks when there was virtually no one queuing at barangay health centers.

“I am glad that now the parents seemed to have changed their views on the immunization program of the DOH. It helps ease our worry and, hopefully, they would continue to trust our vaccination [activities],” Duque told reporters.

But the parents’ apparent change of heart came too late for some, like Maricel Lumanog, whose 4-year-old daughter Analisa has been confined at Rizal Medical Center in Pasig since last week.

Lumanog said she was unable to have her daughter inoculated because she did not have the time to bring her child to a health center.

The DOH has assured the public that there is enough supply of the vaccine, although more health workers needed to administer the drug.

“We are requesting for more personnel. In Calabarzon (Cavite, Laguna, Batangas, Rizal and Quezon), we need around 300 more,” Dr. Eduardo Janairo, regional health chief, said, referring to nurses and doctors.

In Calabarzon, the DOH said it needed to vaccinate 1.6 million children, adding that those between 6 months and 6 years old were the most vulnerable to the contagious disease.

The DOH has vaccinated about 15,000 children in Antipolo City, Rizal, and about 8,000 in Laguna province since last year.

The number of vaccinated children in Quezon, Batangas and Cavite provinces is still being verified, Janairo said.

Based on a study conducted by the World Health Organization in October last year, the lack of time among households was the second biggest reason why children in some areas in Metro Manila were not immunized.

The top cause was the parents’ fear of vaccines due to the controversy that surrounded the government’s dengue immunization program.

To deal with the problem, Duque said he had instructed DOH regional directors to coordinate with local chief executives on the extension of health center operations to 6 p.m., as well as to cater to residents even on weekends.

In the National Capital Region, talks are also being held with church groups and shopping mall owners for off-site vaccination areas, he said.