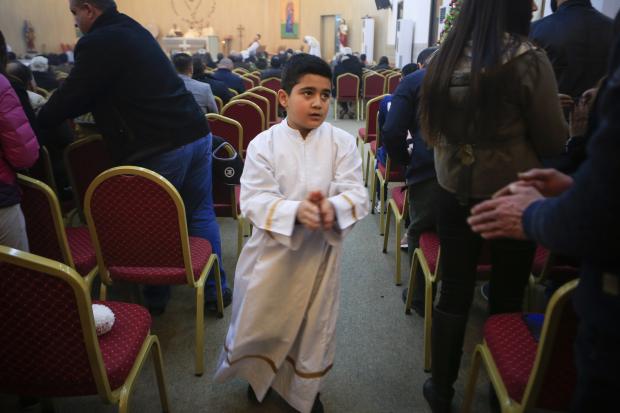 In this Jan. 20, 2019 photo, an altar boy shakes people’s hands during Sunday service at Mart Shmony Orthodox Church in Irbil, Iraq. Two years after it was liberated from Islamic State militants, only a fraction of Bartella’s Christian residents have returned. Most now live in Ankawa, the Christian neighborhood of Kurdish Irbil. (Photo by FAY ABUELGASIM / AP)

BARTELLA, Iraq — In the main square in the northern Iraqi town of Bartella stands a large cross, one of the few overt signs the town was historically Christian.

Nearby, a massive billboard shows Shiite Muslim martyrs alongside a photo of Iran’s Ayatollah Khomeini. Posters of Iranian-backed Shiite militiamen killed in fighting with the Islamic State group hang on streets all around the city, along with banners to revered historical Shiite saints.

Thirty years ago, Bartella’s population was entirely Christian. Demographic changes over the decades left the town split between Christians and an ethnic group known as Shabak, who are largely Shiites. When the Islamic State group overran the town and the rest of northern Iraq in 2014, Bartella’s entire population fled — since both communities were persecuted by the radicals.

But two years after Bartella was liberated from IS, fewer than a third of its 3,800 Christian families have come back. Most remain afraid, amid reports of intimidation and harassment by Shabak, who dominate the Shiite militias now controlling the town.

Catholic priest Behnam Benoka claimed that the Christian community is being pushed out by the Shabak. He also said multiple cases of sexual harassment have been reported to him and even one robbery of a little girl whose gold earrings were stolen. At one point, Shabak men fired guns in the air front of the town’s church for over an hour.

Iqbal Shino, who moved back to Bartella with her family in November 2017, said a Shabak man grabbed her from behind in a market. She screamed and the man was caught by onlookers. She filed a complaint with the police but later dropped it to avoid problems.

“I feel like because I was a Christian, he assaulted me so that they can scare us to leave Bartella,” she said.

The town’s divisions point to the broader tensions around northern Iraq in the wake of the dispersal caused by the Islamic State group. Now that IS is gone, sectarian divisions are bubbling up to the surface, and multiple political and armed groups are vying for power and influence, said Renad Mansour is a research associate at Chatham House, a think tank.

“That’s the main priority now: Who can carve out the most influence in the area and naturally that creates a precarious security environment,” he said.

Qusay Abbas, the Shabak representative in parliament in Baghdad, said incidents of harassment against Christians are just individual acts that don’t represent the community of Shabak or the militias, which are part of the government-sponsored Population Mobilization Forces.

“The security apparatus has a lot of factions so it’s inevitable that some mistakes would happen. There are some violations, and a lot of things, sometimes stealing, misusing their position to get money, we know that,” said Abbas, who is based between Bartella and the capital. “But that doesn’t mean that everyone is bad.”

He said the Shabak suffered just as much as the Christians from IS.

“They both suffered collectively, so I say to the Christians brothers, please don’t rely on some rumors and sectarian speeches,” he said. “We can solve these problems we just need to sit down together.”

The Christian community in Iraq has plummeted in the last 15 years because of attacks by Islamic militant groups, including al-Qaida and IS. An estimated one million Christians were living in Iraq before the U.S.-led invasion of 2003; today only a fraction remains. The Islamic State group takeover the north only worsened the disaster for the Christians, sending them fleeing for safety in the autonomous Kurdish region, where most remain.

Bartella’s demographic changes began around 30 years ago when Iraqi leader Saddam Hussein nationalized farmland that used to belong to Christians and gave it to families of soldiers killed in the Iran-Iraq war. This brought an influx of Shabak. After Saddam was toppled in 2003, another batch of Bartella land was given to families of Shabak Shiite martyrs.

Most of Bartella’s Shabak population has returned, bringing life back to their neighborhoods. In contrast, the town’s Christian districts are largely deserted. In one, called, Hay al-Muallimeen, many of the houses were destroyed in the fighting, and only around one in four has anyone living in it.

Security is now run by the Popular Mobilization Forces, known by the Arabic name “Hashed.” Its fighters, who in Bartella are mostly Shabak, run checkpoints in the streets and act as police.

One of the biggest points of contention in Bartella is the removal of the Ninewa Protection Unit, a semi-autonomous police force made up mainly of Christians that guarded the town until the IS takeover. Its fighters have fled to Kurdish areas and have not returned. That is one reason Christian families have been wary of returning.

“The Christian is the weakest link the Iraqi society,” said Ammar Shamoun Moussa the head of the NPU. “When there is stability and there is a law in the land, I think a lot of families would come back.”

Bartella city council member Jalal Boutros said the NPU is “part of our identity and protect it and validates our presence.” He pointed to worries that some Shiite militiamen in Hashed are just as extremist as Sunni militants in IS, which is widely known by its Arabic acronym, Daesh.

“Even if the Daesh weapons have gone, the thinking is still there,” he said.

The trust between the communities is gone.

Salim Harihosan, a Christian, returned to Bartella in 2017, and like many families found his house destroyed. An NGO helped him rebuild.

But he regrets his decision to come back and said he is haunted by fears over lawlessness, sectarian splits, and potential violence. He said he wakes up five times a night to check if his car is safe and is looking to rent an apartment in the Kurdish-zone city of Erbil, just in case.

“It is a psychological situation … I go to the market and I hear things, that maybe this or that happened,” he said. “These things play with the mind of the person living here.”

In the church in the neighborhood of Ankawa, in Erbil, hundreds of Christians, many from Bartella prayed and sang hymns on a recent day.

One of them, 72-year-old Habiba Kiyaqos, lived in Bartella all her life but doesn’t see herself ever returning. Her house is wrecked, her possessions are gone, and she’s afraid of becoming the victim of religious extremists — whether Sunni militants like IS or Shiite militiamen.

“I really want to go to sleep in Bartella, but I am scared they will come and attack us.” /atm