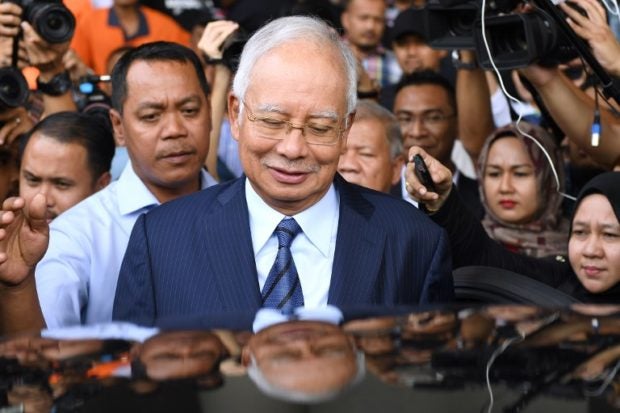 Former Malaysia’s prime minister Najib Razak leaves the courthouse in Kuala Lumpur on December 12, 2018 after being charged in court. AFP

KUALA LUMPUR, Malaysia — Malaysia’s former prime minister Najib Razak was making a last-ditch bid Monday to delay the start of his trial over the 1MDB scandal, which contributed to his government’s shock election defeat.

Najib is due to go on trial Tuesday for the first time over allegations that he was involved in the looting of Malaysian sovereign wealth fund 1MDB in a fraud that stretched around the world.

Billions of dollars were allegedly stolen by Najib and his cronies from the fund, which was set up to help develop Malaysia’s economy, and spent on everything from high-end real estate to expensive artworks.

The scandal was a major factor in his long-ruling coalition’s loss at polls in May. Since losing power, Najib has been arrested repeatedly and hit with a total of 42 charges linked to 1MDB. He has denied wrongdoing.

The trial due to begin Tuesday is on seven charges related to allegations Najib pocketed 42 million ringgit ($10.3 million) from SRC International, a former unit of 1MDB.

But his lawyers have filed an application for the trial to be delayed pending an appeal on a technicality related to the transfer of charges between different courts. The Court of Appeal is due to rule on the application later Monday.

It is just one of several trials Najib is expected to face over 1MDB and involves a fraction of the total purportedly stolen from the fund.
But the start of the first trial will be a key moment, and may relieve pressure on the new government following criticism that it has been slow to act over 1MDB.

Far from keeping quiet, Najib has gone on a bizarre publicity blitz in recent weeks, performing a cover of a 1970s R&B hit accompanied by backing singers, attacking the new government on social media and seeking to present himself as a man of the people. /ee

Read Next
Panelo: Anyone can go to Supreme Court and question national budget
EDITORS' PICK
Smart 5G goes live
Water remains our saving grace right now
PNP: Checkpoints back in MECQ areas
Been there, done that but what’s the difference between MECQ and GCQ?
BREAKING: 3,226 latest COVID-19 cases bring PH’s total to 106,330
A gem of a residence in the new normal
MOST READ
MECQ guidelines in infographics
Doctors group to Duterte: ‘There was never a call for a revolt’
MECQ in NCR, other areas: Mass transportation suspended, quarantine pass required anew
Duterte heeds frontliners’ plea, reimposes MECQ in Metro Manila, other areas Aug. 4 -18
Don't miss out on the latest news and information.