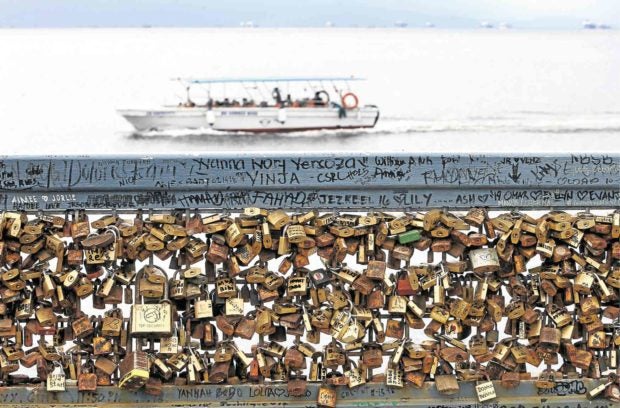 LOVELOCKS BY THE BAY Lovelocks—padlocks bearing the names of couples wishing for a happy ever after—take up every available space on a metal barrier beside Manila Bay in Pasay City. MARIANNE BERMUDEZ

A total of 17 more establishments in the cities of Manila and Pasay, including the Philippine International Convention Center (PICC) and several hotels, have been cited by the Laguna Lake Development Authority (LLDA) for polluting Manila Bay.

On Friday, cease-and-desist orders were issued against Makchang Korean Restaurant, the Networld Hotel, and Legend Seafood Restaurant for discharging pollutive wastewater into the bay waters.

The three establishments joined eight others that were slapped earlier with similar orders. As a result, their water sources and wastewater-discharging facilities were shut down by LLDA personnel until they could show proof of compliance with the law.

On the other hand, notices of violation for water pollution cases were served to the PICC, Harbour View Square (Block 1 & 2), China Oceanis Inc. Philippines-Manila Ocean Park, Breeze Residences, and the Sofitel Philippine Plaza.

Also cited for the same offense were the Sogo Hotel on Roxas Boulevard, Harrison Mansion, Midas Hotel and Casino, and Carwash by Benjas.

The LLDA gave the five establishments 15 days to submit an explanation.

Under the continuing rehabilitation of Manila Bay, the Department of Environment and Natural Resources said that as of Feb. 5, it had issued cease-and-desist orders to 21 establishments in Central Luzon.

It also issued notices of violation to 265 establishments in Metro Manila and 45 others in Calabarzon.

As of last week, the LLDA, which has jurisdiction over several cities in Metro Manila, had inspected 341 commercial establishments and 58 hotels for possible environmental violations.

Government officials had said that the cleanup of the 194,400-hectare bay would not only involve cities in Metro Manila, but also eight provinces in three regions that have rivers and estuaries which flow into the bay.

On Monday, Interior and Local Government Secretary Eduardo Año will meet with 178 top government officials to ensure their commitment to the bay’s rehabilitation.

In a statement, Año said the town and city mayors from Central Luzon, Calabarzon and Metro Manila would attend a forum on the program for the bay’s cleanup and preservation at the New World Manila Bay Hotel in Manila.

Año said he would also remind the officials of their roles and responsibilities in the bay’s rehabilitation as ordered by the Supreme Court in 2008. —With a report from Jeannette I. Andrade

Read Next
Man asks for help for ailing wife
LATEST STORIES
After winning title, time for LA Tenorio to give back to Batangas folk
‘Mia’: Rom-com with a cause a career-boosting showcase for Coleen Garcia
No.13 lucky for Orlando Bloom
The ties that bind: Why the guys of Black Eyed Peas prefer to stay together
How Yam handles flirtatious guys
MOST READ
Nadine Lustre’s phone stolen in Brazil
Gretchen Barretto’s daughter Dominique graduates magna cum laude from California college
Phivolcs: Slim probability of Taal Volcano caldera eruption
Ginebra beats Meralco again to capture PBA Governors’ Cup title
Don't miss out on the latest news and information.