Thousands of Chinese pray to the God of Wealth 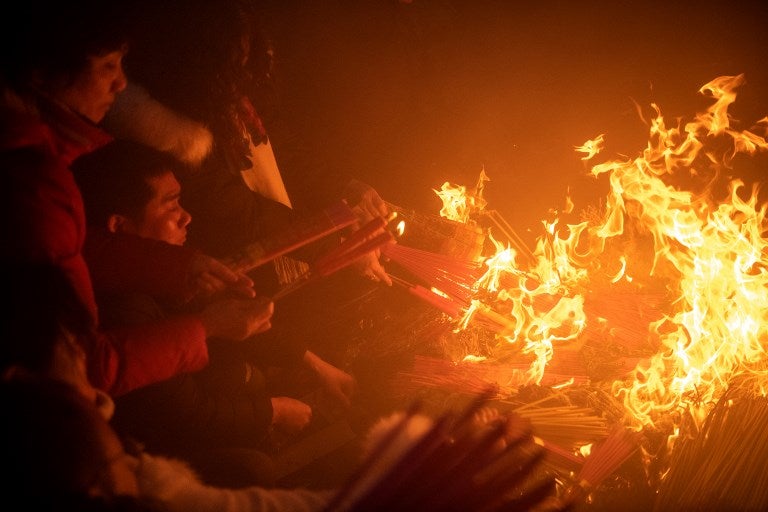 Chinese worshippers offer prayers and burn incense on the fifth day of the Lunar New Year at the Guiyuan Buddhist Temple in Wuhan, central China’s Hubei province, on February 9, 2019, as China marks the Year of the Pig with a week-long Spring Festival holiday, the most important festival of the year. AFP

WUHAN, China – Thousands of Chinese worshippers crowded into a temple in the middle of the country on Saturday to pay homage to the God of Wealth and pray for good fortune.

Devotees flock to the Guiyuan Temple in Wuhan in central China on the 5th day of every Lunar New Year, to mark the birthday of the god Caishen.

Braving the pre-dawn cold, young and old brought handfuls of incense sticks to burn in the courtyard of the vast Buddhist temple.

Worshippers burn incense and other offerings on a scale much larger than at any other festival in China.

Flames flicker in the darkness, with the burning producing so much ash that employees of the temple need to regularly take it away by the shovel-load.

In recent years, the event has attracted more than 100,000 people to the temple each day, according to state media.

“Chinese tradition says that it is the birthday of Caishen, so I am here to celebrate,” Gong Xinwen, a young woman who has been coming to the temple with her parents since she was young, told AFP.

This year, she has a special request for Caishen — that she may have a child during the year of the Pig, that will carry the animal’s zodiac sign, which is associated with good fortune.

“The pig is a blessing,” she explains.

The Chinese zodiac has 12 signs, one for each year.

In the middle of the temple stands a giant statue of Guanyin, the goddess of mercy, who is often approached by those seeking to have a child.

On Monday night and into Tuesday, the Chinese celebrated the Lunar New Year, which falls on a different date each year, although always in January or February.

The most important holiday of the Chinese calendar, the New Year is marked with a fortnight of festivities as reunited families wrap dumplings together and exchange gifts and red envelopes stuffed with money.

In a country with almost 200 million internal migrants, the return home by workers during the festival season is the world’s largest annual migration. /cbb