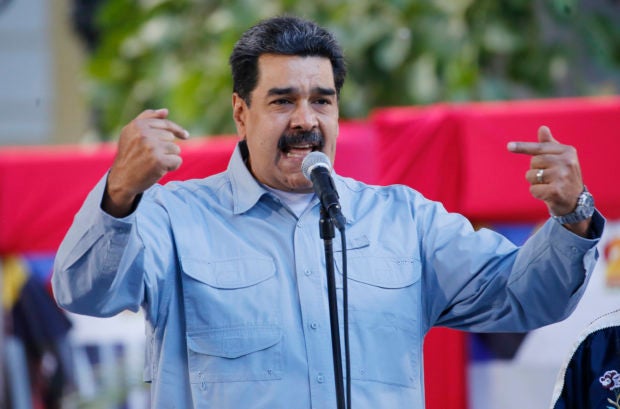 Venezuela’s President Nicolas Maduro speaks during an event at Bolivar Square in Caracas, Venezuela, Thursday, Feb. 7, 2019. Maduro said that he hopes to collect 10 million signatures demanding that Washington withdraw threats of war against the people of Venezuela. (AP Photo/Ariana Cubillos)

PUNTO FIJO, Venezuela  — Nieves Ribullen, a Venezuelan oil worker sick of struggling to get by as his country falls apart, is betting it all on Iraq’s far-away Kurdish region to give his family a better life.

Over the years he’s watched dozens of co-workers abandon poverty wages and dangerous working conditions at the rundown complex of refineries in Punto Fijo on Venezuela’s Caribbean coast for jobs in far-flung places like Kuwait, Angola and Chile.

Now it’s his turn. Leaving his wife and three children behind, he’ll soon ship out to Iraq’s semi-autonomous northern Kurdish region, where he expects to earn more than $3,500 a month — a fortune compared to the less than $20 he brings home monthly in increasingly unstable Venezuela.

“I only earn enough to buy a kilo (2 pounds) of meat and one chicken each month,” Ribullen said. “We’re in chaos.”

But the accelerating exodus of oil workers means that Venezuela’s crude production — already at a seven-decade low — is unlikely to rebound anytime soon, even if recently-imposed U.S. sanctions are lifted and a business-friendly government replaces the increasingly wobbly President Nicolas Maduro.

Venezuela was once one of the world’s top five oil exporters, pumping 3.5 million barrels a day in 1998 when President Hugo Chavez was elected and launched Venezuela’s Bolivarian revolution. Today, the state-run oil company PDVSA produces less than a third of that. Critics blame corruption and years of mismanagement by the socialist government.

Even worse, production is about to sink even further due to fresh sanctions by the Trump administration targeting PDVSA and its Houston-based subsidiary Citgo with the aim of depriving Maduro of more than $11 billion in exports this year.

Despite the short-term pain they will bring Venezuela, Guaido said the sanctions are a critical part of stopping Maduro from consolidating power in what he calls a “dictatorship.”

Venezuela’s oil workers began flooding out in 2003, shortly after Chavez fired thousands of them — many by name on national television — for launching a strike that paralyzed output. The oil workers accused Chavez of riding roughshod over the nation’s democratic institutions, while Chavez said the picketers were plotting a coup.

Tomas Paez, a professor at Central University of Venezuela who studies the Venezuelan exile community, estimates that 30,000 oil workers fled in the initial wave, many banned from working in the country’s oil industry.

He said it’s difficult to gauge how many more have left as Venezuela’s economic problems have worsened under Maduro, but from the tar sands of northern Canada to the deserts of Kuwait, Venezuelan roughnecks now live in more than 90 oil-producing countries.

“Let’s say, where there is oil, there is a Venezuelan,” Paez said.

Many have made new lives in their adopted countries with no plans to return to a gutted Venezuela. And with each new departure, fewer remain behind with the know-how to pump the world’s most abundant oil reserves, once the economic backbone of a thriving country.

“We are losing man hours, hours of training, millions and millions of hours that we can’t calculate,” said union leader Ivan Freites, secretary of the Federation of Professionals and Technicians of Oil Workers of Venezuela. “It’s impossible to recover our trained personnel working abroad.”

In a recent speech laying out the economic plan for his second six-year term, Maduro vowed to catapult Venezuela’s production to 5 million barrels a day. But he provided few details other than promising to take charge personally and root out corruption.

The embattled president retains support from powerful allies, including Russia and China, which are both heavily invested in Venezuela’s oilfields. Maduro’s hand-picked head of the PDVSA, Maj. Gen. Manuel Quevedo, did not respond to requests for comment by The Associated Press.

While the most-talented engineers left long ago — many contributing to a production boom in neighboring Colombia — there’s still demand for labor throughout the industry.

“It’s those people who are now getting picked up by national oil companies around the world,” Groeneveld added.

The 43-year-old Ribullen said he was thinking of his family when he made the decision to go to Iraq’s oil-rich Kurdish region — which is semi-autonomous from the central government in Baghdad — and leave his wife and children behind until he’s saved enough to send them to Chile or the United States.

As he spoke, his youngest, 9-year-old Isaak, cuddled up next to him on the couch of their living room.  “He doesn’t want me to go,” Ribullen said. “It’s difficult for us.”

He recalled starting work at PDVSA 16 years ago, when he made enough money to buy a Toyota and take his family to the Caribbean island of Aruba on vacation every year. Now, the car is long gone and it’s been seven years since the last family vacation.

Sometimes after his night shift he’s forced to stand in line for hours at the market to buy food for his family. He blames Chavez and Maduro for destroying his country.

Conditions are dangerous at the refinery, where Ribullen says workers clock in every day with memories of a massive explosion that killed dozens of workers in 2012. Workers don’t have company-issued hardhats, boots or gloves.

Once in Iraq’s Kurdish region, he’ll join dozens of other Venezuelan roughnecks who live and work on a remote compound.

“The situation forces me to look for opportunities somewhere else,” he said. “We’re leaving this in God’s hands, asking that he’ll protect us.” /gsg