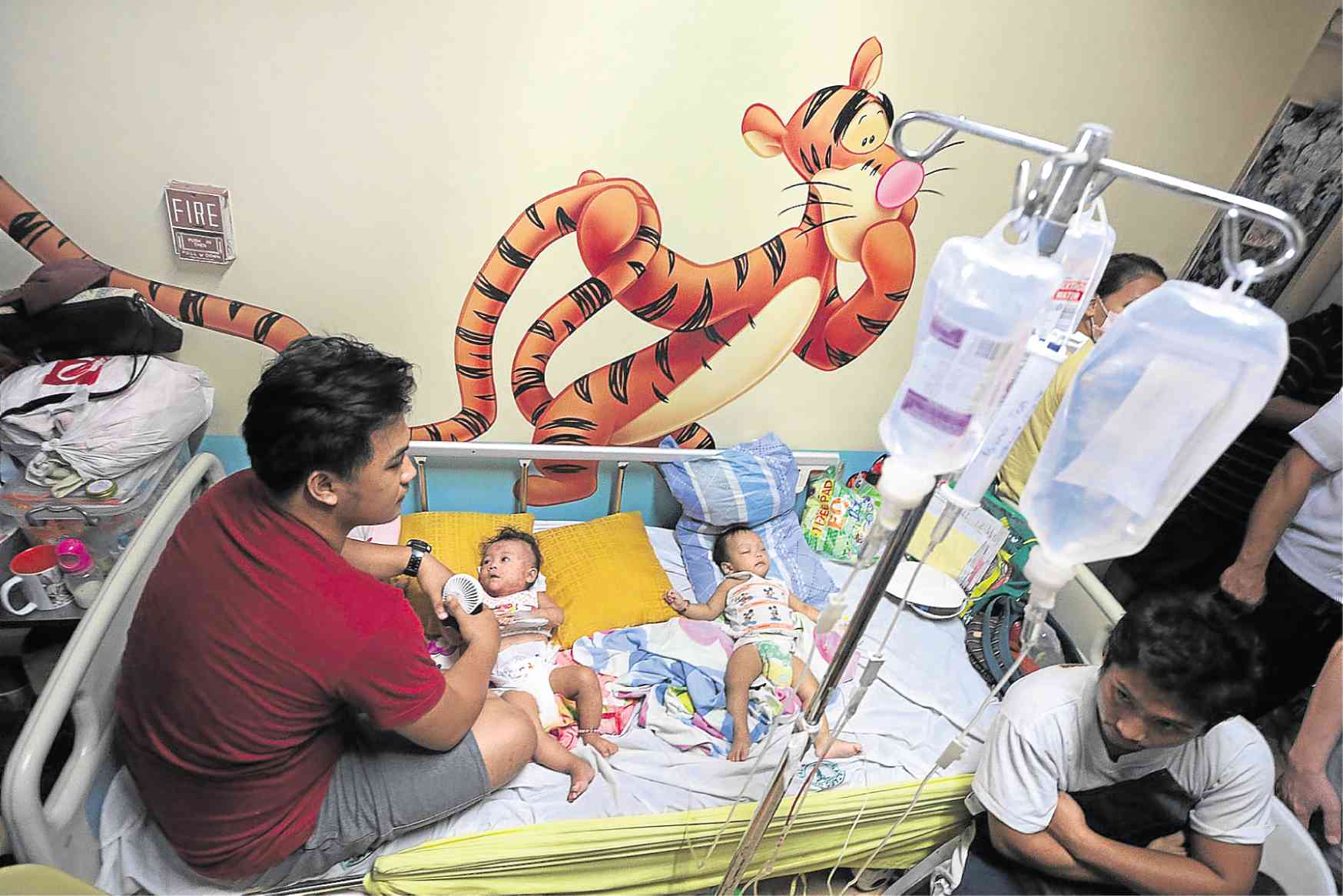 PACKED PEDIA WARD Babies have to share beds at San Lazaro Hospital in Manila as it teems with measles patients on Thursday. The Department of Health urges parents to have infants vaccinated as early as 6 months old against measles when antibodies in their mother’s milk start to wane. —GRIG C. MONTEGRANDE

The Department of Health (DOH) declared measles outbreaks in four more regions—Central Luzon, Calabarzon, Western and Eastern Visayas—which had reported spikes in the number of cases and 18 deaths last month.

A day earlier it declared an outbreak in the National Capital Region where 58 deaths were recorded as of Thursday at San Lazaro Hospital, according to a spokesperson.

Calabarzon reported 575 cases and nine deaths last month; Central Luzon had 192 cases and four deaths; Western Visayas had 104 cases and three deaths and Central Visayas had 71 cases and one death, according to the DOH Epidemiology Bureau.

The figures show a steep rise in the number of measles cases from last year when Calabarzon had 21, Central Luzon had 32, Western Visayas had 16 and Central Visayas had two. The regions reported no measles deaths in January last year.

Health Secretary Francisco Duque III said the rise in infections was caused by a drop in vaccinations triggered by the Dengvaxia scare, which followed the halt of the massive antidengue immunization campaign that used the vaccine developed by the French pharmaceutical giant Sanofi Pasteur.

Sanofi revealed in November 2017 that people who were inoculated with Dengvaxia were at risk of severe dengue if they had not been earlier infected with the mosquito-borne virus.

The Dengvaxia fiasco and the alleged deaths of children caused by the vaccine fueled the scare and prompted charges of neglect, corruption and plunder against Duque and officials of the previous administration, including former President Benigno Aquino III, from Public Attorney’s Office chief Persida Acosta.

“The DOH has been the collateral damage here,” Duque told the Inquirer. “Please help us inform the public that vaccinations are safe.”

The San Lazaro spokesperson, Dr. Ferdinand de Guzman, said most of the 58 who had died at the hospital from Jan. 1 to Feb. 6 were children under 5 years old.

Wilda Silva, director of the DOH’s immunization program, said the virus that caused the respiratory disease was highly contagious and an ill person could quickly infect 18 more.

“So if the virus spreads fast, we have to act faster,” Silva said in an interview.

Duque suggested that babies be vaccinated as early as 6 months old when antibodies against measles in their mother’s milk started to wane.

Panelo said Acosta’s claims that some children had died due to their Dengvaxia inoculation was not discussed during the Cabinet meeting where Mr. Duterte issued the order.

Justice Secretary Menardo Guevarra on Thursday defended Acosta, saying she was “just doing her job and certainly does not intend to scare the public about the possible negative effects of vaccination in general.”

Speaking to reporters about the outbreak earlier, Vice President Leni Robredo urged government officials and the public to refrain from making further irresponsible comments on vaccines.

“Our numbers when it comes to addressing measles had been good and we were already on our way to eradication,” she said. “But because of irresponsible accusations, we are putting the lives of children at risk.”

Dr. Jessie Fantone, head epidemiologist for Central Luzon, said those who died in the region were not vaccinated despite the availability of the anti-measles vaccines at the regional health office.

According to Fantone, there were 1,562 measles cases in the region for the entire 2018 but 442 cases, nearly a third of last year’s total, were recorded in just the first month of the year. The number was more than what was reported by the DOH in Manila. 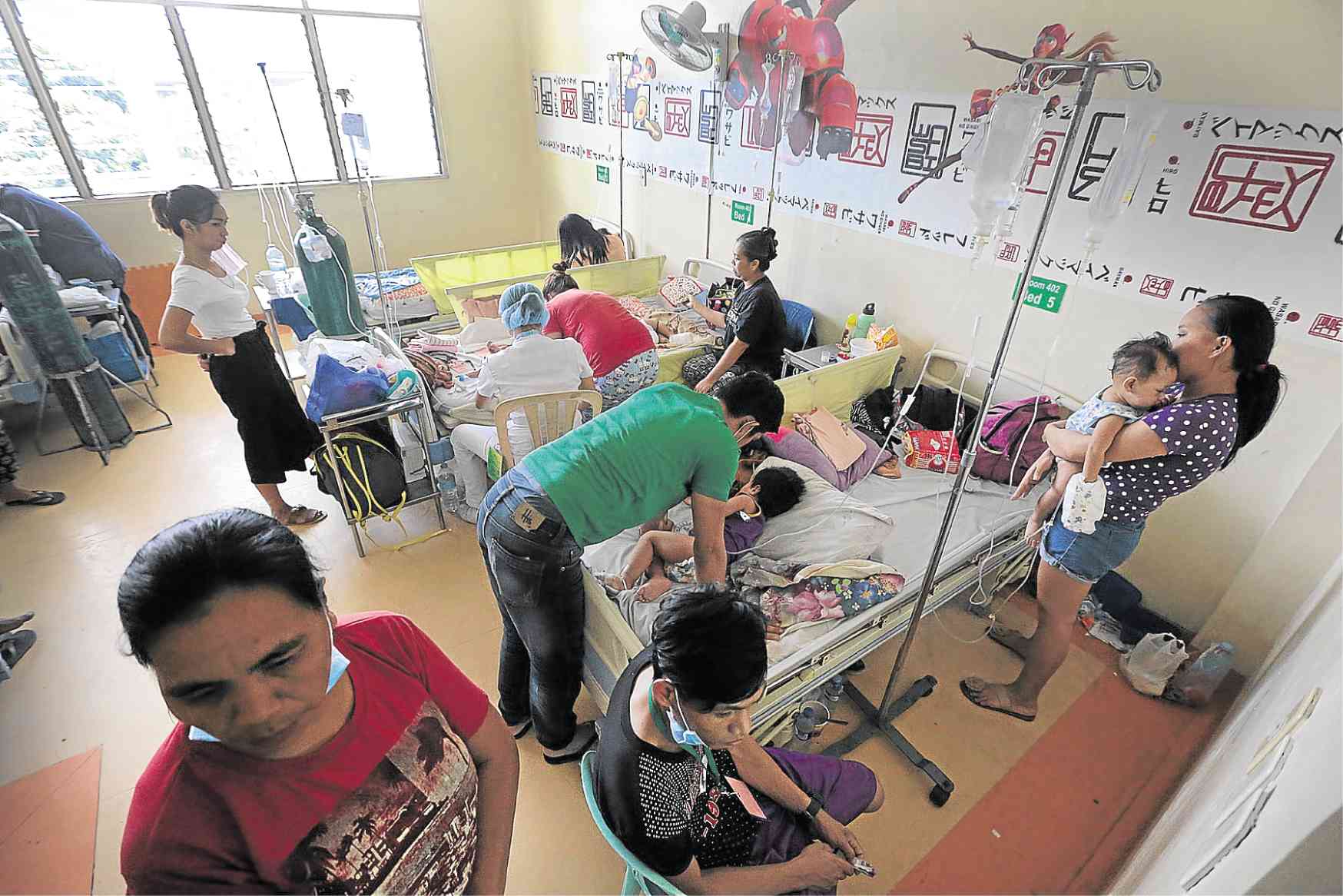 The DOH office in Eastern Visayas, which has not declared an outbreak, reported eight measles deaths just this week and most of the fatalities were babies 6 monts to 9 months old.

The region had at least 241 cases in the first month this year compared to only two measles cases with no death  during the same period in 2018.

In Central Visayas, health authorities reported 96 measles cases with one death from Jan. 1 to Feb. 1, up 2,300 percent from the four cases in the same period last year.