UK economy to grow at weakest since financial crisis

LONDON  — The British economy is set to grow this year by its weakest rate since the global financial crisis as uncertainties over Britain’s exit from the European Union ratchet higher, the Bank of England warned Thursday.

The central bank said the U.K. economy is slowing despite a modest boost from firms stockpiling as they prepare for potential disruption to trade if the country crashes out of the EU with no deal on future relations.

The Bank of England said that the Brexit uncertainties and a weaker global economy overall mean that British growth this year is likely to be 1.2 percent. That’s down sharply from the 1.7 percent predicted in November and below 2018’s 1.4 percent. It would make for the worst year in Britain since a 4.2 percent contraction in 2009.

At its regular policy meeting, the bank’s nine-member Monetary Policy Committee opted to keep its main interest rate at 0.75 percent and said its forecasts depend on what happens with Brexit.

“That outlook depended significantly on the nature of the EU withdrawal,” it said.

With 50 days to go until Britain is scheduled to leave the EU on March 29, there is no clarity on that front.

Last month, Prime Minister Theresa May saw her Brexit deal with the EU rejected overwhelmingly in Parliament. She’s in Brussels Thursday trying to eke out concessions from the EU, particularly on the controversial border provision in the agreement that is intended to make sure no hard border returns between EU member Ireland and Northern Ireland, which is part of the United Kingdom.

It’s unclear she will be able to get any concessions and fears have grown in recent weeks that Britain could crash out of the EU without a deal, a worst-case scenario that the Bank of England has previously said could see the British economy shrink by 8 percent within months and house prices collapse by around a third. The worry is that a ‘no-deal’ Brexit could lead to tariffs on exports to the EU and serious disruption to trade.

For now, the Bank of England is not factoring in a ‘no-deal’ Brexit in its economic assumptions. Its latest forecasts for the British economy published Thursday assume a smooth adjustment to new future trading relations with the EU.

While it remains unclear what Brexit will look like, it is already affecting the economy. Firms have reined back investments the 2016 vote to leave the EU and consumers appear to be more cautious.

Firms are also building up inventories ahead of Brexit to prepare for potential disruption to the seamless supply chains they’ve been accustomed to for decades.

The Bank of England noted that private sector surveys show companies are stockpiling. In its own analysis of companies’ preparations for Brexit, it found that around half of respondents had been building up stock levels or were planning to do so, with two thirds doing so in the manufacturing and consumer services sectors.

If Britain finalizes and approves a deal for a smooth transition to a new trading relationship with the EU, the Bank of England could be in a position to raise interest rates once again. Though inflation is set to dip below the bank’s 2 percent target over the coming months, that’s only expected to be temporary. Its forecasts suggest it would be poised to raise its main interest rate by a quarter of a percentage point this year.

But nothing’s certain as long as Brexit remains unsolved. /gsg 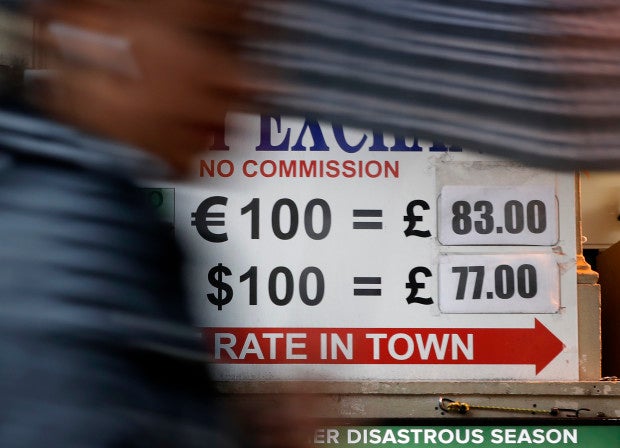 A pedestrian passes a board showing the exchange rates at a money exchange bureau in London, Monday, Jan. 16, 2017. The British pound fell to a three-month low amid reports Prime Minister Theresa May will signal her willingness to make a clean break with the European Union. Sterling fell below 1.20 US Dollars before recovering slightly Monday. (AP Photo/Kirsty Wigglesworth)

Read Next
Mangudadatu asks SC to dismiss petitions vs BOL
EDITORS' PICK
51% of Filipinos think it’s dangerous to publish anything critical about Duterte admin — SWS
PhilHealth mess: Whose heads will roll? Roque says he can’t wait to name names
COVID-19 cases in PH overshoot 122,000 mark
Water remains our saving grace right now
Smart 5G goes live
The biggest lottery jackpot in the world is $158 million, and even someone from the Philippines could win it
MOST READ
Captain astonished that his ship delivered Beirut explosive
‘Vexed’: Guanzon raps Topacio over Alzheimer’s remark
Locsin to China: Don’t overinterpret
COVID-19 cases in PH overshoot 122,000 mark
Don't miss out on the latest news and information.