Unbowed by Trump, Democrats charge ahead with investigations |

Unbowed by Trump, Democrats charge ahead with investigations 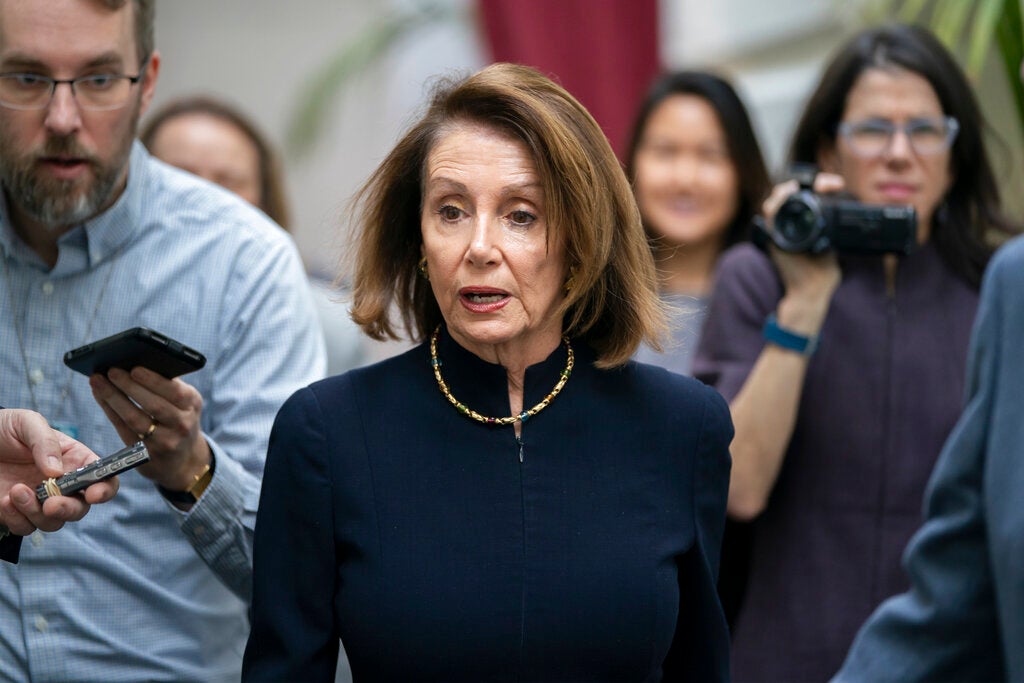 WASHINGTON — President Donald Trump has warned Congress that investigations and legislation don’t mix. But Speaker Nancy Pelosi said such threats have no place in the House, as unbowed Democrats charged ahead Wednesday with plans to probe Trump’s tax returns, business, and ties to Russia.

The chairman of the intelligence committee, Rep. Adam Schiff, announced a broad new investigation into Russian interference in the 2016 election and Trump’s foreign financial interests. Other committees’ actions are well underway.

The day after the president essentially laid out the ultimatum to Congress during his State of the Union address, Democrats appeared even more resolved to conduct oversight of his administration and legislate on their priorities.

“The president should not bring threats to the floor of the House,” Pelosi told reporters, rebuking Trump for saying during his address that the “ridiculous partisan investigations” must end because they could harm the economy.

Pelosi said Congress has a responsibility to provide oversight, under the Constitution’s system of checks and balances, and would be “delinquent” if it failed to do so.

Schiff indicated his committee’s investigation will be sweeping. It will include “the scope and scale” of Russian intervention in the 2016 presidential election, the “extent of any links and/or coordination” between Russians and Trump’s associates, whether foreign actors have sought to hold leverage over Trump or his family and associates, and whether anyone has sought to obstruct any of the relevant investigations.

“We’re going to do our jobs, and the president needs to do his,” Schiff said, noting the probe will go beyond Russia to include leverage by the Saudis “or anyone else.”

Schiff said, “Our job involves making sure that the policy of the United States is being driven by the national interest, not by any financial entanglement, financial leverage or other form of compromise.”

Trump immediately shot back, calling Schiff nothing but a “political hack” who has “no basis to do that.”

“It’s called presidential harassment,” Trump said during an event at the White House as he announced his new pick to head the World Bank.

After eight years in the minority, House Democrats are releasing their bottled-up legislative energy at a time when Trump’s annual joint address to Congress lacked many new initiatives of his own.

The Democrats’ agenda goes beyond oversight of Trump’s administration and Russian election interference to the bread-and-butter issues of jobs, health care and the economy that propelled them to the House majority. Pelosi said they still hope to work with the White House on shared priorities, particularly on lowering prescription drug costs and investing in infrastructure.

On Wednesday, one House committee held a hearing on gun violence. Two others gaveled in to address climate change. And three more were debating protecting people with pre-existing medical conditions and the Affordable Care Act.

The Foreign Affairs Committee was debating the war in Yemen and a war powers resolution to halt U.S. involvement in the Saudi-led coalition.

Rep. Elijah Cummings of Maryland, the chairman of the Oversight Committee, said Trump has to understand “that he has to be accountable.”

“It’s not about partisan investigations,” said Cummings. “We all have to be accountable. And it’s a new day.”

The flurry of activity brought a turn of events for the new Congress. Democrats had been off to a rough start as the 35-day government shutdown jammed the agenda and stifled the energetic freshmen class that swept the party to power in the midterm election.

With the longest government closure over, for now, the new majority is eager to deliver on its promises before the next election shifts attention yet again.

Pelosi made a calculation after the election to forego a traditional 100-days agenda — or the 100-hours to-do list she rolled out in 2007, the last time Democrats had the majority — in favor of a return to the legislative process.

It’s partly a nod to the diverse Democratic majority, whose members hold different views on some issues. But it’s also a part of Democrats’ efforts to revive traditional governing, rather than lurching from crisis to crisis, as had become the norm when Republicans were unable to control their often unruly conservative flank. Under new House rules, every bill must pass through committee before coming to a vote on the floor.

James Curry, an associate professor of political science at the University of Utah, said Democrats have a short window to capture the public’s attention. “They want to show voters they can legislate, they can run the government, they can do the things they said they’re going to do,” he said.

“Reality,” Curry added, “is obviously more complicated than that.”

Much of the House’s legislation will fall flat in the Senate, where Republicans retain control. Majority Leader Mitch McConnell is expected to ensure his chamber serves as a backstop to prevent Democratic bills from landing on Trump’s desk — although the Senate’s own bipartisan investigation into Russian election interference continues.

The more likely result is that the legislative agenda sets the stage for the next election, in 2020, when voters will be assessing not only the performance of the new House majority but also which party they prefer in the White House.

This month, Democrats expect to pass H.R. 1, a sweeping reform of campaign finance and voting rights laws, and then turn to legislation to expand background checks for sales and transfers of firearms.

At the Natural Resources Committee, overflow crowds of school kids, environmental activists and others turned out for the first of what Chairman Raul Grijalva promises will be a month of hearings on the effect of climate change on coastal communities, national parks and other areas under the committee’s oversight.

“Today we turn the page from climate denial to climate action,” said Grijalva, an Arizona Democrat.

The chairman of the House Judiciary Committee, Rep. Jerrold Nadler of New York, expressed disappointment that Trump did not mention gun violence in his State of the Union address Tuesday night.

“It is evident from the energy and the crowd in this room, as well as the millions of people across the country fighting for sensible gun safety laws, that the public is demanding national legislation,” Nadler said as he gaveled open the hearing.

But Rep. Doug Collins of Georgia, the top Republican on the judiciary panel, called the background checks measure a “fraud” that promises protection against gun violence without achieving it.

The House intelligence committee also voted Wednesday to send the transcripts from the panel’s earlier Russia investigation to special counsel Robert Mueller. Republicans ended that probe in March, concluding there was no evidence of conspiracy or collusion between Russia and Trump’s presidential campaign. Democrats strongly objected at the time, saying the move was premature.