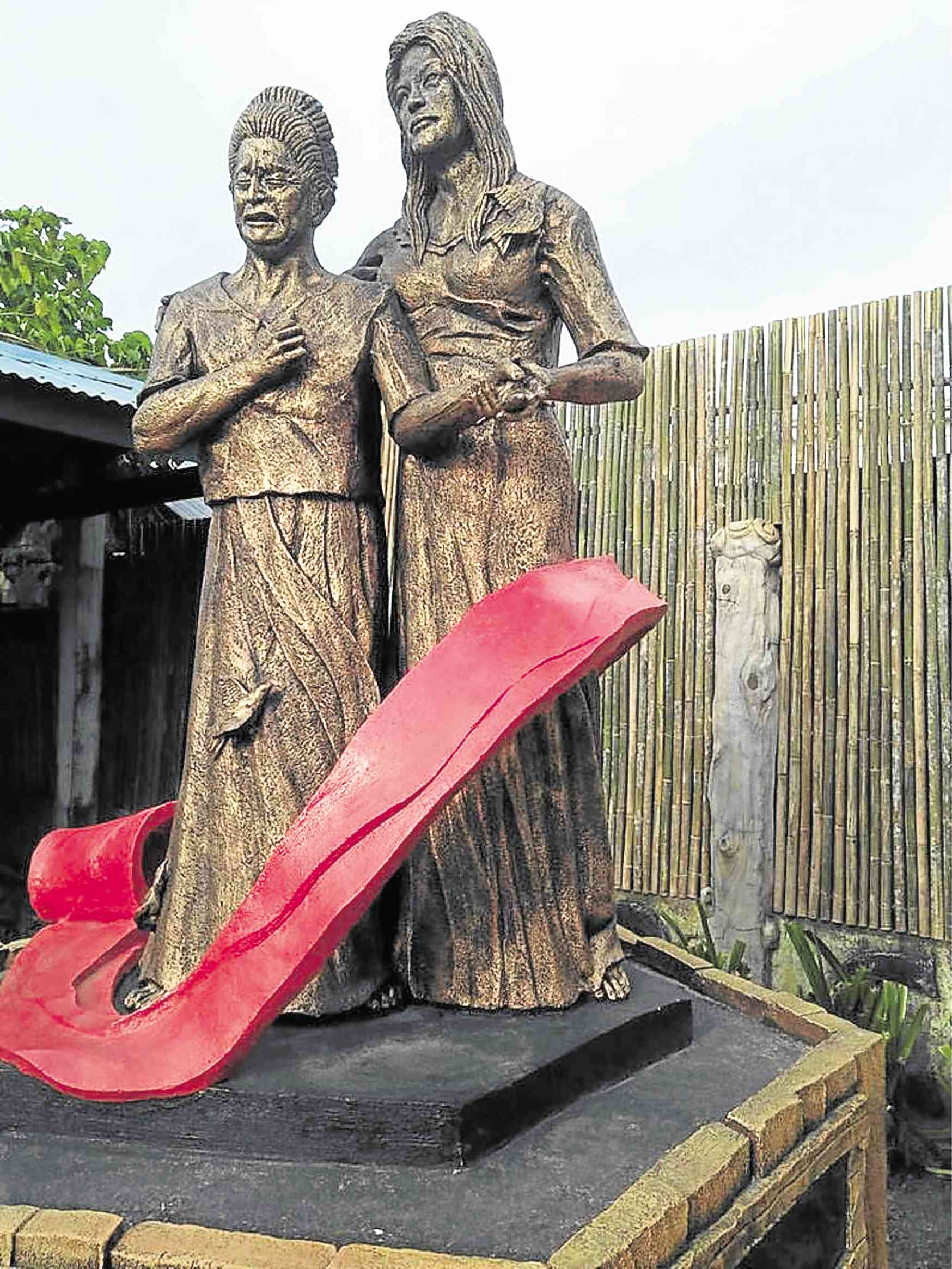 REMINDER Groups on Panay Island say this statue representing a comfort woman and rape victims is a reminder that violence against women takes many forms. —FROM NELIA SANCHO’S FACEBOOK

ILOILO CITY — When tourists visit Boracay Island, a statue representing women raped by Japanese soldiers will welcome them at the jetty port in Malay town, Aklan.

The lifesize statue of two women stands on the property owned by the family of women’s rights activist Nelia Sancho at Barangay Caticlan.

Sancho’s property is located along Caticlan Jetty Port Road, about a two-minute walk from the port where Boracay-bound tourists board passenger boats.

The unveiling of the statue on Tuesday in Caticlan was attended by women’s rights activists from other countries and by two comfort women, according to Sancho.

Sancho, Manila coordinator of the International Solidarity Council for Redress, said she decided to put up the statue inside her family’s property after similar statues on Roxas Boulevard in Manila and in San Pedro City in Laguna province were removed amid protests supposedly from the Japanese government.

“We plan to invite schools and universities in Panay to visit the statue,” Sancho told the Inquirer by telephone.

She said a memorabilia center would be put up near the statue to help educate students and other visitors on the plight of comfort women and rape victims.

Sancho said that of all the governments dealing with issues relating to comfort women, only the Philippines had kowtowed to Tokyo’s whims.

“The ‘lolas’ are dying and we didn’t want the issue to die with them,” Sancho said in a press conference in Manila on Monday, a day before the unveiling.

Lola refers to Filipino women who were used as sex slaves by Japanese soldiers during World War II.

Sancho said the issue should be remembered and resolved, not buried and forgotten.

She said she was in her 30s when her fight to seek justice for comfort women began. Sancho is now 64.

An estimated 1,000 Filipino girls served as comfort women during the 1941-1945 Japanese Occupation, while a United Nations investigation found that as many as 200,000 from Asia had been enslaved from 1932 until the war ended in 1945.

According to Lila Pilipina, an organization of former comfort women, about 20 of some 200 women who had surfaced to tell their stories are still alive.

Japan has not officially acknowledged the comfort women and it has not apologized to them.

Hundreds of women were enslaved when the Japanese occupied the Philippines. In the mornings, these women were forced to do menial chores, such as laundry, cooking and cleaning. At night, Japanese soldiers took turns in raping them.

One of them was 93-year-old Fidencia David. She was only 13 when Japanese soldiers abducted and abused her at a garrison in Pangasinan province.

David was released 10 days later but the horrors and scars of her ordeal remain until now. “The pain keeps coming back each time the issue is reopened,” she said during the Monday press briefing.

“We need symbolisms like this to remind us that historically, there has been institutional violence against women and the victims continue to seek justice,” said Barby Badayos-Jover, director of the University of the Philippines Visayas gender development program and coordinator of the Ugsad Gender Resource Center.

The statue may be offensive to some but is a “necessary reminder that violence against women continues and takes many forms,” Jover said.

Lucy Francisco of Gabriela Women’s Party said the statue would help educate the younger generations “on the horrors faced by women during the war and the need to campaign against all forms of violence against women.” —WITH REPORTS FROM MARIELLE MEDINA AND ANNE BARRIENTOS, INQUIRER RESEARCH