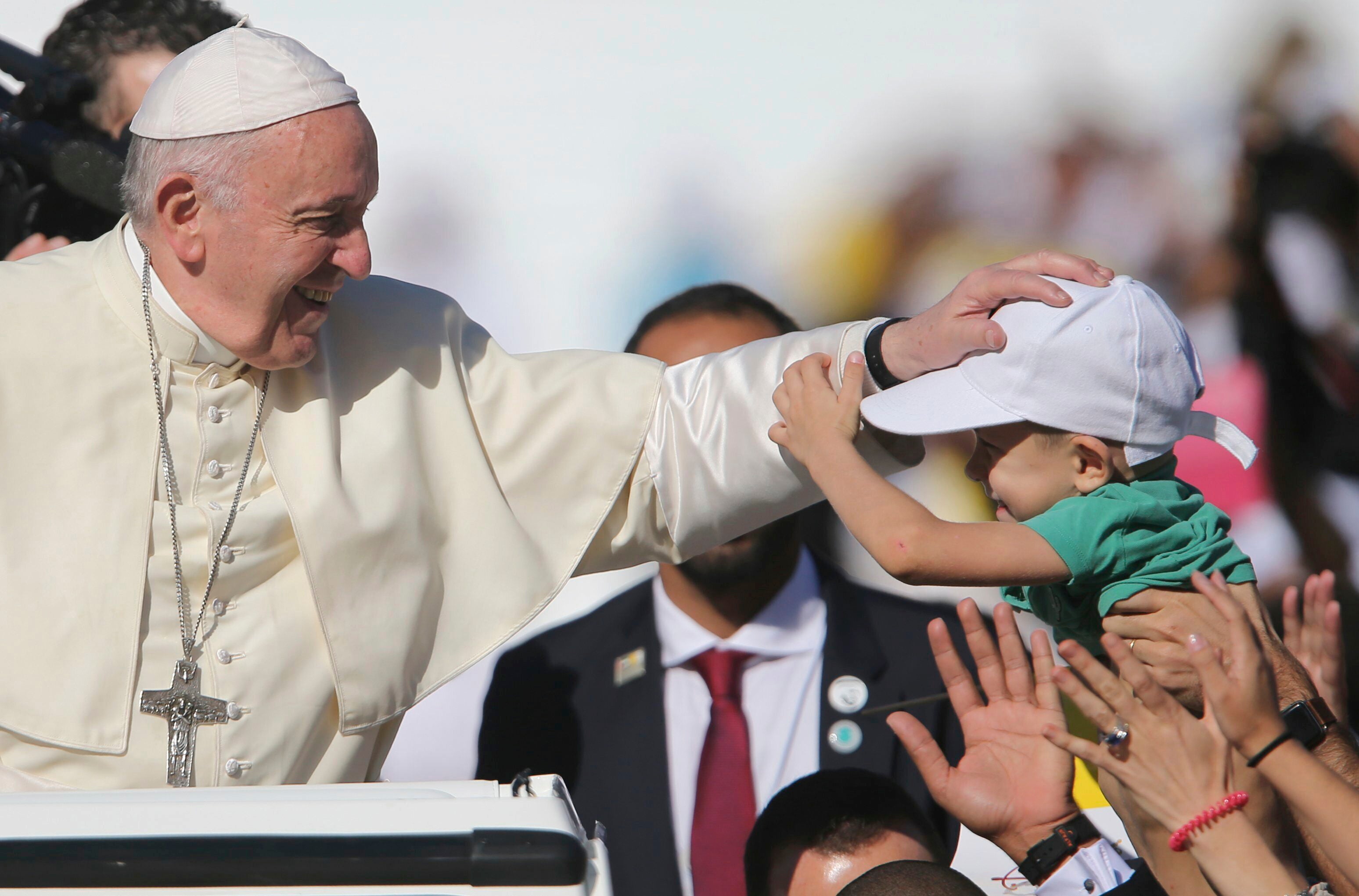 Pope Francis blesses a boy during a Mass at the Sheikh Zayed Sports City in Abu Dhabi, United Arab Emirates, Tuesday, Feb. 5, 2019. Francis travelled to Abu Dhabi to participate in a conference on inter religious dialogue sponsored the Emirates-based Muslim Council of Elders, an initiative that seeks to counter religious fanaticism by promoting a moderate brand of Islam. (AP)

ABOARD THE PAPAL PLANE — Pope Francis on Tuesday publicly acknowledged the scandal of priests and bishops sexually abusing nuns and vowed to do more to fight the problem, the latest sign that there is no end in sight to the Catholic Church’s abuse crisis — and that it now has a reckoning from the #MeToo movement.

Francis admitted to the problem for the first time in public during a news conference while returning to Rome from the United Arab Emirates. The acknowledgment comes just two weeks before he hosts an unprecedented gathering of bishops to craft a global response to the scandal of priestly predators who target children and the superiors who covered up the crimes.

Francis was asked about priests who target adult women — the religious sisters who are the backbone of the Catholic Church’s education, health care and social service ministries around the globe — and whether the Holy See might consider a similar universal approach to combat that issue.

“It’s not that everyone does this, but there have been priests and bishops who have,” Francis told reporters. “And I think that it’s continuing because it’s not like once you realize it that it stops. It continues. And for some time we’ve been working on it.”

“Should we do something more? Yes. Is there the will? Yes. But it’s a path that we have already begun,” Francis said.

The issue has come to the fore amid the Catholic Church’s overall reckoning with the sexual abuse of minors and the #MeToo-inspired acknowledgement that adults can be victims of abuse whenever there is an imbalance of power in a relationship. In the past year, The Associated Press and other media have reported on cases of abused nuns in India, Africa, Europe and South America — evidence that the problem is by no means limited to a certain geographic area.

In November, the organization representing all the world’s female Catholic religious orders, the International Union of Superiors General, publicly denounced the “culture of silence and secrecy” that prevented nuns from speaking out and urged sisters to report abuse to their superiors and police. And just last week, the women’s magazine of the Vatican newspaper L’Osservatore Romano identified the clerical culture of the all-powerful clergy as the culprit.

The magazine, “Women Church World,” noted that the scandal involves a corollary: nuns being forced to abort the priests’ children or bear children that the priests refuse to recognize.

Francis’ acknowledgement of the problem comes as he prepares to decide the fate of the disgraced American ex-cardinal, Theodore McCarrick, who is accused of abusing minors as well as adult seminarians. That case also cast a spotlight on the issue of abusive power relationships, and whether the Catholic Church ought to consider seminarians and sisters as “vulnerable adults” when compared to the priests and bishops who control everything from their vocations to their studies and salaries.

Francis noted that Pope Benedict XVI had taken action against a France-based order that admitted the priest who founded it had violated his chastity vows with his female recruits. Francis said the sisters had been reduced to “sexual slavery” at the hands of the Rev. Marie-Dominique Philippe and other priests.

The Community of St. Jean admitted in 2013 that Philippe had behaved “in ways that went against chastity” with several women in the order, according to the French Catholic newspaper La Croix. Francis’ comments about “sexual slavery” suggested that the relations were not consensual and could have involved abuse of conscience and power as well.

Phillipe died in 2006. Three years later, the local bishop imposed a new superior on the order’s contemplative branch of nuns. Some rejected the new leader and followed their old female superior to found a new institute in Spain. Benedict eventually dissolved that, a decision Francis held up Tuesday as evidence of Benedict’s hard line in the case.

He said Benedict acted “because a certain slavery of women had crept in, slavery to the point of sexual slavery on the part of clergy or the founder,” he said.

“Sometimes the founder takes away, or empties the freedom of the sisters. It can come to this,” Francis said.

Asked if any universal norms might be in the works to tackle the problem — as has been done to handle cases of clergy sexual abuse of minors — Francis implied that the priestly abuse of nuns was still being dealt with on a case-by-case basis.

“There are cases, usually in new congregations and in some regions more than others,” he said. “We’re working on it.”

“Pray that this goes forward,” he said of the Vatican efforts to fight it. “I want it to go forward.”