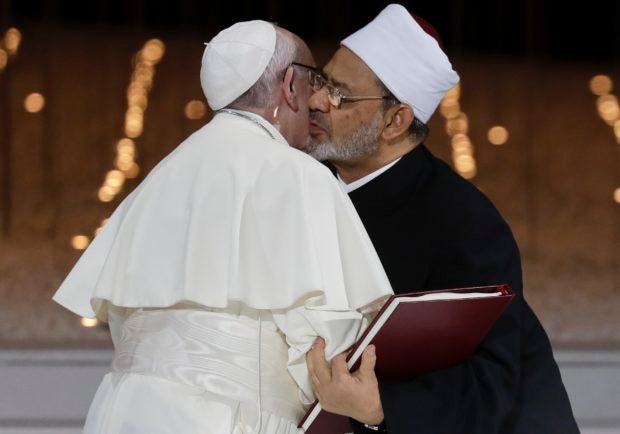 Pope Francis hugs Sheikh Ahmed el-Tayeb, the grand imam of Egypt’s Al-Azhar, after an Interreligious meeting at the Founder’s Memorial in Abu Dhabi, United Arab Emirates, Monday, Feb. 4, 2019. Pope Francis has asserted in the first-ever papal visit to the Arabian Peninsula that religious leaders have a duty to reject all war and commit themselves to dialogue. (AP Photo/Andrew Medichini)

A day after making a broad appeal for Christian and Muslim leaders to work together to promote peace and reject war, Francis visits a cathedral in Abu Dhabi and then celebrates Mass in the Zayed Sports City Stadium.

The Emirates’ Catholic community is something an anomaly for the region, large, diverse and thriving at a time when the wider Mideast has seen an exodus of Christians fleeing persecution at the hands of the Islamic State group and others.

The Catholic Church estimates as many as 1 million of the over 9 million people living in the UAE are Catholic, nearly all of them foreigners drawn to the oil-rich federation to work in everything from white-collar finance to construction. Most are Filipino and Indian, many of whom have left behind families for work and can face precarious labor conditions, which human rights groups regularly denounce.

On Monday, the pope met with Emirati leaders and signed a document promoting “human fraternity” with Sheikh Ahmed el-Tayeb, the grand imam of Egypt’s Al-Azhar, the revered 1,000-year-old seat of Sunni learning. He also urged religious leaders to work together to reject the “miserable crudeness” of war and resist the “logic of armed power … the arming of borders, the raising of walls.”

There is no alternative: We will either build the future together or there will not be a future,” Francis told Abu Dhabi’s powerful crown prince and hundreds of imams, muftis, ministers, rabbis and swamis gathered in the Emirati capital at a time when the UAE-backed Saudi war in Yemen has driven the Arab world’s poorest country to the brink of famine.

“God is with those who seek peace,” Francis added.

Francis’ visit, 800 years after his peace-loving namesake St. Francis of Assisi visited an Egyptian sultan, marked the culmination of years of Holy See efforts to improve relations with the Muslim world after they hit a low during the papacy of Pope Benedict XVI. Since then, religious fanaticism and faith-inspired wars have only grown around the globe, inspiring the pontiff’s efforts to promote tolerance and understanding. /gsg