Benguet community races against time to save Apo Anno 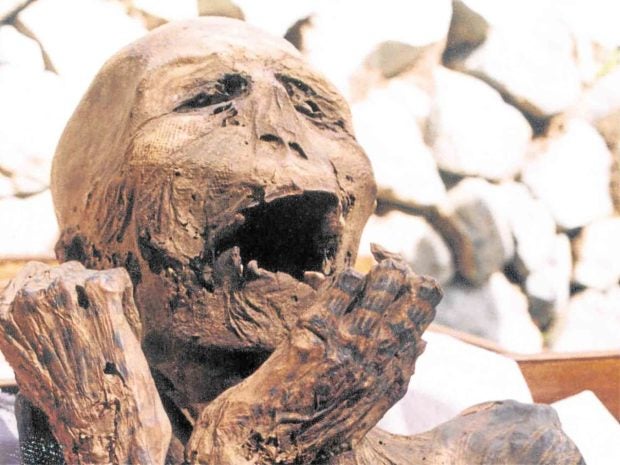 BUGUIAS, Benguet — Local officials and residents here are racing to preserve what is left of Apo Anno, whose mummified remains placed the country in the global archaeological map.

Mayor Ruben Tinda-an said the remains of the century-old mummy showed signs of fungal invasion based on the latest inspection they did with National Museum officials.

White spots were seen contaminating portions of Apo Anno, revered as a demigod in Kankanaey mythology, he said.

“We have been warned by the National Museum that Apo Anno will deteriorate if we will not preserve its pristine condition,” Tinda-an said.

Frequent opening of the mummy’s coffin and mishandling the body caused Apo Anno to deteriorate, he said, adding that the National Museum had been sending its personnel to regularly check the mummy and treat the fungi.

“Inspectors from the National Museum told us to avoid using unnatural intervention [in treating the fungi],” Tinda-an said.

Apo Anno, a Kankanaey hunter, was the son of Tugtugaka, a village chief, and Cuyapon, a forest guardian and fairy.

His mummified body was tattooed heavily with symbolism indicating he was a revered leader.

It was stolen sometime in 1918, according to records from the provincial tourism office.

The mummy was seen at a carnival in Manila in 1922 then at an antique shop in 1984 where it was taken by the National Museum.

In May 1999, Benguet elders and officials took the mummy back home and returned it to its burial cave at Sitio Nabalicong in Barangay Natubleng here. They placed a gate and lock over the cave.

However, Apo Anno’s original coffin, a hollow tree decorated with etchings and a deer horn, could no longer be located, Tinda-an said.

Following the mummy’s return, Buguias’ string of misfortune, such as landslides and heavy rains, stopped and the town seemingly flourished.

With over 9,000 hectares production area, Buguias is the country’s top vegetable producing town.

In 2016, Tinda-an ordered Barangay Natubleng officials, the caretakers of the burial cave, to stop the public viewing of Apo Anno.

The coffin, however, can only be viewed from the gate.

In 2017, the town government drafted a master plan to develop the area into a park for tourists.

Last year, villagers began to put a riprap around the area as they anticipated tourist influx after the local government received no support from the Department of Tourism, Tinda-an said.

The park will be part of an ecotourism circuit, which includes the pool below the falls where Tugtugaka supposedly received Apo Anno as a baby from his fairy mother.

The park was designed as natural as possible, Tinda-an said.

The mummy will be moved deeper inside the cave while a replica of Apo Anno will be open for public viewing.

“If we fail to preserve Apo Anno, his deterioration might bring us disaster, as was told in tales of old,” the mayor said.