DILG says that after restaurants, next on its list of targets are hotels and malls
By: Jaymee T. Gamil - Reporter / @jgamilINQ
Philippine Daily Inquirer / 05:04 AM February 05, 2019 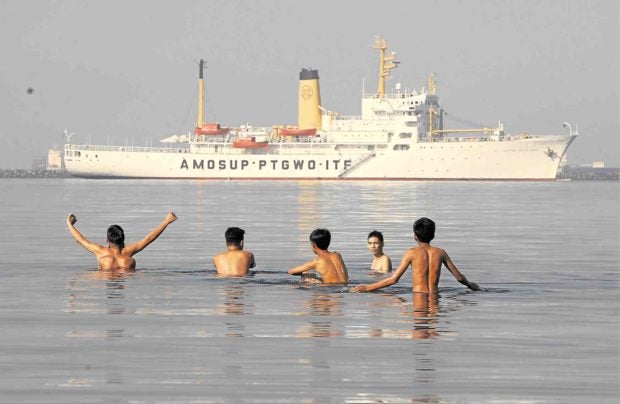 TOXIC WATERS A group of men goes swimming in Manila Bay despite the health department’s warning that bathing in its water can lead to gastrointestinal and skin diseases. —MARIANNE BERMUDEZ

Hotels and malls that contribute to pollution in Manila Bay are the government’s next targets in its ongoing cleanup campaign.

“There are hotels and even malls we will order closed due to their water discharge failing [standards] and worsening pollution on Manila Bay,” Interior Secretary Eduardo Año said in a speech at the Barangay Summit on Peace and Order in Palo, Leyte, last week.

Last month, the Laguna Lake Development Authority (LLDA) issued cease-and-desist orders against three popular restaurants along the bay—Aristocrat and Gloria Maris in Manila and The Esplanade (San Miguel by the Bay) in Pasay City.

The LLDA ordered the shutdown of the restaurants’ water sources and discharge facilities after they were found to be dumping untreated wastewater into Manila Bay.

Earlier, the LLDA also issued notices of violations to an inn, a seaside restaurant, and establishments under the SM Group of Companies in Pasay City.

Año said that the Department of the Interior and Local Government (DILG) would look into the possible administrative and criminal liabilities of local governments found to have issued permits to errant establishments.

In a memorandum circular issued on Jan. 24, he also ordered officials of the 178 cities and municipalities and 5,714 barangays along Manila Bay and its inland tributaries in Metro Manila, Calabarzon and Central Luzon to conduct cleanup drives on the coasts every Saturday.

“We will be measuring the trash hauled away [from the water bodies]… We will do this until the garbage is all gone and until discipline and cleanliness are just a part of life for the communities,” Año told summit delegates.

The 178 local government officials with jurisdiction over the Manila Bay watershed area will attend a meeting on the rehabilitation campaign on Feb. 8.

In an advisory on Monday, the Department of Health (DOH) said that while parts of the bay might be free of trash, this did not mean that the public could already swim in its waters.

According to the DOH, further tests were needed on the water’s chemical and physical quality as well as its coliform levels.

“While the cleanup is ongoing, the public is strongly advised to wait until the waters are deemed safe for recreational swimming,” it said.

The DOH added that for the bay to be deemed safe for bathing, its waters should have a coliform level of fewer than 100 mpn (most probable number) per 100 milliliters.

However, earlier results showed that its level of coliform, or contaminants present in the water such as fecal matter, was at 330 million mpn.

The DOH said that swimming in the bay might lead to gastrointestinal diseases and skin infections. —With a report from Jovic Yee

Read Next
Blame reenacted budget for 2019 on ‘pork wars’
EDITORS' PICK
Smart celebrates all kinds of ‘#SimplyLove’ for Pride Month
WATCH: INQside Look with Fil-Am actress Aina Dumlao
SWS: Over 12M Filipinos still jobless as of May 2021
SANTIS Delicatessen: The road to survival is sweet and savory
Smart brings KCON:TACT especially 4U to subscribers from June 19 to 27
Dizon: 40 of 119 ‘Build’ projects done by 2022
MOST READ
William Martinez sometimes feels his kids ‘don’t remember’ him anymore
Landmark tale of corruption
ICC case vs Duterte may take 3 months in pretrial body
Dizon: 40 of 119 ‘Build’ projects done by 2022
Don't miss out on the latest news and information.